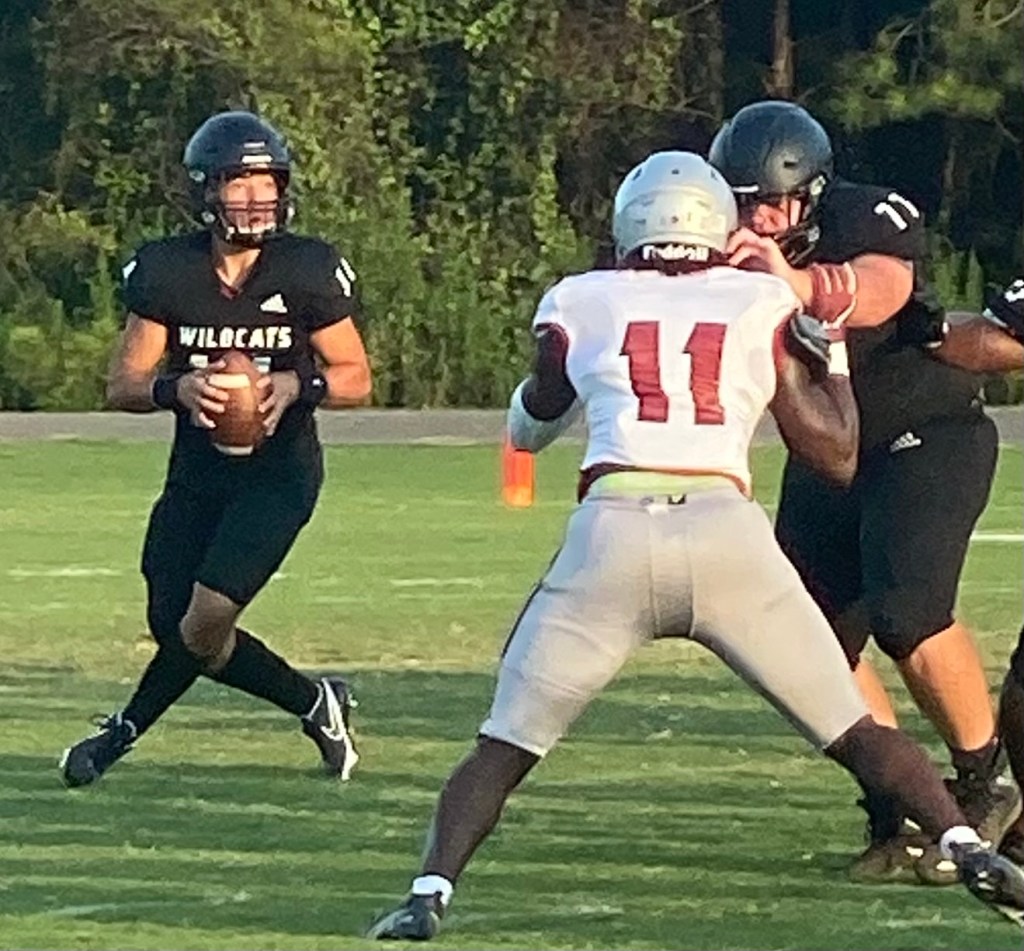 Schley County quarterback Jay Kanazawa is back to throw against Irwin County. Photo by Ken Gustafson

ELLAVILLE – As was the case a year ago at this time, both Schley County (SC) and Irwin County (IC) faced off against each other in a hard-fought pre-season scrimmage to prepare each other for the rigors of their 2022 regular seasons. A year ago in Ocilla, the Indians won in a high-powered 40-21 shootout and on Friday night at Wildcat Field, the Indians took control early and once again earned the victory. While the SC defense played well for most of the contest, the offense struggled with numerous penalties and six turnovers on the night. As a result, they could not overcome two early touchdowns scored by the Indians in the first quarter and would go on to lose the scrimmage rematch by the score of 34-14. 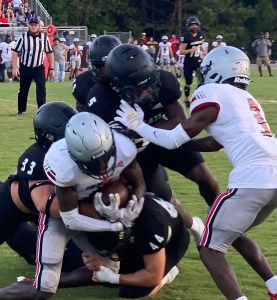 In spite of the loss, SC Head Coach Daren Alford realizes that this is just a scrimmage. Though he knows there is still much improvement to be done before the start of the regular season, he did see some positive things that his team can build on.

“We responded to adversity and played much better after the first quarter. I thought we ran the ball decent versus a good team,” Alford said.

The Wildcats won the toss and elected to receive, but they turned it over deep in their own territory when quarterback Jay Kanazawa’s pass was intercepted by Bryce Clements. This put the Indians at the SC 27-yard line. A couple of plays later, they capitalized when quarterback Cody Soliday rolled to his right and threw a pass to Damarkas Lundy for a twelve-yard touchdown. The extra point by Evan Ross was good and the Wildcats trailed 7-0 early in the first quarter. 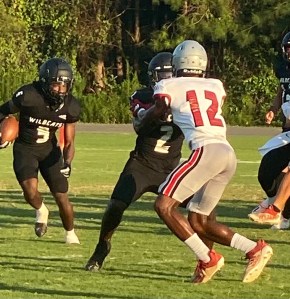 Schley County running back Malachi Banks (#5) caries the football behind the blocking of JaLewis Solomon (#2).
Photo by Ken Gustafson

SC tried to get its offense going on its next possession, but the Wildcats were not able to move the football and were forced to punt. On their next possession, the Indians were able to move the ball down the field and cap off their drive with a one-yard touchdown run by running back Shane Marshall. Ross’s extra point was good and the Indians led 14-0.

The Wildcats continued to struggle on offense for the remainder of the first half. Late in the half, Kanazawa’s pass was intercepted by Ulysses Tomblin. This would eventually lead to another touchdown by the Indians, as Lundy scored his second touchdown of the game from one yard out. Ross’s extra point was good and the Wildcats trailed 21-0 in the closing minutes of the first half. 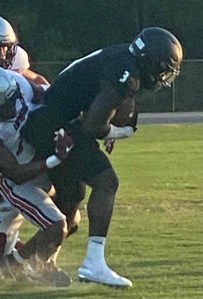 SC did have a promising drive going in the closing seconds. Kanazawa was able to complete a pass to Clinton Jackson at the IC 30-yard line. However, a false start penalty was called against the Wildcats, moving the ball back to midfield. This was followed by another false start penalty against SC. As a result, the Wildcats went into halftime trailing 21-0.

The SC offense got off to a good start in the second half, as running back Zayden Walker was able to carry the ball 23 yards down into IC territory. A couple plays later, the Wildcats had the ball first and 10 from the IC 20 and Walker was able to break through the Indians’ defense and score from 20 yards out. The extra point by Miguel Yanez-Rueda was good and the Wildcats were on the scoreboard, trailing 21-7 with a little over seven minutes left in the third quarter. 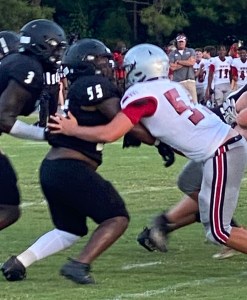 The SC defense quickly went to work on the Indians’ nest possession and forced a three and out. The Wildcats were able to tackle Lundy in the backfield for a loss and Carson Westbrook came up with a play to force fourth down.

However, the Wildcats turned the ball over for the fourth time of the game when Kanazawa’s long pass, which was intended for JaLewis Solomon, was intercepted by defensive back Bo Payne. Shortly thereafter, the Indians capitalized when Lundy scampered 64 yards for another IC touchdown. The extra point was good and the Wildcats found themselves trailing the Indians 28-7 late in the third quarter. 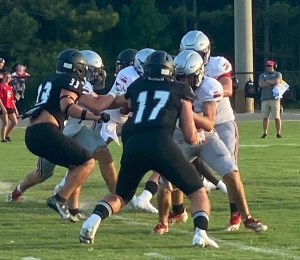 However, SC responded on its next possession when Kanazawa threw a pass to Clinton Jackson, Who ran the ball 46 yards down into IC territory.

However, the interception bug bit the Wildcats once again, as Kanazawa’s pass into the end zone was intercepted once again by Bo Payne, snuffing out an otherwise productive drive. 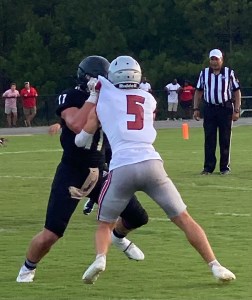 However, the SC defense rose up again and made a huge play. IC had the ball on their won one-yard line, but the SC defense forced a fumble and Matthew Kuipers recovered the ball in the end zone for a Wildcats touchdown. The extra point by Yanez-Rueda was good and SC trailed 28-14 late in the third quarter.

In the fourth quarter, both squads played their junior varsity players so that they could get some valuable experience. Both offenses each had the ball for six minutes to finish out the fourth quarter. The IC JV squad was able to get a touchdown when Tres Ellison scored from seven yards out. 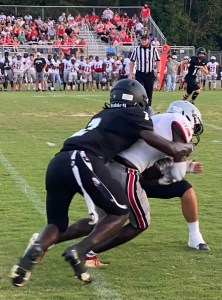