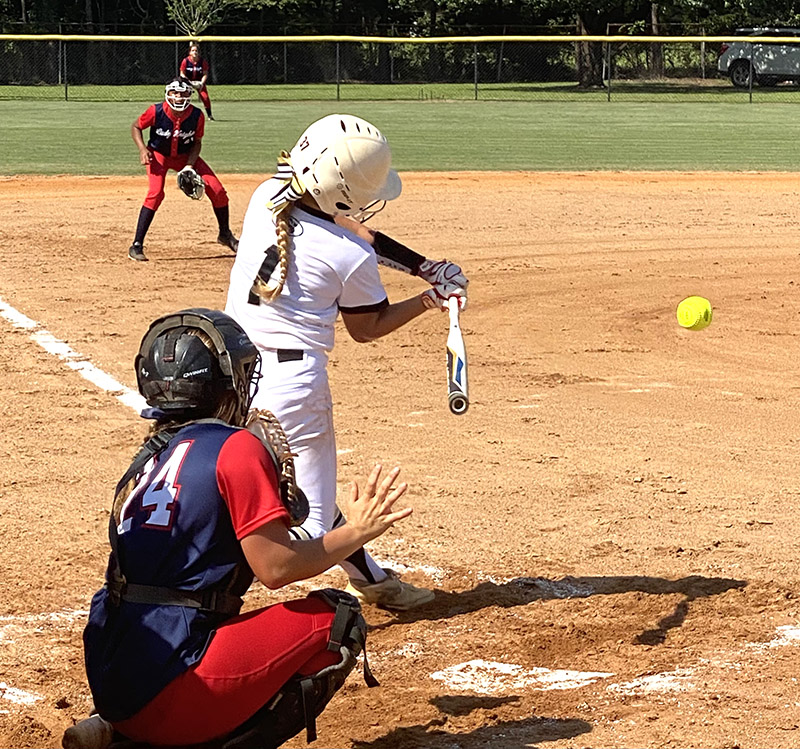 Southland Academy’s Avery Ledger went 1 for 3 with a double in the Lady Raiders’ 16-4 loss to Windsor Academy. ATR Archive

MACON – The Southland Academy Lady Raiders Softball Team (SAR) was hoping to begin the 2022 season on a positive note when they made the trip up to Macon to take on Windsor Academy (WA) on Monday, August 15. However, they Lady Knights jumped out to a 5-0 lead in the first inning and would later score 10 runs in the fourth on their way to a 16-4 rout of SAR.

The Lady Knights out hit the Lady Raiders 7-5, but they were aided by four errors committed by SAR on the day.

In the bottom of the first, WA scored five runs on one hit and took advantage of four walks, two hit batsmen and one error.

SAR got back in the game in the top of the second by scoring three runs on two hits and taking advantage of a walk, an error and a hit batsman.

In the top of the third, the Lady Raiders got to within a run at 5-4 when Landry Hart scored on a wild pitch, but that would be as close as they would get as the Lady Knights erupted with 10 runs on six hits. This effectively run ruled the game and gave WA the 16-4 victory.
Maddie and Alyssa Godwin both went 1 for 1 at the plate with singles and both scored a run for SAR. Lauren Duke drove in two runs and Landry Hart, Morgan Weaver and Avery Ledger each had a hit in the game.

Maddie Godwin got the start in the circle for the Lady Raiders, but struggled in the early going. Godwin gave up five runs on just one hit, but walked four while striking out one.
The Lady Raiders will try to earn their first win of the season when they travel down to Damascus, GA on Thursday, August 18 to take on Southwest Georgia Academy. First pitch of that game is scheduled for 4 p.m.

The Lady Raiders’ next four games will be on the road and their first home game of the season will be on Tuesday, August 30 against Westwood at 4 p.m.