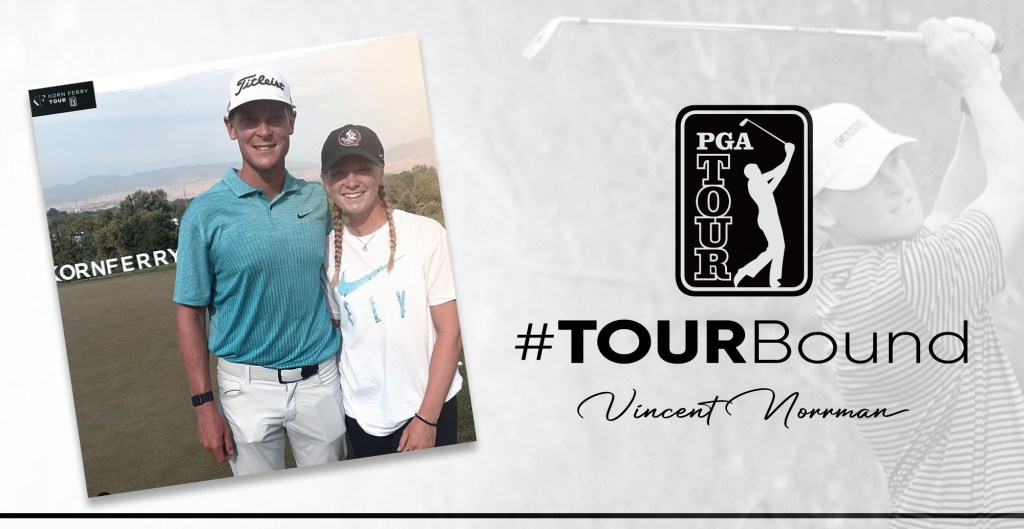 Former GSW standout golfer Vincent Norman has qualified for the PGA Tour for the 2022-23 season following his success on the Korn Ferry Tour. Photo by GSW Athletics

ELKHORN, NE – Former Georgia Southwestern State University All-America selection Vincent Norrman earned an invitation on Sunday to play on the PGA Tour for the 2022-23 season following his success on the Korn Ferry Tour.

The Korn Ferry Tour regular season concluded Sunday afternoon at the Pinnacle Bank Championship presented by Aetna, as 25 PGA Tour cards were awarded in a ceremony on No. 18 green at The Club at Indian Creek. The top 25 players on the cumulative 23-event Korn Ferry Tour Regular Season Eligibility Points List earned PGA Tour cards for the 2022-23 season, which begins at next month’s Fortinet Championship in California.

Norrman, a 24-year-old native of Stockholm, Sweden, starred for the Hurricanes from 2017-20. He was in the midst of a historic season at GSW in the spring of 2020 when it was cut short by the coronavirus pandemic and the subsequent cancellation of all collegiate and conference championships. Norrman won an eye-popping five tournaments that season, finishing in the Top 10 of all seven events played, to end the year ranked the No. 1 NCAA Division II individual according to the Golfstat computer rankings. His Golfstat adjusted scoring average of 69.25 was the lowest across all divisions of the NCAA.

Norrman’s 69.10 stroke average in 2019-20 was the lowest ever posted by any Peach Belt Conference player. His low round of that season was an 8-under 64 at the Nova Southeastern University Shark Invitational, Oct. 7-8, on the PGA National Champions Course in Palm Beach Gardens, Fla. He shot par or better in 19 of the 20 rounds played. His best 36-hole score was 135 (7-under) and his best 54-hole showing was a 204 (12-under).

A 10-time Peach Belt Conference Golfer of the Week, Norrman was a two-time NCAA Division II All-Region and PING All-America selection. He led Georgia Southwestern to its first-ever Golfstat team ranking of No. 1 in October of 2019 and the Hurricanes did not relinquish the top spot that season. Norrman been selected to play in the 2020 Arnold Palmer Cup where he was one of the 12 men’s collegiate players selected for the international team and the only NCAA Division II player on the men’s side. He was the first Peach Belt Conference golfer to ever be selected for the Arnold Palmer Cup.

Norrman was part of the Swedish team that won the 2019 European Amateur Team Championship. Norrman was selected to represent Sweden at the 2019 Spirit International Amateur Golf Championship played in November.

He transferred to Florida State University for a fifth-year senior season (2020-21) and rose to as high as No. 4 in the World Amateur Golf Ranking. Norrman played his way through First, Second, and Final Stage of the Korn Ferry Tour Qualifying Tournament last fall, then recorded a pair of podium finishes as a rookie this season and held on for his first PGA Tour card with a T31 in the regular season finale. He’ll be one of 16 rookies on the PGA Tour in 2022-23 when the season tees off on Sept. 15.