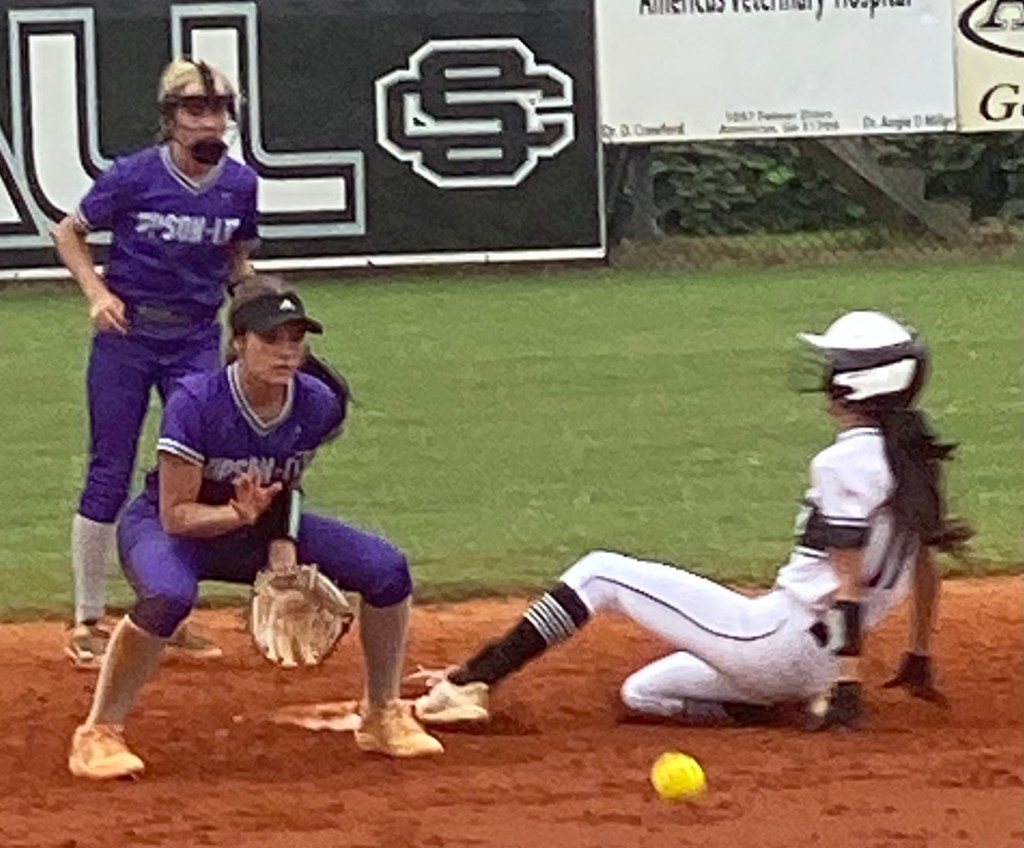 Schley County centerfielder Brenna Jacobs is seen here stealing second base against Upson-Lee. Jacobs went 2 for 3 at the plate with two RBIs and two runs scored. One of those RBIs came in the bottom of the sixth inning when she drove in an RBI single to help lead the Lady Wildcats to victory. Photo by Ken Gustafson

ELLAVILLE – Thanks to both an RBI single by Brenna Jacobs and a two-run double by Makenna Wurtz in the bottom of the sixth inning, the Schley County Lady Wildcats (4-3) were able to add three insurance runs and snapped a two-game losing streak with an 8-4 victory over Upson-Lee (ULHS) on Wednesday, August 24 at Wildcat Park.

Jacobs’ RBI single was the second of her two hits on the day, as she went 2 for 3 at the plate with two RBIs and two runs scored. For Wurtz, her sixth inning two-run double was her only hit of the day, but it came at a crucial time, as the Lady Wildcats only led 5-4 before she came through with those two RBIs.

“I thought we played pretty well. We had a few big errors that led to runs and it made the game a little closer than it should have been,” SCHS Head Coach Jody Sellars said. “We’ve got to clean up defense. My girls know that we’ve got to pitch and play defense. We don’t usually fair well if we don’t. Fortunately, we swung the bats well enough down the stretch to make up for the errors…some big hits.” 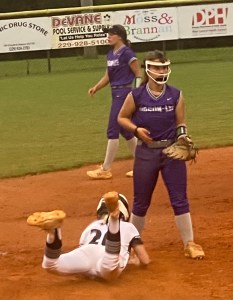 Schley County second baseman Makena Wurtz dives back to third base safely. Wurtz drove in two runs in the bottom of the sixth on an RBI double to help lead SCHS to victory.
Photo by Ken Gustafson

Sellars went on to recognize Abbie Cheek for her key single in the bottom of the sixth that went off the left field fence. At the time, Cheek’s hit put runners at first and second with nobody out before Emma Walker and Cheek stole third and second base respectively, which paved the way for Jacobs’ RBI single to make it 6-4 in favor of SCHS. It was Cheek’s only hit of the day, but it came at an important time. Sellars also singled out Wurtz for her two-run double down the left field line in the sixth that gave the Lady Wildcats the two insurance runs needed for their 8-4 victory.

“It’s nice to see us come through and have some offensive success because we’ve been struggling at the plate a little bit lately,” Sellars said. “Hopefully, it kind of kick starts us and get’s our offense rolling for a little bit.” 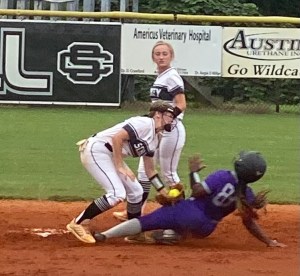 Schley County shortstop Destiny LeCroy tags out a runner at second base. LeCroy went 2 for 4 at the plate with an RBI in the Lady Wildcats’ victory over Upson-Lee.
Photo by Ken Gustafson

In addition to the hitting performances of Wurtz, Jacobs and Cheek, Destiny LeCroy turned in another solid performance at the plate for SCHS. LeCroy went 2 for 4 with two singles and an RBI. Both Emma Walker and Zoe Molina each had a hit in the game. Walker went 1 for 2 with an RBI and scored two runs, while Molina went 1 for 4.

The ULHS Lady Knights got on the scoreboard first in the top of the second inning with two runs on two hits and took advantage of an SCHS error, but the Lady Wildcats countered with two runs in the bottom of the second by taking advantage of two walks and a wild pitch. Kalli Bishop drew a walk to lead things off and Molina singled to put runners at first and second with nobody out. Emma Walker then drove in a run on a fielder’s choice and pinch runner Jaelyn Wynn scored on a wild pitch to tie the game at 2-2.

The Lady Wildcats then took a 5-3 lead in the bottom of the fourth by scoring two runs on a hit and took advantage of two walks. Lizzie Barineau drove in Emma Walker on a fielder’s choice and Jacobs drove in Abbie Cheek on an RBI bunt single.

The Lady Knights responded in the top of the fifth with a run on an RBI double by Watson, but the Lady Wildcats responded with the three insurance runs from the RBI hits by Jacobs and Wurtz in the bottom of the sixth inning. 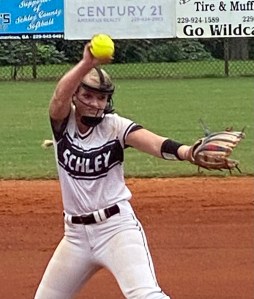 Lizzie Barineau, who went the whole way as the starting pitcher for SCHS, retired in order the three Lady Knights she faced in the top of the seventh to secure the victory for the Lady Wildcats. In total, Barineau gave up four runs on eight hits, walked three and struck out three in seven innings of work.

Ellie Watson and Taylor Snipes each went 2 for 4 at the plate to lead the Lady Knights’ offense. With the loss, ULHS drops to 1-7 on the season.

The Lady Wildcats (4-3) were supposed to host Macon County on Thursday, August 25, but that game has been postponed due to rain and will be played on September 20. SCHS will host Bryan County in a doubleheader on Saturday, August 27. Game 1 is scheduled to start at 12 p.m., followed by Game 2 at 2 p.m.