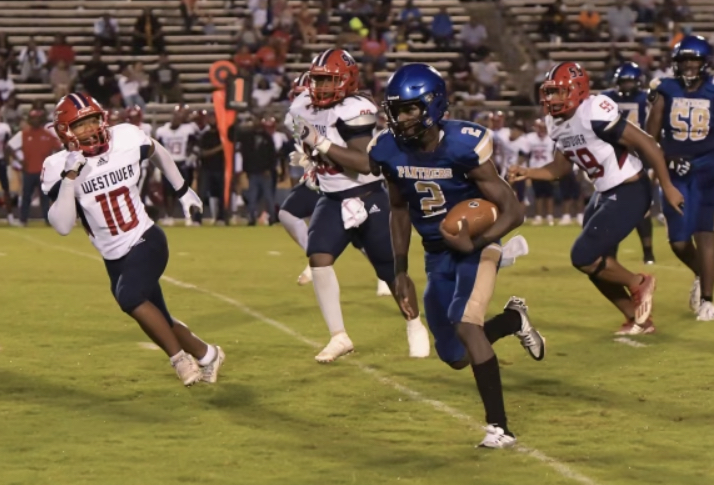 AMERICUS – Having flushed the disappointing loss to Houston County out of their system, the Sumter County Panthers (SCHS) bounced back and gave first year Head Coach Clifford Fedd his first victory as the SCHS skipper: a 26-21 victory over Westover (WHS) on Friday, August 26 at Alton Shell Stadium.

The game was delayed for about 30 to 45 minutes due to lightning in the area, but the Panthers were able to catch lightning in the first half. Though things got difficult for SCHS in the third quarter and late in the game, they were able to pull together and withstood a late rally by the Patriots to earn the victory.

After the game, Coach Fedd told his team that he was proud of them for earning the victory, but reminded them that there is still much work to be done and things to clean up if the Panthers want to be a playoff team at the end of the regular season.

“We want to play together as a team. We want to battle as a team. We want to continue to work as a team. We’ve got to do stuff together and be positive about the things that we do,” Coach Fedd said. “Right about the third quarter, things weren’t going our way. We had a couple of things go against us. We didn’t do our jobs and then Westover started getting back in the game. Instead of pointing the finger, instead of crying and fussing and quitting, our young men battled back and they stopped the bleeding. We were able to come out and be victorious with a 26-21 victory against a good Westover team,” Fedd continued. 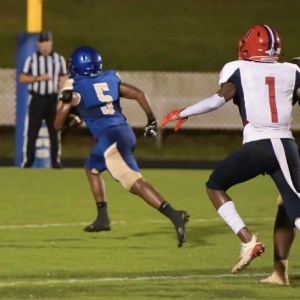 Sumter County running back D.J. Hurley (#5) is seen here breaking towards the end zone. Hurley scored a rushing touchdown from a yard out to give the Panthers a 13-2 lead with 11:45 to go before halftime.
Photo by James Cochran II

However, the SCHS defense fought back and made a big play when they forced a fumble. Defensive Tackle Bryan Williams recovered the ball and scored a touchdown. The extra point by Jose Diaz was good and SCHS led 7-2 with 3:49 left in the first quarter.

With 11:45 to go before halftime, the Panthers added to their lead when running back D.J. Hurley scored from one yard out. Diaz’s extra point attempt was blocked, but the Panthers had a 13-2 lead.

However, on the next SCHS possession, Evans fumbled the football and it was recovered by WHS at the SCHS 30-yard line. The Patriots were able to capitalize on the turnover, as they were able to move the ball all the way down to the SCHS three-yard line. Then running back Aiden Griffin scored from three yards out. The extra point was blocked by Panthers’ Corderian Leverett, but WHS had cut the SCHS lead to 13-8 with 4:26 to go before halftime.

However, as halftime approached, SCHS would fire the final salvo of the first half. The Panthers were able to move the ball down to the WHS 19-yard line. Then with 45 seconds left, Evans found Brandon Pope in the end zone for a 19-yard touchdown reception. The Panthers tried to go for two, but Pope dropped the two-point try. Nevertheless, SCHS had a 19-8 halftime lead.

With 7:48 to go in the third quarter, the Patriots scored the first touchdown of the second half. The extra point was good and the SCHS lead was trimmed to 19-15.

However, the Panthers responded, as Evans was able to find Pope in the end zone for a 25-yard touchdown reception with 19 seconds left in the third quarter. The extra point by Diaz was good and SCHS led 26-15. 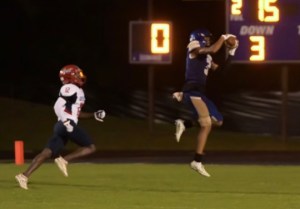 With a little over five minutes left in the game, the Panthers had the ball and were trying to use their ball-controlled offense to run the clock down. However, on third down, running back D.J. Hurley was denied first down yardage and the Panthers were forced to punt the ball back to the Patriots.

WHS was able to move the ball down into SCHS territory. Then quarterback Keyon Thomas threw a pass into the end zone to a receiver, but the Panthers were flagged for pass interference on the play. A few plays later with less than a minute left, Thomas scored on a quarterback keeper. The extra point was no good, but the Patriots were within five at 26-21 with the onside kick upcoming.

Fortunately for the Panthers, they were able to recover the onside kick and went on to claim the 26-21 victory over WHS.