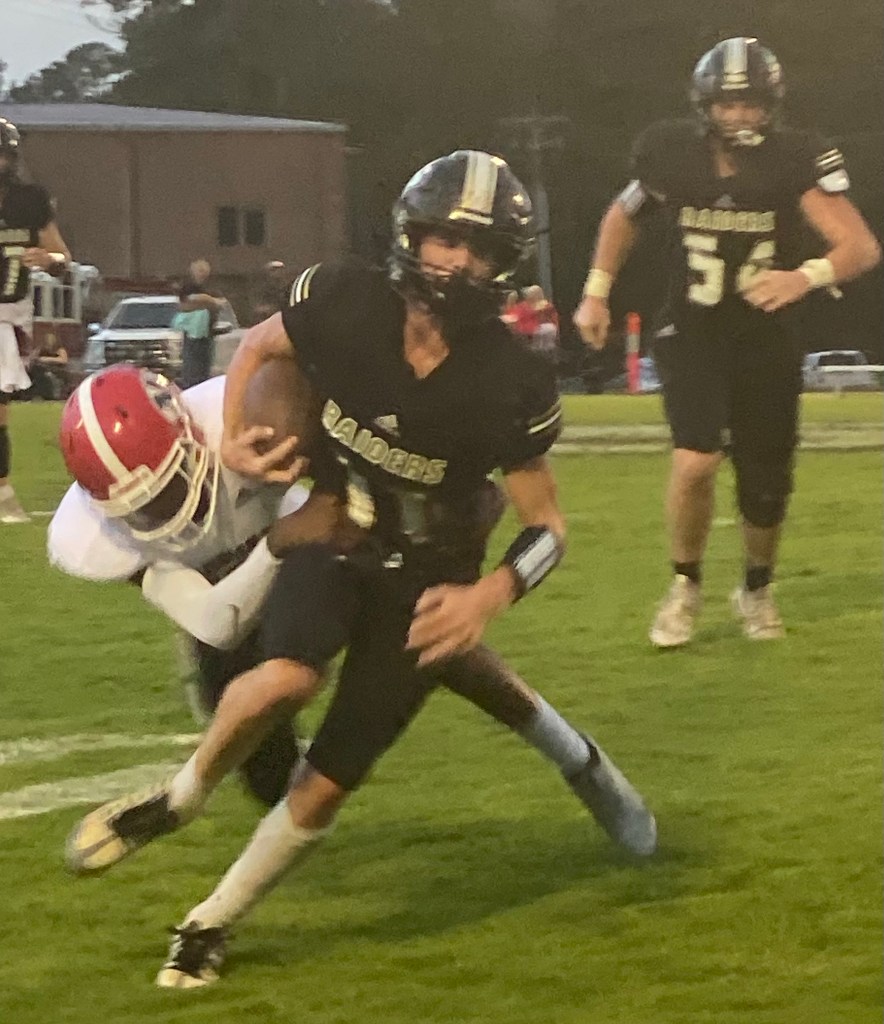 Southland Academy running back Trey Sellers is seen here fighting for yardage against Marion County. Sellers made several big plays in the running game and made some key receptions, including a touchdown reception with 10.8 seconds left before halftime. Photo by Ken Gustafson

AMERICUS – Having defeated Taylor County 21-20 in their first game of the season a week ago, the Southland Academy Football Team (SAR) set its sites on toppling another GHSA Class A-Public opponent, the Eagles of Marion County (MC), on Friday, August 26 at Harvey Simpson Stadium. Thanks to some big plays on both sides of the ball, the Raiders were able to do just that. They were able to make big plays in the running and passing game on offense and they forced three turnovers on defense. As a result, SAR earned its second straight victory over a GHSA opponent with a 21-14 victory over the Eagles and posted a 2-0 start to the 2022 season.

“Our kids played extremely hard and they played with a lot of desire,” SAR Head Coach Rod Murray said. “We have some things to work on, but we are thankful for our win tonight. Our kids are competing as one solid group that has embraced their roles. We are still building depth and that helped us tonight by playing a lot of players. Our coaches did a great job. It’s those guys getting them ready. Southland Raider heart was shown tonight by everyone.” 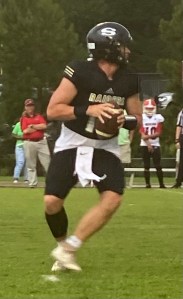 Southland Academy quarterback Chase Ledger threw two touchdown passes and ran for another to lead the Raiders to a 21-14 victory over Marion County.
Photo by Ken Gustafson

MC got the ball first to start the game, but could not sustain a drive thanks to the SAR defense. Will Godwin was able to come up with a sack of MC quarterback Ty Goodroe and it nullified the Eagles’ first drive on offense.

However, the Raider offense struggled on its first possession, as quarterback Chase Ledger was sacked by Sankeevious Holloman to nullify the Raiders’ drive.

For much of the first quarter, neither offense could get things going, partly because of the strong defensive play of both teams and partly due to penalties, particularly against MC. It wasn’t until the waning seconds of the first quarter that the Raiders were able to mount a drive deep into MC territory. With the ball at their own five-yard line, SAR got a boost on offense when running back Trey Sellers broke through the Eagles’ defensive line and scampered 52 yards down to the MC 43-yard line. Then in the early stages of the second quarter, the Raiders were able to move the ball down into the Eagles’ territory. Then on third down and nine from the MC 29, Ledger completed a 17-yard pass to Perry Usher near the MC 12-yard line. This put SAR in business, but the drive stalled and the Raiders were forced to attempt a 29-yard field goal. However, the FG attempt by Henry Johnson was no good and the score still remained 0-0. 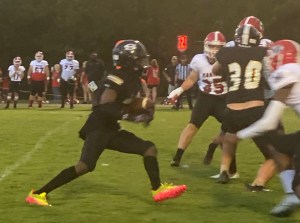 Southland Academy running back Cedric Smith made some big plays in the running game and caught some key passes as a receiver in the Raiders’ 21-14 victory over Marion County.
Photo by Ken Gustafson

On the Eagles’ ensuing drive from their own 20-yard line, MC running back Kamron King fumbled the ball and it was recovered by the Raiders. This gave SAR a second chance on offense and they took advantage of it when Ledger found Usher in the end zone for a four-yard touchdown pass. Johnson’s extra point was good and the Raiders led MC 7-0 early in the second quarter.

The Raider defense came up big again on MC’s next drive on offense, as they were able to recover another MC fumble. However, the SAR drive stalled and the Raiders were forced to punt.

On MC’s next possession, the Eagles had the ball down near their own 10-yard line before Goodroe completed a pass to Kelby Tymes near midfield for first down yardage. Goodroe then completed a pass to Ian Williams and he followed that up with another big passing play to Tymes that resulted in a 35-yard gain down to the SAR 28. A couple of plays later, Tymes rumbled his way down to the SAR 13-yard line and the Eagles were poised to finish the drive with a touchdown. 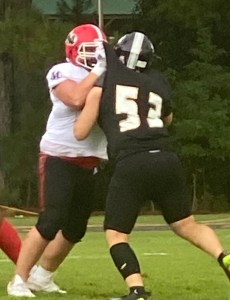 However, on third and five from the SAR eight-yard line, illegal procedure was called against the Eagles, making it third down and 10 from the 13. But that didn’t stop MC on this drive as Goodroe gained first down yardage on a quarterback keeper down to the SAR two-yard line. After a timeout by the Eagles, quarterback Jayden Richardson scored on a quarterback keeper. The extra point was good and the teams were tied at 7-7 with 32.9 seconds remaining before halftime.

The Raiders, however, weren’t going to wait until the second half to try and score. On their first play from scrimmage, Ledger completed a pass to Cedric Smith, who ran the ball all the way down to the MC 36-yard line. This prompted MC to call a timeout with 21.3 seconds left. Out of the timeout, the Raiders were flagged for a false start penalty. Then on first and 15 from the MC 41, Ledger found Sellers over the middle for a 26-yard reception at the MC 15. After Ledger spiked the ball with 10.8 seconds left, he completed a touchdown pass to Sellers. The Raiders tried for the two-point conversion, but were flagged for illegal procedure. SAR decided to go ahead with the extra point from Johnson and it was good, giving SAR a 14-7 lead at the half. 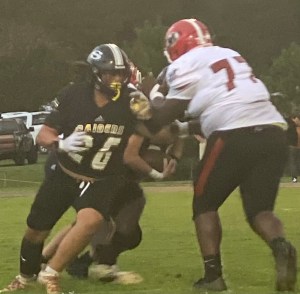 The Raiders got the ball to start the second half, but the Eagles forced a fumble and recovered the ball inside the SAR 30-yard line. A few plays later, MC capitalized on the turnover when Goodroe completed a 19-yard touchdown pass to Jayden Richardson. The extra point was good and the score was tied at 14-14 with about 10 minutes left in the third quarter.

On the Raiders’ next possession, they were able to move the ball to their own 36-yard line, but on third and three, Ledger was able to pick up the first down on a quarterback sneak. This was a big play because a few plays later, Ledger found Cedric Smith for a reception down to the MC 27-yard line. On the next play from scrimmage, Ledger ran a quarterback keeper for 14 yards down to the Eagles’ 13. Then on first and 10 from the MC 13, Ledger completed another pass to Smith for no gain, but two plays later, Ledger scored on a quarterback keeper from five yards out. Johnson’s extra point was good and SAR was back on top 21-14 with 5:10 left in the third quarter.

However, the Eagles were ready and poised to strike back. They got a big kickoff return to midfield from Myles Jorden-King, but a penalty pushed them back to their own 36-yard line. The Raiders were able to hold the Eagles on this drive and they were forced to punt. 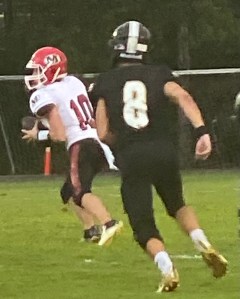 SAR was not able to mount a scoring drive on its next possession, but the defense came through again, as defensive back Fisher Britt intercepted Goodroe’s pass, putting the SAR offense in business inside MC territory.

On SAR’s first play from scrimmage, Ledger found Perry Usher for a reception down near the goal line, but an ineligible receiver penalty was called against the Raiders, which moved them back to the MC 24.

On third and 10 from the MC 24, Ledger tried to complete a pass to Usher, but it was intercepted by Myles Jorden-King. As the third quarter drew to a close, the defenses of both teams had forced a turnover and there were only 12 minutes left to decide a winner in this hard-fought contest.

With a little over seven minutes left in the game, the Raiders had the ball on third and 10 at their own 35 before Cedric Smith broke free for another big gain into MC territory.

A few plays later on third down and four from the MC 34, Sellers carried the ball for first down yardage to the Eagles’ 30. Two plays later, Smith got the first down at the MC 21 and the Raiders were just outside the red zone.

On MC’s first play from scrimmage, Goodroe threw a screen pass to Tymes that was good for first down yardage near midfield, but on the next two plays, the Eagles came up empty as Goodroe threw two incomplete passes. Then on fourth down and 10 from the 50, Goodroe’s pass intended for Kameron King was knocked away by Banks Simmons. At that point, the Raiders took over on downs and were able to run out the clock and salt away their 21-14 victory.