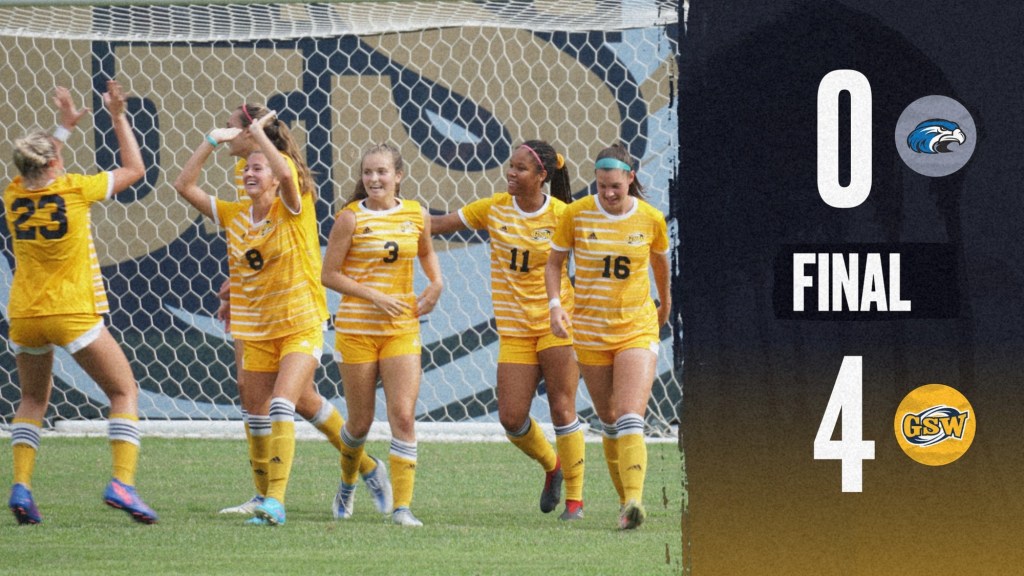 GSW Women soccer players Emily Davis (#23), Emma Carter (#8), Lucia Bustamante (#3), Krystal Elie (#11) and Lauren Ford (#16) celebrate after one of their goals scored. The Lady Hurricanes are now 2-0 on the season after wins over Albany State and Shorter University. Photo by GSW Athletics

AMERICUS – The Georgia Southwestern State University Women’s Soccer Team (GSW) is off to a 2-0 start to the 2022 season with a 3-1 victory over Albany State and a 4-0 clean sheet (shutout) victory over Shorter University.

The Lady Rams were able to get the equalizer when GSW was whistled for a foul inside the 18-yard box, which warranted a penalty kick for ASU. Kaleema Alexis stepped up and converted the PK in the 59th minute to tie the match at 1-1.

However, in the 67th minute of the match, GSW took a 2-1 lead on a goal by Karsen Winget and twelve minutes later in the 85th minute, the Lady Hurricanes put the finishing touches on their 3-1 victory when Marina Thompson scored off an assist from Lucia Bustamante.

Two days later on Saturday, August 27, the Lady Hurricanes followed up their victory over ASU with a 4-0 win over Shorter University in their first home match of the season.

Five minutes into the second half, GSW struck for their third goal when Krystal Elie scored her second goal of the season off an assist from Karsen Winget.

Then in the 66th minute, the Lady Hurricanes put the finishing touches on a dominating performance when Winget scored the fourth goal of the match off an assist from Teresa Rodriguez.

The Lady Hurricanes (2-0, 0-0 PBC) will try to keep their undefeated streak going when they host Southern Wesleyan University at Hurricane Field on Wednesday, August 31. Kickoff is scheduled for 5 p.m.