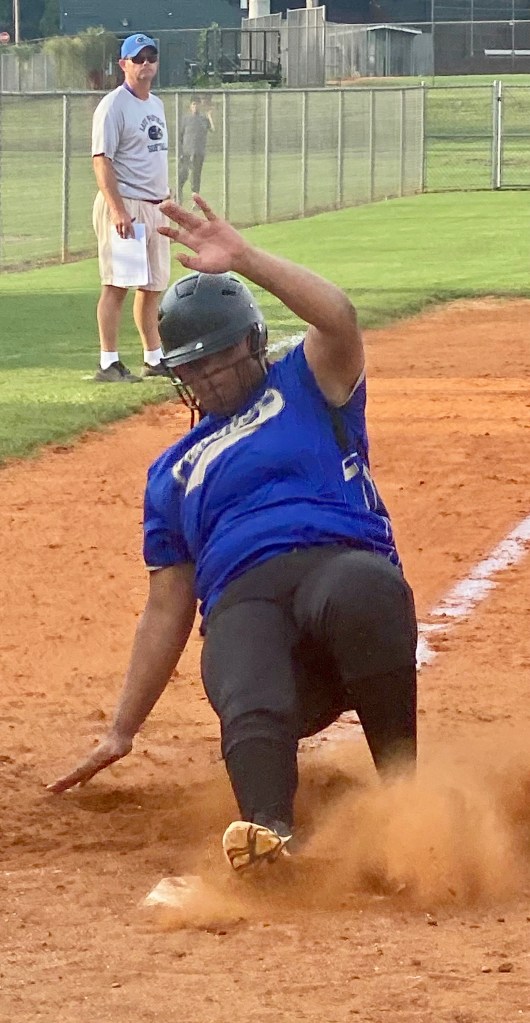 Sumter County’s Eriel Aldridge is seen here sling home safely. Aldridge scored the winning run when she slid into home plate in the bottom of the fifth inning to give the Lady Panthers a 32-31 victory over Monroe, their first victory in five years. Photo by Ken Gustafson

AMERICUS – It has been a long and difficult five years for Head Coach Coleman Price and the Sumter County girls’ softball program (SCHS). Over that duration of time, that Lady Panthers have gone without having tasted a victory, but on Wednesday, September 7, SCHS managed to find a way to earn the program’s first victory since the school was renamed Sumter County High School. Going into the bottom of the fifth inning, the Lady Panthers trailed the Monroe Lady Tornadoes (MNR) 31-26, but they were able to score six runs by taking advantage of six walks, a hit batsman and an error. The winning run came when Eriel Aldridge, who was at third base, broke for home on a wild pitch and collided with the MNR catcher. Aldridge was shaken up on the play, but she was able to get her feet in first before the tag to give the Lady Panthers a 32-31 victory, their first victory in five years.

“It’s good for our girls and our program,” Price said. “They worked hard to win tonight. It didn’t look pretty, but we came through on top in the end. There are a lot of things we’ve got to clean up, so we’re going to let them enjoy the win tonight and get ready tomorrow to play a JV game against Furlow.”

The Lady Panthers will be taking on the Junior Varsity team of Furlow Charter Thursday afternoon at the Sumter County Parks and Recreation complex at 5 p.m. 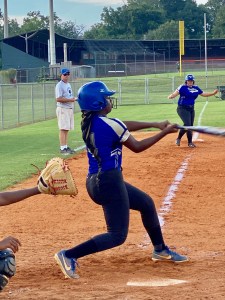 The Lady Tornadoes jumped out to a 4-0 lead in the top of the first inning. Two of those runs were scored on a two-run RBI double from Kamela King. However, the Lady Panthers responded in their half of the inning with an 18-run explosion. Kierra Wilkerson and Madison Shelton each drove in runs on a double and a triple respectively and SCHS was able to take advantage of 10 walks, seven hit batsmen and an error committed by the Lady Tornadoes.

However, MNR responded with a big inning of its own. The Lady Tornadoes scored 11 runs on six hits and they took advantage of four walks and two hit batsmen. As a result, MNR was right back in the game and only trailed 18-15.

In the bottom of the second, the Lady Panthers responded with two more runs on two walks and two hit batsmen, but MNR countered in the top of the third inning with four more runs on five hits to close to within one run at 20-19.

The Lady Panthers responded in the bottom of the third with five runs on two hits and took advantage of two walks, one error and one hit batsmen. The two hits in the frame came off the bats of Eriel and Tamia Aldridge. Eriel drove in two runs on a triple to left field and Tamia drove in a run on an RBI double to center field. By this time, the Lady Panthers had a 25-19 lead.

However, this game did not lack in offensive production and more runs were on the way. In the top of the fourth, the Lady Tornadoes scored 12 runs on seven hits and took advantage of four walks and three hit batsmen committed by SCHS. What was a 25-19 lead for the Lady Panthers was now a 31-25 deficit.

The Lady Panthers managed to score a run in the bottom of the fourth on a passed ball, but fortunately for SCHS, they were able to hold the Lady Tornadoes scoreless in the top of the fifth, which paved the way for what would be an historic comeback in the bottom half of the inning. 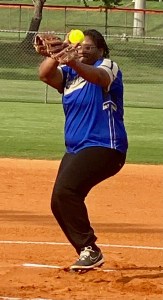 Sumter County pitcher Madison Shelton went the whole way in the circle for the Lady Panthers. Shelton gave up 31 runs on 20 hits and walked 13 batters, but posted five strikeouts in the win over the Lady Tornadoes.
Photo by Ken Gustafson

Johnson then issued a base on balls to Tralisha Williams, which scored the tying run from third. Johnson was able to strike out the next SCHS batter, but while Tamia Aldridge was at the plate, Johnson issued a wild pitch that allowed Eriel Aldridge to score from third. The pitch got past the MNR catcher, but she was able to make the play at the plate a close one. However, Aldridge was able to touch home plate with her feet as she slid in just before the tag to give the Lady Panthers the 32-31 victory. Aldridge was shaken up on the play, but was not seriously injured.

Kierra Wilkerson and Treaszure Shelton both led the Lady Panthers’ offense. They both went 2 for 3 at the plate. Wilkerson drove in three RBIs on a triple in the bottom of the first inning and scored four runs, while Shelton drove in four runs on two hits and scored two runs.

Shelton went the whole way in the circle for the Lady Panthers. She gave up 31 runs on 20 hits and walked 13 batters, but posted five strikeouts on the day as well.

The Lady Panthers will play the Furlow Charter JV team Thursday afternoon at 5 p.m. and will travel to Eastman, GA to take on Dodge County in a doubleheader on Monday, September 12. The first pitch of Game 1 is scheduled for 5 p.m.