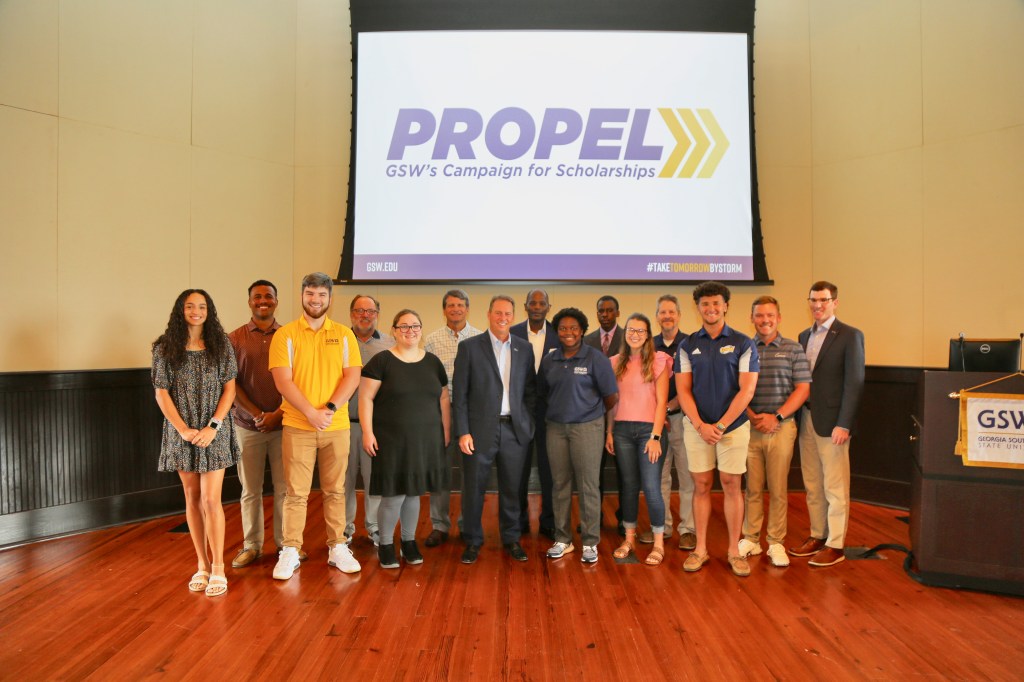 GSW will raise $1 million in scholarship funds. Photo by GSW

AMERICUS – There is a powerful force behind many Georgia Southwestern State University (GSW) students propelling them forward, as over 300 of them receive private scholarship funding from 120 GSW Foundation scholarship funds. Over the next year and a half, GSW plans to add to that total and fulfill current unmet needs by raising $1 million in scholarship funding.

University officials made this formal announcement today during the annual Scholarship “Thank You” Day. This fundraising effort is titled “Propel: GSW’s Campaign for Scholarships.”

“Scholarship opportunities are a major factor when prospective students are considering which college they will attend,” said GSW President Neal Weaver, Ph.D. “Over the next year and a half, we will be raising funds for existing scholarships and establishing new ones. I believe in what a degree from Georgia Southwestern provides, and I am confident that current and potential donors will be prepared to support our efforts.”

Many of the scholarship funds currently in place are named for individuals or families and are designated on specific academic criteria like major and grade point average. Others are more general in nature and can be granted to a larger group of students. For instance, the flexibility of Southwestern Promise fund allows a significant impact to a wider variety of students meeting the academic requirements to receive financial assistance than ever before. The University and its Advancement staff welcome scholarship contributions of any type and would be delighted to establish new funds.

“Having seen the power of scholarship funding in my own life, I am passionate about the story we have to tell in this fundraising process,” said GSW Foundation Executive Director Stephen Snyder. “We will be reaching out to prospective donors in a number of ways over the next 18 months. One of the first opportunities to contribute will be on GSW’s fourth annual Day of Giving on Thursday, September 22.”

The $1 million scholarship funding campaign will conclude at a scholarship gala at the end of January 2024. Between now and then, potential donors, GSW alumni and friends alike, will have many opportunities to contribute – beginning with the Day of Giving on September 22.

For additional information on ways to give, visit gsw.edu/foundation. You can also call (229) 931-2014 or email foundation@gsw.edu.