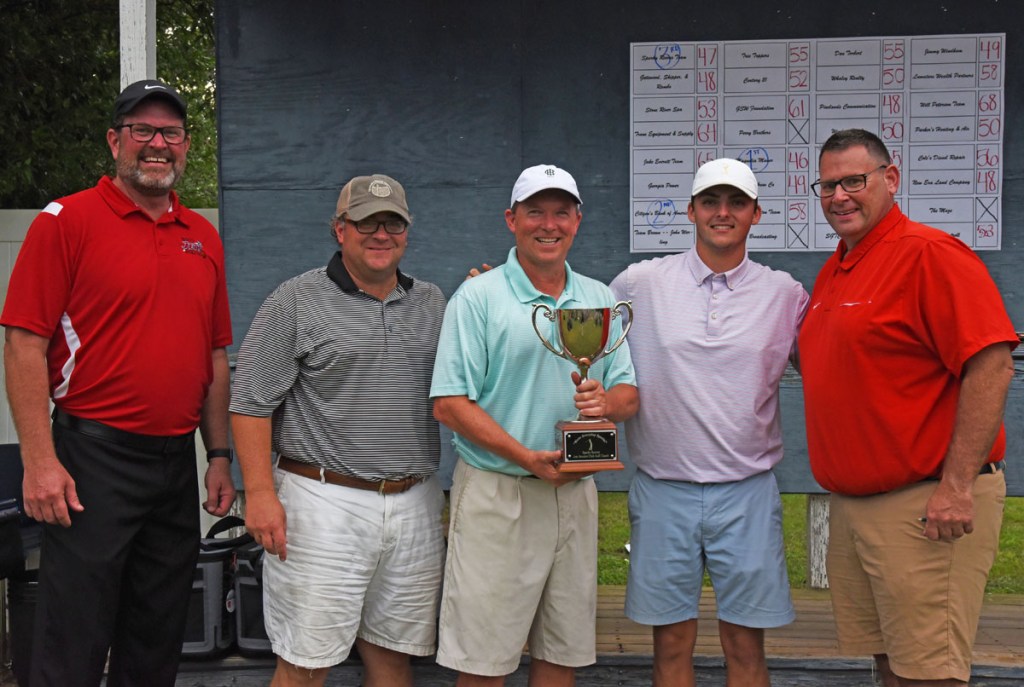 Team Magnolia Manor had a one stroke advantage over the second and third place teams who both finished with a score of 47 on the 18-hole course.  The Citizens Bank Team of George Rockmore, Wade Halstead, and Chad Denham came in second place after the tie-breaker was applied.  The Sparky Reeves team of Kevin and Will Reeves, and Stan Gann finished in third place.

Kevin L. Reeves, son of SGTC President Emeritus Sparky Reeves, kicked off the tournament and thanked everyone for their thoughts and prayers for his dad who could not attend the tournament because of health issues.  “Dad’s doctors advised him not to come out today because of his weakened immune system but on behalf of our family, we thank you for your support today. He is a fighter and wishes he could come out today and support this great cause.”

And even though he was not in attendance, Sparky Reeves reached out to express his own appreciation to everyone for their support of his family during this next chapter in their life’s journey.   “I want to thank all the team and hole sponsors in the SGTC Jets and Lady Jets Booster Club Golf Tournament,” said Sparky Reeves.  “Your support will make a big difference for these teams in the coming year.”

South Georgia Technical College President Dr. John Watford took a few minutes before the tournament began to also “thank everyone for that support of the college and this great tournament.  We all appreciate what Sparky Reeves has done for South Georgia Tech and this community and this is a great way to support and give back to the Jets and Lady Jets basketball teams.”

This was the 8th annual Sparky Reeves Tournament.  The Peterson team of Chandler Studdard, Corey Stallings, and Bray Bishop won the 2021 tournament.  The Synovus team led by Buddy Guth, Jason Evans, and Jodie Hayes won the 2020 tournament and TSG took first place in the 2019 tournament with Brandon Horne, Kory Hobbs and Gatewood Ledbetter.  Georgia Southwestern State University Foundation was the 2018 tournament champion.  Karl Booker and the Harrod Tree team won in 2017 and 2016 and the Hooks Agency was the winner in the inaugural tournament in 2015.

South Georgia Technical College President Emeritus Sparky Reeves said he was humbled by the turnout and the support. I want to thank everyone who had a part in making this tournament a reality this year and for the last seven years.”  He also encouraged everyone to come out and support the Jets and Lady Jets who both wound up in the NJCAA National Tournaments last year.

South Georgia Technical College Athletic Director and Lady Jets head coach James Frey was very pleased with the turnout. “We are so appreciative of the support that we receive from each of you and from the community as a whole,” said Coach Frey.  “This was a great day and I would like to thank Dr. Watford and Sparky Reeves for what they mean to me, our college, our basketball program and this community.  We are very appreciative of them and their service and support.”

Thirty-two teams signed up to participate in the three-person scramble which featured a shotgun start, longest drive, and closest to the pin contest in addition to prizes for the top three teams. Steven Avant, Ryan Landreth, and Jimbo Griffith won the prize for the closest to the pin. Ray Bishop won the longest drive.  Arty Cromer won the Big Screen TV prize, Jeff Barnett won a Lake Package, Buddy Guth won a TCSG back pack and Jimmy Windham captured the 50/50 raffle prize.