Despite effort from SC defense, Panthers fall to Crisp County in “Battle of the Flint” 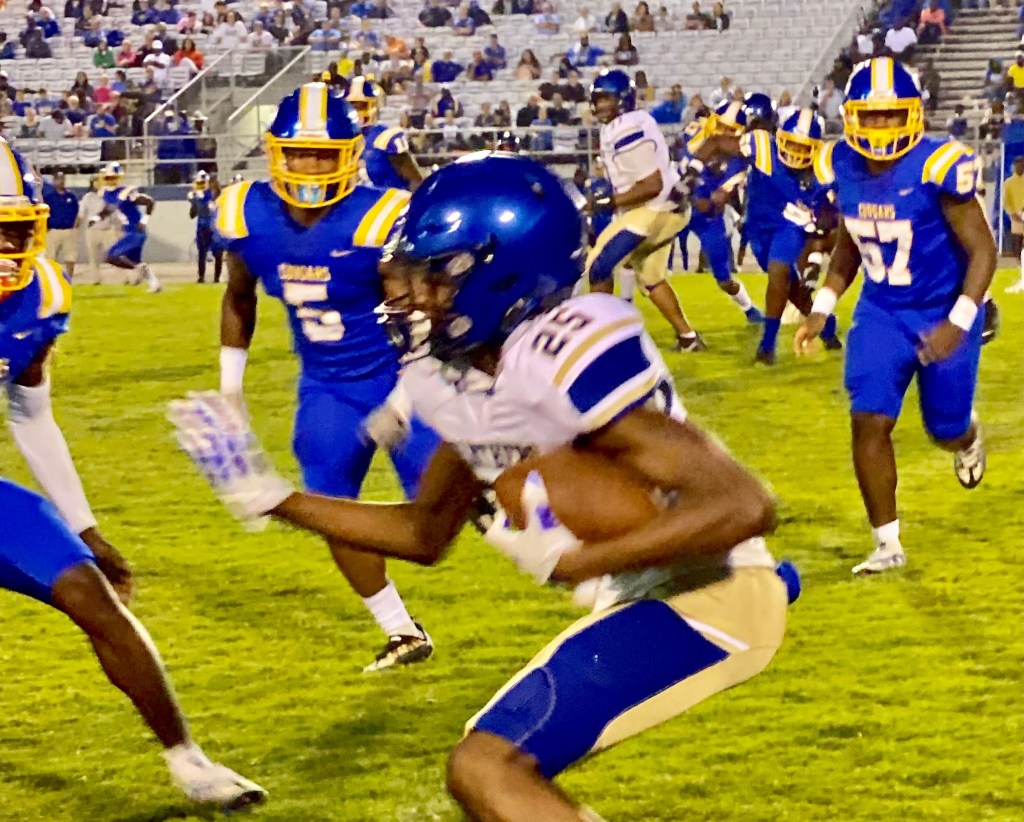 CORDELE – Having had an extra week to prepare for their annual “Battle of the Flint” rivalry against Crisp County (CC), the Sumter County High School Football Team (SC) came into Friday night’s game against the Cougars hoping to take the bragging rights back to the west side of the Flint River and to improve its overall record to 2-1 on the season. Throughout the entire contest, the Panther defense kept SC in the game by getting stops and forcing turnovers, but a struggling SC offense, coupled with miscues on special teams, proved to be the Panthers’ undoing as the Cougars defeated SC 19-0 on Friday, September 9 at the CCHS football stadium.

“We had our chances. All we wanted to do was give ourselves a chance,” SC Head Coach Clifford Fedd said. “We went into halftime 3-0. We’ve just got some things that we have to clean up and fix. We had some punt and special teams situations and offense situations. We just wanted to give ourselves a chance to be in the game at halftime and we were in it. We’ve just got to clean up some things and continue to improve and we will get there.”

The Panthers received the ball to start the game, but were unable to mount a scoring drive and were forced to punt on fourth down. However, the ball was snapped over punter Ary Flores’ head and the ball was recovered by the Cougars at the SC 27-yard line. However, as it had done throughout the game, the SC defense held CC on offense and the Cougars were forced to settle for a 29-yard field goal from David Mitchell and a 3-0 lead. 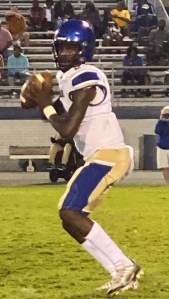 Sumter County quarterback Cameron Evans is back to pass against Crisp County.
Photo by Ken Gustafson

SC struggled once again on its next offensive possession and was forced to punt. However, Flores mishandled the snap and the Cougars recovered the ball deep into SC territory. However, the Panther defense rose up again and forced another field attempt by Mitchell. Fortunately for the Panthers, Mitchell’s 44-yard field goal attempt was no good and the score remained 3-0 late n the first quarter.

The Panthers tried to get their offense going in the remaining minutes of the first half, but quarterback Cameron Evans threw an interception that nullified the drive. Nevertheless, the SC defense showed up once again on the Cougars’ ensuing drive and forced CC to punt.

On the Panthers’ next to last possession of the first half, they tried to use the running attack of running back D.J. Hurley and the scrambling of Evans to gain yardage. However, the drive bogged down and SC was forced to punt once again.

Special Teams problems continued to haunt the Panthers, as Flores’s punt was blocked and the Cougars’ Omarion Young scooped up the ball and ran it all the way down to about the three-yard line. On the next play from scrimmage, CC quarterback Ahmad Brown scrambled to his right and scored on a quarterback keeper, but the play was nullified due to a holding penalty on the Cougars. CC tried two more times to score, but failed. Then on fourth and goal, Brown tried to score on a quarterback keeper, but he was sacked in the backfield by SC outside linebacker Aaron Kearse. Having kept the Panthers in the game the entire first half, the SC defense capped off a brilliant first half performance with a goal line stand. In spite of the problems on special teams and the struggling SC offense, the Panthers were still very much alive at halftime, as they only trailed the Cougars 3-0.

On their first possession of the third quarter, the Panthers were able to use the running attack of Hurley to move the ball down to the CC 44, but on first and 10 from the 44, Evans’ pass was picked off by CC defensive back Zymorian Jackson. Then on their first play from scrimmage, the Cougars got a big gain when wide receiver Trae Walker ran the ball down the sidelines all the way close to the SC 10-yard line. However, on the next play from scrimmage, the Panther defense rose up again. They forced a fumble and the ball was recovered by SC cornerback Keaston Taylor. Once again, the SC defense had come up with another big play to keep the Panthers in the game and once again, they had thwarted the CC offense.

However, on the Cougars’ next possession, they were able to move the ball down inside the SC 10-yard line and would eventually add to their lead when running back Semaj Chatfield scored from four yards out. The extra point by Mitchell was good and the Panthers trailed 10-0 midway through the third quarter.

The SC offense was unable to mount a drive on its next possession and was forced to punt the ball back to the Cougars. CC was able to take advantage by moving the ball down inside the SC 20. The Panther defense once again forced a fourth down situation, but running back A.J. Brown was able to run the ball down to the SC four-yard line for a first down. Two plays later on second and goal from the three, Cha tfield scored his second touchdown of the night. Mitchell’s extra point was good and the Panthers, who had been within striking distance up to this point, found themselves trailing their archrivals 17-0 with a little over 11 minutes left in the game.

SC tried to respond on offense, but the CC defense added to the Cougars’ lead by forcing a safety. However, on SC’s ensuing kickoff to the Cougars, the Panthers forced another turnover on a fumble and Kavon Lewis recovered the ball near the SC 20-yard line. However, the Panthers were not able to mount a successful drive, as Evans’ pass attempt on fourth down and nine fell incomplete, giving the ball back to the Cougars at the SC 34.

The CC offense was able to run some clock, but did not mount a scoring drive and punted the ball back to the Panthers. On the ensuing SC possession, the offense came to life as Evans scampered 31 yards on a quarterback keeper. Evans would later complete a pass to Brandon Pope at the CC 11-yard line and with 3:57 left to play, SC had the ball inside the red zone with a chance to score a touchdown. However, the Cougars stopped SC on all four downs and would go on to defeat the Panthers 19-0.

SC (1-2) will try to rebound from this setback and get themselves back into the win column when they travel up to Columbus on Thursday, September 15 to take on Northside-Columbus. Kickoff is scheduled for 7 p.m.