Panthers unable to stop running game in loss to Northside-Columbus 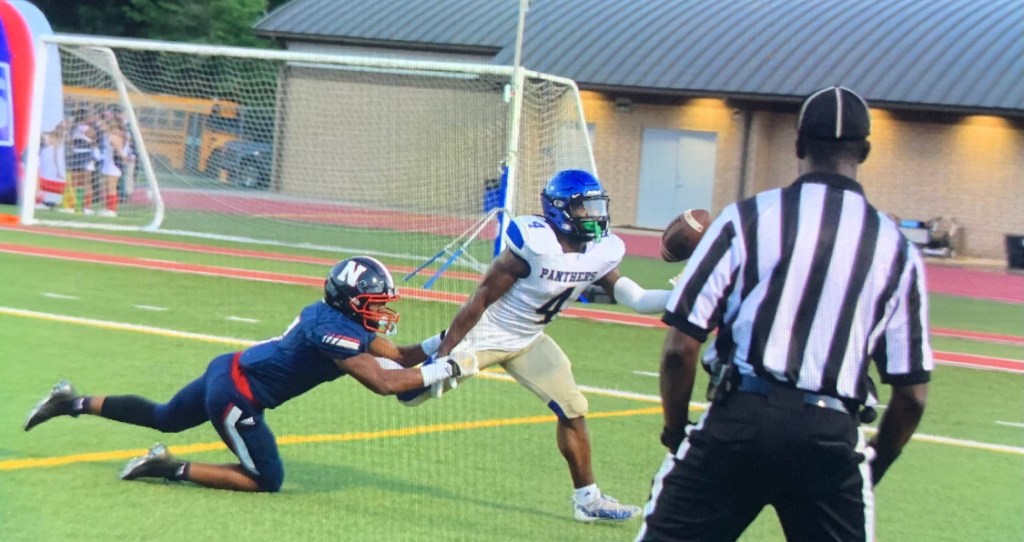 COLUMBUS – The Sumter County Panthers (1-3) struggled to stop the running attack of the Northside-Columbus Patriots (NHS), more specifically the running attack of NHS senior running back Malachi Hosley, one of the top running backs in the state. Hosley torched the SCHS defense with three rushing touchdowns and one touchdown reception and led the Patriots to a 48-27 victory over the Panthers on Thursday evening, September 15 at Kinnett Stadium in Columbus.

While SCHS Head Coach Clifford Fedd respects the ability of Hosley as a running back, he was disappointed with his team’s inability to tackle in this contest, among other things.

“We did a lot of things wrong,” Fedd said. “We did some things. We didn’t play our normal kind of ball tonight. I’m pleased with the effort, but not pleased with doing our jobs, doing our assignments and doing our duties. I’m not pleased with that. We missed a lot of tackles. That (Hosley) is a good running back, but we made him look better than what he is. He is a good running back and it’s a good team, but we’ve got to be able to tackle him better and get him on the ground.”

The Patriots (4-1) got on the board with 1:38 left in the first quarter by orchestrating a drive using the running attack of Hosley. He eventually capped off the drive with a one-yard rushing touchdown. The extra point was good and the Panthers trailed 7-0 late in the first quarter.

NHS added to its lead later in the first half when quarterback Caden Clay completed a slant pass to Hosley, who ran 38 yards for his second touchdown of the night. The Patriots decided to go for two, but Hosley’s pass into the end zone was incomplete. Nevertheless, the Panthers trailed 13-0 midway through the first half.

However, SCHS was able to mount a drive late in the half that ended in points. The Panthers were able to move the ball into NHS territory and quarterback Cameron Evans threw a pass into the end zone to Anthony Tyson, who made a spectacular one-handed catch. The extra point by Jose Diaz-Perez was good and SCHS trailed 13-7.

However, with just a few seconds before the end of the first half, Clay threw a long pass into the end zone that was caught by Devon Scott. The extra point was good and the Panthers went into the locker room at halftime trailing 20-7.

On the Patriots’ next possession, they added to their lead when Scott scored his second touchdown of the night. The extra point was good and the Panthers found themselves in a deep hole, trailing 34-7.

However, SCHS found a way to mount another scoring drive. The Panthers were able to move the ball down inside the NHS 20-yard line before Evans found Tyson in the end zone for his second touchdown reception. The kick by Diaz-Lopez was good and the score was 34-14 in favor of NHS.

On the Patriots’ next possession, however, they had the ball at their own 45 before Hosley broke one for 46 yards down to the SCHS nine-yard line. Then on first and goal from the nine, Hosely scored his fourth touchdown of the night. The extra point was good and the Panthers trailed 41-14 with a little over nine minutes left to play in the game.

In spite of being down by four touchdowns and time running out, the Panthers did not quit. They marched down the field into NHS territory and Evans was able to score on a quarterback keeper from about 30 yards out. However, the touchdown was nullified due to a holding penalty on SCHS. Nevertheless, they were able to move the ball down to the NHS 14 before Evans and Tyson hooked up again for the third time on the night. Evans threw a 14-yard touchdown pass to Tyson in the corner of the end zone. The extra point by Diaz-Perez was good and SCHS trailed 41-21 with five minutes left.

However, whatever joy from Tyson’s third touchdown reception remained, it was snuffed out when Drae Davis ran the ensuing kickoff 92 yards for an NHS touchdown. The extra point was good and the Patriots had a 48-21 lead over the Panthers with a little over four minutes to play.

Once again, however, the Panthers were able to move the ball on their next possession. They moved the ball down to the NHS 35-yard line and would later reach the 25-yard line on a screen pass from Evans to Brandon Pope. A couple of plays later on third and two from the NHS 17, Evans scrambled down to the four yard line and then scored on the very next play on a quarterback keeper. The extra point by Diaz-Perez was no good, but the Panthers would leave Kinnett Stadium with a measure of success, even though they fell to the Patriots 48-27 on Homecoming Night for NHS.

The Panthers (1-3) will be off next week, but will try to get themselves back into the win column when they travel down to Adel, GA on Friday, September 30 to take on the Cook Hornets in their first Region 1-AA game of the season. Kickoff is scheduled for 7:30 p.m.