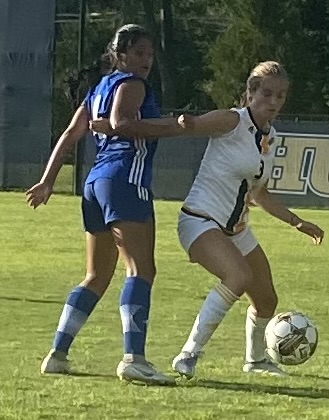 GSW Freshman Midfielder Lucia Bustamante scored the Lady Hurricanes’ only goal of the match in the 59th minute in GSW’s 1-1 draw with Dalton State. ATR Archive

AMERICUS – The Georgia Southwestern State University Women’s Soccer Team (GSW) took a 1-0 lead in the 59th minute of its match against Dalton State on a goal from Lucia Bustamante, but the Lady Hurricanes were not able to hold on to the lead. With just six minutes remaining in the match, DSC’s Guadalupe Martinez gave the Lady Roadrunners the equalizer and both teams would end the match in a 1-1 draw on Tuesday, September 20 at Hurricane Field.

The Lady Hurricanes are now 4-3-2 overall on the season and will return to Peach Belt Conference play when they host Lander University on Saturday, September 24 at 5 p.m.