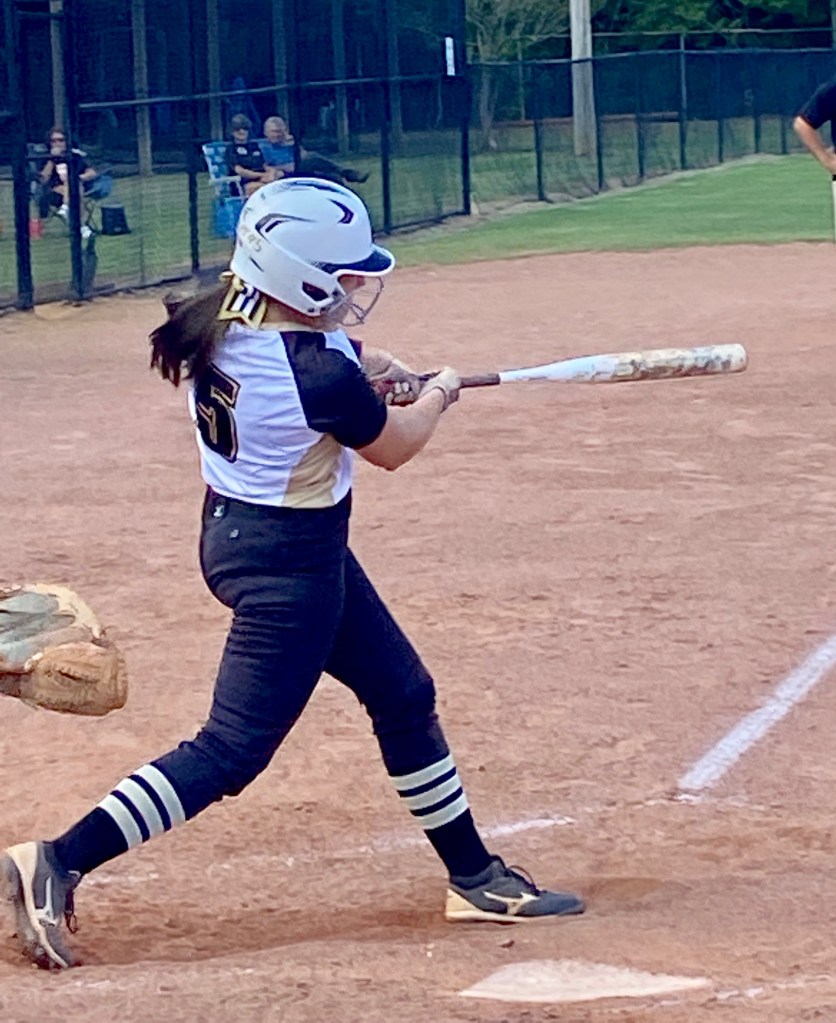 Southland Academy shortstop Morgan Weaver went 2 for 4 at the plate and scored three runs to help lead the Lady Raiders to a 13-5 victory over Brookwood. ATR Archive

AMERICUS – After their 12-4 defeat at the hands of First Presbyterian Day School on Monday, September 19, the Southland Academy Girls’ Softball Team (SAR) bounced back the following day against the Lady Warriors of Brookwood (BRKW). Trailing 4-3 in the bottom of the fifth, the Lady Raiders exploded for seven runs by taking advantage of five walks, two errors and an RBI single by Alyssa Godwin. This seven-run barrage would eventually lead to a 13-5 victory for the Lady Raiders at the Southland Academy Softball Complex.

In the top of the sixth inning, the Lady Warriors scored one run, but SAR added three more runs on RBI singles from Godwin and Ila Johnson in the bottom of the sixth to secure their 13-5 victory.

Morgan Weaver led the Lady Raiders’ attack by going 2 for 4 at the plate with a double and a triple, while Alyssa Godwin went 2 for 5 with three RBIs and a run scored.

Both teams struggled defensively, as the Lady Raiders committed four errors. However, they were able to take advantage of six errors committed by the Lady Warriors.

Johnson started the game in the circle for SAR. In six innings of work, she gave up five runs on nine hits, walked one batter and struck out three.

BRKW jumped out to a 3-0 lead in the top of the first on four hits and took advantage of two SAR errors. However, the Lady Raiders responded with a run in the bottom of the inning. Weaver led off with a triple and would later score on an error. The Lady Warriors added a run in the top of the second inning on an RBI double by Kendall Boggs, but SAR responded with two runs in the bottom of the third. Gracie Wilson led off with a walk and Weaver doubled to left field, advancing Wilson to third. Wilson would later score on a wild pitch and Weaver ended up scoring when Godwin grounded into a fielder’s choice. At this point, the Lady Raiders trailed 4-3 before their seven-run explosion in the bottom of the fifth.

Libby Jacobson led the BRKW offense by going 3 for 4 at the plate with two runs scored and Boggs ended up being the losing pitcher. In a little over four innings of work, she gave up 10 runs on five hits and walked eight SAR batters.

With the win, the Lady Raiders improve to 3-9 on the season and are now 2-3 in GIAA Region 3-AAA competition.

SAR will try to build on this victory when they travel down to Camilla, GA to take on Westwood on Thursday, September 22. First pitch is scheduled for 4:30 p.m.