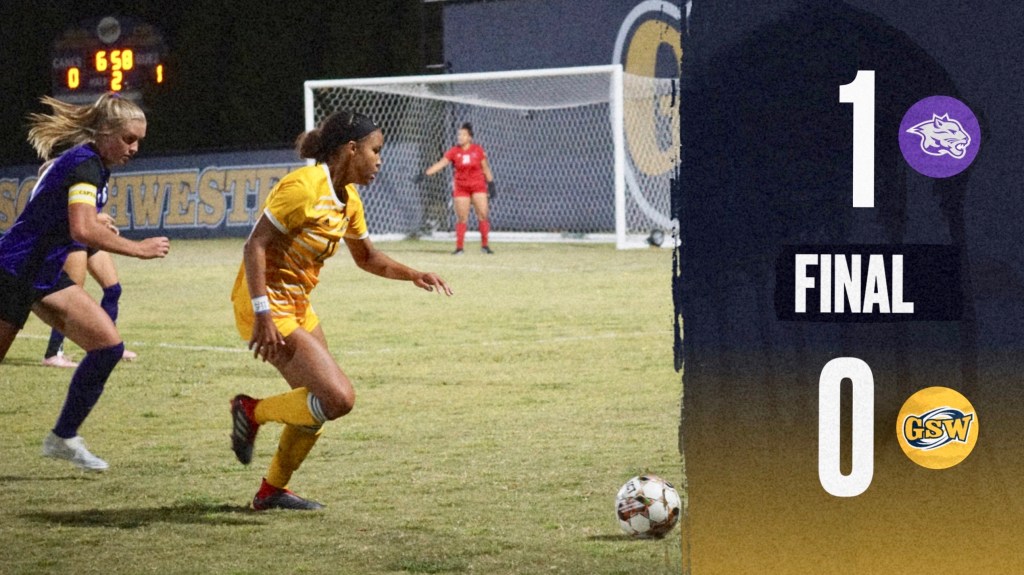 AMERICUS – Over the final 12 minutes of the Georgia Southwestern State University Women’s Soccer Team’s Peach Belt Conference match against Young Harris College, the Lady Hurricanes put forth a desperate effort to try and get an equalizer, as they trailed the Lady Mountain Lions 1-0. Unfortunately for GSW, they were not able to get that equalizer and fell to YHC 1-0 at Hurricane Field on Wednesday, September 28.

After a scoreless first half between both teams, the Lady Mountain Lions took the lead two minutes into the second half when Jhena Ellerbe scored off an assist from Thea Juul. About three minutes later, YHC nearly doubled its lead when Juul took a shot towards the bottom left corner of the net, but GSW sophomore goalkeeper Grace O’Shaughnessy was there to make the save.

The Lady Hurricanes were able to stop any further scoring from the Lady Mountain Lions and over the final 12 minutes, they ratcheted up their pressure on the YHC back line. In the 78th minute, GSW senior midfielder Natalie Martinez tried to tie the game when she took a shot towards the bottom right corner of the net, but YHC goalkeeper McKenna Peaster came up with the save. Then in the 83rd minute, GSW freshman midfielder Lucia Bustamante took a shot that sailed wide left of the net.

In the 86th minute, the Lady Hurricanes got off two more shots from Bustamante and freshman midfielder Teresa Rodriguez, but on both occasions, Peaster came up with a save for YHC and the Lady Mountain Lions went on to defeat GSW 1-0.

In total, the Lady Hurricanes had three shots on goal, while the Lady Mountain Lions came up with nine on the evening. O’Shaughnessy was quite busy in the net for GSW, as she came up with eight saves on the night, while her YHC counterpart Peaster came up with three saves.

The Lady Hurricanes will try to rebound from this setback when they travel up to Columbus on Saturday, October 1 for another PBC contest against the #3-ranked team in the nation in NCAA Division II, the Lady Cougars of Columbus State. Kickoff is scheduled for 2 p.m.