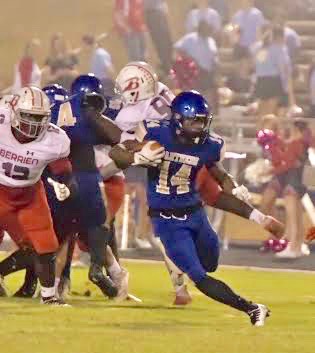 AMERICUS – In football games involving high-powered offenses that rack up points against each other, the team that has the ball last often ends up with the victory. Unfortunately for the Sumter County Panthers (SCHS) in their Homecoming game against the Berrien Rebels (BHS) on Friday, October 7, this was indeed the case. With 2:15 to go in the game, the Panthers had a 36-35 led, but BHS orchestrated a drive that led to a 33-yard field goal attempt by Mathew Lopez with 1.7 seconds left. Lopez ended up drilling the ball through the up rights as time expired and thus drilled a hole into SCHS hearts, handing the Panthers a 38-36 defeat on Homecoming Night at Alton Shell Stadium.

With the loss, SCHS falls to 1-5 overall on the season and 0-2 in GHSA Region 1-AA competition. With the win, the Rebels improve to 5-2 overall and 2-1 in region play. 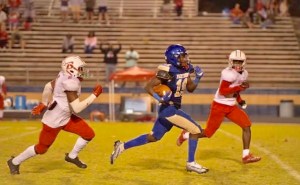 From the opening kickoff to Lopez’s game-winning kick, the contest between both teams was a wild and exciting back-and-forth scoring affair. The Rebels got the ball first and within 10 seconds took a 6-0 lead when Junior RB De’Mar Riley took the opening kickoff all the way back for a BHS touchdown. Lopez’s extra point was good and the Panthers quickly found themselves trailing the Rebels 7-0.

However, SCHS quickly found its footing on offense and responded when Senior Quarterback Cameron Evans found his fellow senior Brandon Pope in the end zone for a 40-yard touchdown pass. The extra point by Sophomore Kicker Jose Diaz-Perez was good and the game was tied at 7-7.

The Rebels responded by mounting a drive that resulted in a rushing touchdown by Riley. The extra point by Lopez was good and the Rebels were back on top 14-7.

However, the Panthers once again had a response. They were able to mount a drive that resulted in a 10-yard rushing touchdown by Freshman RB Aaron Kearse. The extra point by Diaz-Perez was missed, but SCHS only trailed 14-13. 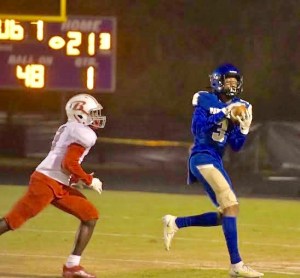 The Panthers’ defense was able to stop the Rebels on their next possession and got the ball back for the offense. Evans and company then took advantage of their good fortune when he connected with Pope for a 95-yard touchdown pass. SCHS decided to go for two and Junior Ja’Kory Wise was able to complete the two-point conversion to give the Panthers a 21-14 lead.

However, the Rebels’ special teams came up with another kickoff return for a touchdown when Junior Josiah Davis took the ensuing kickoff all the way back. The extra point by Lopez was good and the game was tied at 21-21 with 11:19 to go in the second quarter.

However, the Panthers mounted a drive that was capped off with a five-yard rushing touchdown by Wise. The extra point by Diaz-Perez was good and SCHS had a 28-21 lead.

SCHS would later have a chance to go up by 10 when Diaz-Perez tried a field goal, but the kick was blocked by the Rebels and they would later get another rushing touchdown by Davis from 12 yards out. Lopez’s extra point was good and the game was once again tied at 28-28.

The Rebels would later take a 35-28 lead on another touchdown and extra point, but the Panthers punched back by mounting another scoring drive that resulted in a one-yard touchdown run by Kearse. Instead of kicking the extra point, SCHS Head Coach Clifford Fedd decided to go for two and the gamble paid off when Wise scored the two-point try to give the Panthers a 36-35 lead with 2:15 left in the game.

However, the Rebels would have the final say in the game’s outcome. They were able to orchestrate a methodical drive and were able to run the clock all the way down to 1.7 seconds before Lopez booted the game-winning 33-yard field goal through the up rights to give the Rebels the 38-36 victory.

The Panthers, who have now lost four straight, will try to put an end to their losing streak when they travel to Eastman, GA next Friday night, October 14, to take on Dodge County. Kickoff is scheduled for 7:30 p.m.