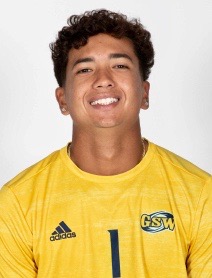 GREENWOOD, SC – After losing a hard-fought match to Young Harris College by the score of 3-2 last Wednesday, the Georgia Southwestern Men’s Soccer Team made the road trip up to Greenwood, SC with hopes of upsetting the #19-nationally ranked Bearcats of Lander University (LU). However, GSW gave up two goals in the first half and were unable to muster even one shot on goal the entire match. As a result, the Bearcats handed the Hurricanes their second straight Peach Belt Conference loss by the score of 2-0 on Saturday, October 15.

The loss puts GSW at 5-6-3 overall and the Hurricanes currently sit in fifth place in the PBC standings at 2-5-3. They have also gone 0-4-3 in their last seven matches and have not tasted victory since they defeated Clayton State 4-0 on the road back on September 14.

The Bearcats got their first goal in the 23rd minute of the game when Jonah Miller scored off an assist from Max Bolton. Then in the 31st minute, LU earned a corner kick and Julien Sagnol took a shot that was saved by GSW Goalkeeper Mauricio Uribe. However, a minute later, the Bearcats found their second goal of the match when Marco Gueli scored off an assist from Sagnol.

For the remainder of the match, the Bearcats had the upper hand during the run of play and it showed by the fact that they took a total of 14 shots with six of them being on goal. The Hurricanes, on the other hand, only came up with two shots the entire match and neither of them were on frame.

Uribe came up with four saves on the day for GSW, while his LU counterpart, Lorenzo Ferrari, did not have to make a save the entire match.