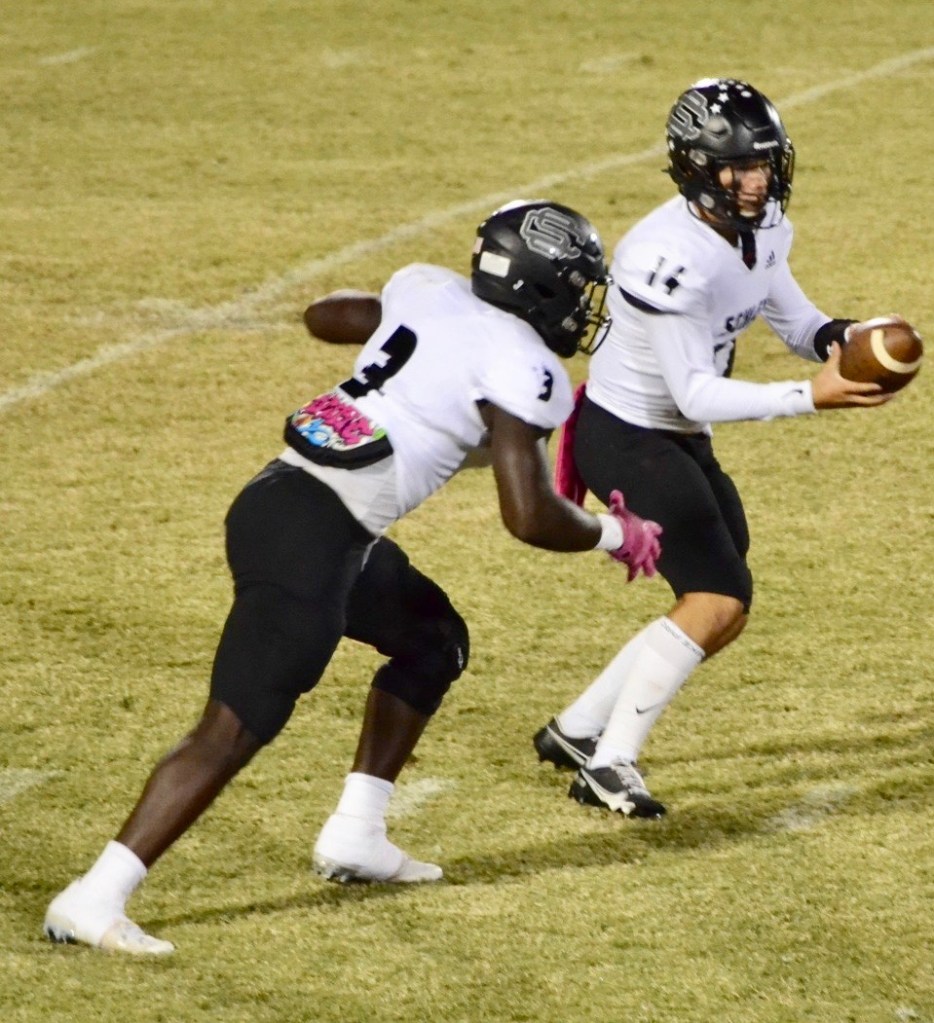 Schley County Junior Quarterback Jay Kanazawa (14) is seen here handing the ball off to Sophomore Running Back Zayden Walker (3). Kanazawa completed 16 of 24 passes for 324 yards and threw five touchdown passes to lead the Wildcats to a 47-13 victory over Taylor County. Photo by Shelley Bishop

With 3:35 to go in the first quarter, the Wildcats took an early lead when Kanazawa found Jackson for a 30-yard touchdown reception. The extra point by Junior Miguel Yanez-Rueda was good and SC had an early 7-0 lead.

However, the Vikings responded with 10:06 to go in the second quarter when Fullback D.J. Jenkins scored a rushing touchdown from four yards out. The extra point by Cody Moncrief was good and the score was tied at 7-7. 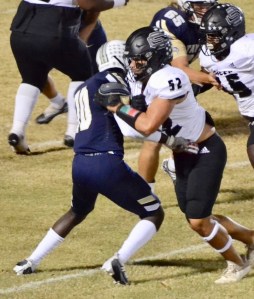 Almost two minutes later, the Vikings were able to take a 13-7 lead when TC Strong Safety Cameron Lawhorn forced a fumble. Jenkins then picked up the loose football and took it 60 yards the other way for a Vikings touchdown. TC tried to go for two, but the try failed. Nevertheless, the Wildcats found themselves trailing the Vikings 13-7 with 8:57 to go before halftime.

However, SC found its footing on its next offensive possession. Senior Running Back Malachi Banks was able to break through the TC Defensive Line and rumbled 18 yards for a rushing touchdown. The extra point by Yanez-Rueda was good and the Wildcats were back in front 14-13 with 7:26 to go before the half.

About five minutes later, the Wildcats added to their lead when Kanazawa completed a 62-yard touchdown pass to Jackson. The extra point by Yanez-Rueda was no good, but SC had a 20-13 lead with 2:40 to go before halftime. 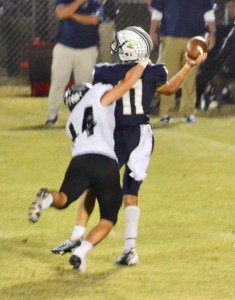 Then with just 17 seconds left before halftime, the Wildcats were able to put more points on the scoreboard when Kanazawa completed a 12-yard touchdown pass to Jackson. SC tried to go for two, but the try failed. Nevertheless, the Wildcats had a 26-13 lead at the half, with momentum clearly on their side.

The second half totally belonged to the Wildcats. With 3:08 to go in the third quarter, Kanazawa threw a 79-yard touchdown pass to JaLewis Solomon. The extra point by Yanez-Rueda was good and the Wildcats had a 33-13 lead.

Then with 56 seconds to go in the third quarter, SC struck again when Junior Wide Receiver Carson Westbrook took a punt return 55 yards for a touchdown. Yanez-Rueda’s extra point was good and the Wildcats led 40-13 with the fourth quarter still to come.

With 7:35 to go in the fourth, the Wildcats put the “cherry on the whip cream”, as it were when Kanazawa threw a 36-yard touchdown pass to Solomon. The extra point by Yanez-Rueda was good and SC left Butler with a 47-13 victory.

The win puts the Wildcats at 5-2 overall and they are still undefeated at 4-0 and in first place in the region standings. As for TC, the loss drops them to 2-5 overall and 1-1 in region play.

The Wildcats defense was stout all night and gave the offense the opportunities to score. The defense registered five sacks on the night, as Zayden Walker (Soph.), Demarkis Clark (Sr.), Ethan Sellers (Jr.), Jack Clark (Jr.) and Reggie Hinton (Sr.) each had a sack in the contest.

The Wildcats will now focus on their next opponent, the Manchester Blue Devils, whom they will see on the road at Manchester on Friday, October 21 in a very important region contest. In all likelihood, this game will decide the region championship, as both teams come into this matchup with 4-0 region records. Kickoff is scheduled for 7:30 p.m.