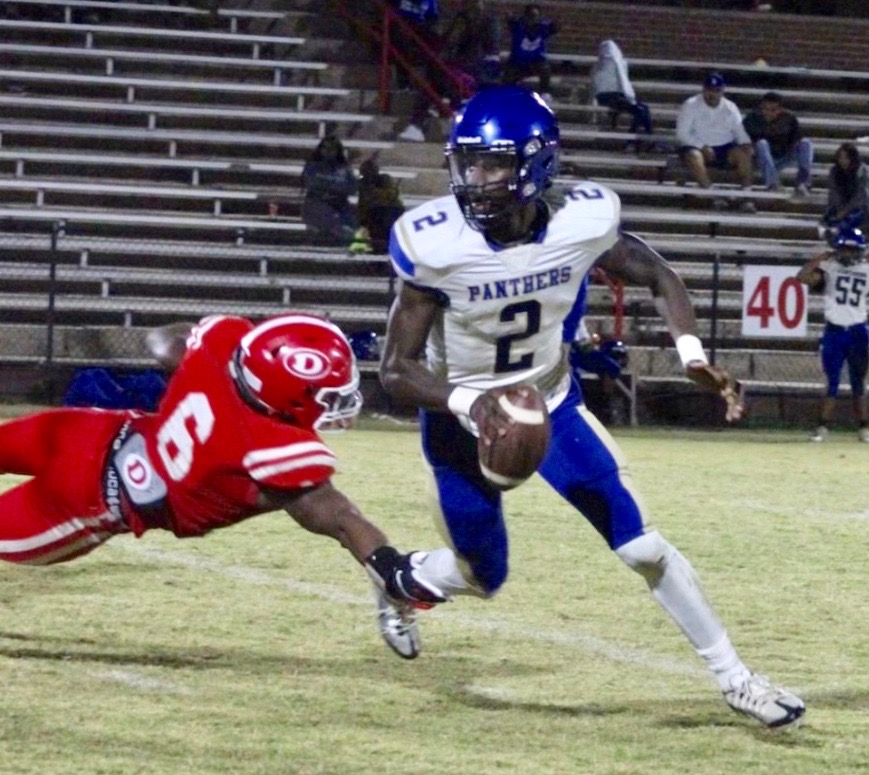 EASTMAN, GA – Having dropped four straight contests since their 26-21 victory over Westover back on August 26, the Sumter County Panthers (SC) were desperately hoping to put a halt to their four-game losing streak when they made the trip over to Eastman, GA on Friday, October 14 to take on Dodge County in another GHSA Region 1-AA contest, but unfortunately for SC, they struggled offensively and could not stop the Indians’ offense for much of the night. As a result, the Panthers fell to DC 35-14 and have now dropped five straight games.

The Panthers received the ball to start the game and they would later have a chance to take the lead with 4:08 to go in the first quarter when Jose Diaz attempted a field goal, but Diaz’s 27-yard attempt was blocked by DC’s Lamarie Mitchell.

A little more than three minutes later, DC added to its lead when running back Denton Gordon broke through the Panthers’ defensive line and scored a 45-yard rushing touchdown. The extra point by Jackson was good and the Panthers trailed 14-0. 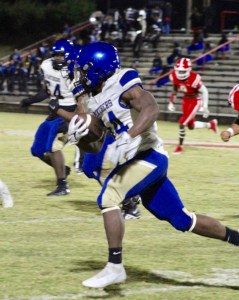 While the SC offense struggled, the Panthers’ special teams tried to do what they could to keep SC in the game. With 2:58 to go before halftime, the Indians decided to attempt a 28-yard field goal, but Corderian Leverett blocked Jackson’s FG attempt to keep the Panthers’ deficit at 14.

This brought life and hope to the SC offense. With 54.4 seconds to go before halftime, quarterback Cameron Evans led the Panthers on a scoring drive that was finished off by a 13-yard touchdown pass from Evans to Brandon Pope. The extra point by Diaz was good and the Panthers were back in the game, trailing 14-7.
However, the Indians responded with a quick scoring drive that resulted in a 15-yard touchdown pass from Johnson to Keegan Williams with 25 seconds left before the half.

On their last possession before halftime, the Panthers tried to score on a trick play when Evans dumped the ball off to Omari Woodard, who then attempted a pass intended for Pope, but the pass was intercepted by Keegan Williams.

Just like that, the positive momentum that came from Leverett’s blocked field goal and the touchdown pass from Evans to Pope was snuffed out and the Panthers would have to regroup at halftime, as they trailed DC 21-7.

In the second half, the Indians took over and pulled away. With 10:21 to go in the third quarter, Johnson threw a 58-yard touchdown pass to J.J. Dean. The extra point by Jackson was good and the Panthers trailed 28-7.

Then with 1:26 to go in the third, Johnson connected with Williams again for a 17-yard touchdown pass. Jackson’s extra point was good and the Panthers found themselves in a deep hole, trailing 35-7.

SC tried to keep hope alive when Evans connected again with Pope on a 39-yard touchdown pass with 2:47 to go in the game, but it was too little, too late as the Indians would go on to win 35-14.
The Panthers will try once again to end their losing streak when they host Fitzgerald on Friday, October 21. Kickoff is scheduled for 7:30 p.m.