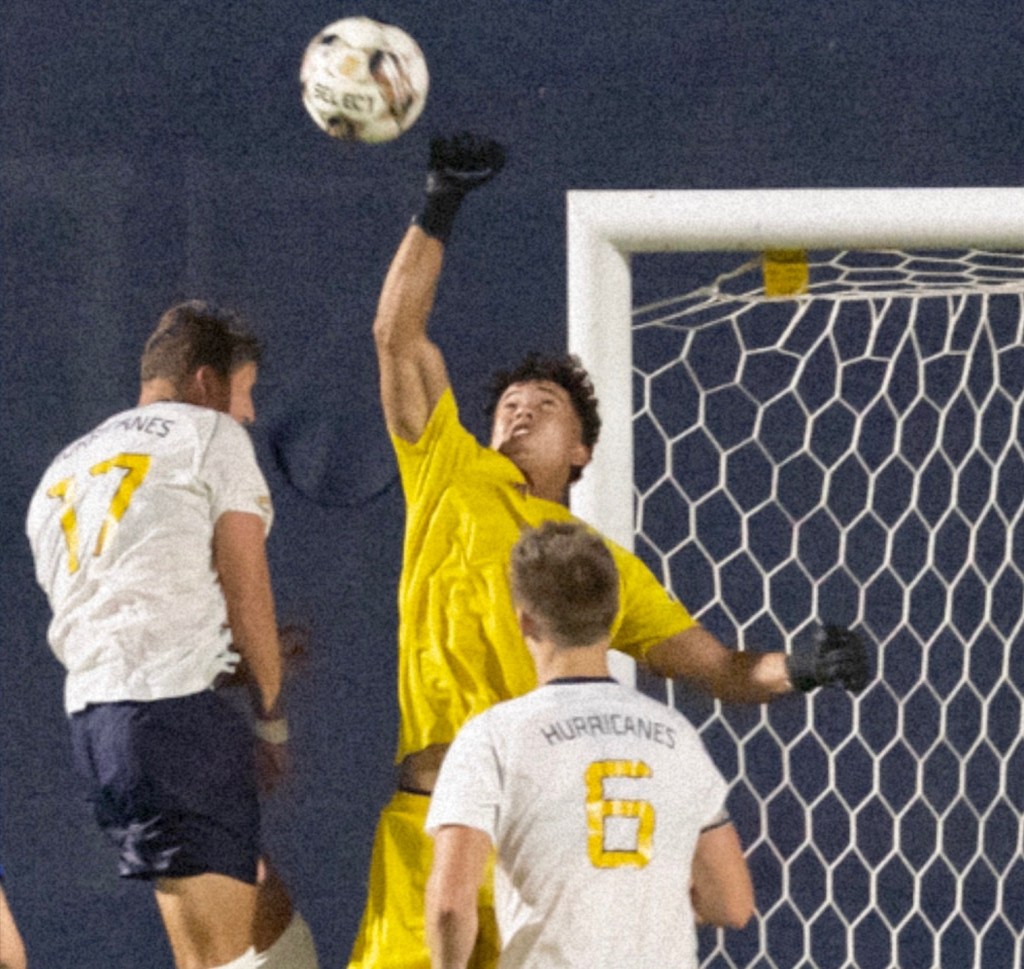 GSW Junior GK Mauricio Uribe earned his PBC-leading fifth straight shutout of the season in the Hurricanes’ 0-0 draw with USC Aiken. Uribe came up with seven saves in the match. Photo by GSW Athletics

AIKEN, SC – After their 2-0 loss at Lander University on Saturday, October 15, the Georgia Southwestern Men’s Soccer Team (GSW) made the 56-mile journey over to Aiken, SC to take on the Pacers of USC Aiken in their next to last match of the season on Monday, October 17. While they were not able to earn a victory, the Hurricanes battled USCA to a 0-0 draw and gained a little bit of satisfaction going into their final game of the season against Flagler College.

This was also the fifth shutout of the year posted by GSW Goalkeeper Mauricio Uribe. The junior from Miami, FL leads the Peach Belt Conference in that category and he came up with a total of seven saves against the Pacers.

The Hurricanes are now 5-6-4 overall and 2-5-4 in the Peach Belt Conference standings with one more match remaining in the regular season against Flagler.

In the 11th minute of the match, GSW had a chance to take the lead on a shot by Matteo Landais, but his shot was saved by USCA Goalkeeper Tyler Hughes. Seven minutes later, Chris Salamatou had a chance to give GSW the lead, but once again, Hughes came up with the save.

Throughout the remainder of the first half, the Hurricanes continued to put pressure on the USCA back line, but they could not come up with a goal and both teams went into halftime with the score deadlocked at 0-0.

Then with 17 minutes to go in the match, Uribe came up big again by making two saves on a shot from USCA’s Finlay Dyer and on a header by Pinto.

Approximately four minutes later, Cole Davison had a chance to give GSW the lead, but Hughes once again came up with the save.

With three minutes remaining in the match, the Hurricanes desperately tried to get a last-minute goal and were able to earn two straight corner kicks, but Davison’s header was saved by Hughes in the 88th minute and the game ended without a goal from either team.

Both goalkeepers were very busy in this match, as Uribe came up with seven saves on the day for the Hurricanes and Hughes came up with five for the Pacers.

The Hurricanes will play their final game of the regular season on Saturday, October 22 at home against Flagler College at 7 p.m. It will be Senior Day at GSW and for five seniors, Cole Davison, Chris Salamatou, Mohammed Amine Mahrous, Will Carter and Vincent Montoya, it will be their final regular season game in a Hurricane uniform.