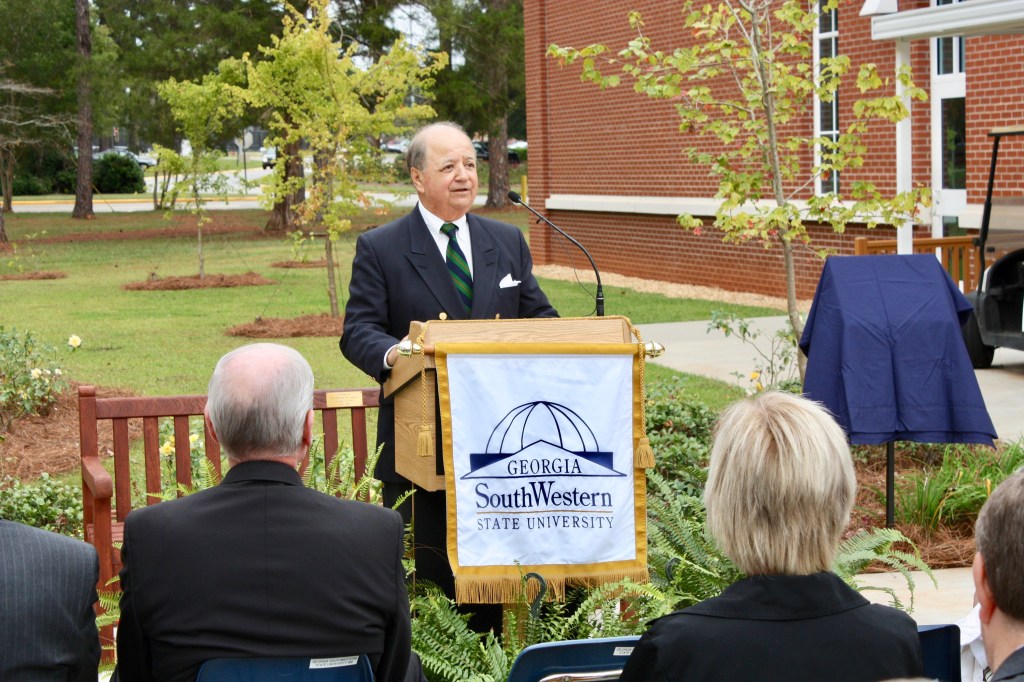 Capitan, the University’s eighth president, served from 1979-1995. Capitan’s tenure as GSW president brought growth in academic and external programing, new construction, and enrollment. New degrees under his leadership included the Bachelor of Fine Arts, the Bachelor of Science in computer information systems, computer science, and computer science technology, and an expanded Bachelor of Business Administration.

Capitan’s administration saw a stronger emphasis on intercollegiate athletics, including football, which never had a losing season in its four years, expansion of the Continuing Education Program, and extension of the Third World Studies Program. Capitan led construction efforts for the Fine Arts Building, the Deriso Pool, the Education Center, and the Westbrook Bell Tower.

Capitan was instrumental in establishing the GSW Foundation, which was chartered on Dec. 4, 1979, and the Rosalynn Carter Institute founded in 1987.

Capitan was inducted into the 1995 GSW Athletics Hall of Fame, and in 2013, was recognized by the naming of Capitan Plaza. Situated between Carter I and Carter II of the Rosalynn Carter Health and Human Sciences Complex, the Capitan Plaza includes a commemorative bronze plaque, benches, trees and flowers planted specifically for the area.

“The entire GSW community extends its deepest sympathies to the family and friends of Dr. Capitan,” said GSW President Neal Weaver, Ph.D. “Dr. Capitan’s contributions to Georgia Southwestern were invaluable in the years prior to becoming a state university. He was dedicated to GSW and enhancing the connection between campus and the community.”

He remained involved with the University after his retirement and was named President Emeritus.

Capitan’s wife, Dolores Capitan, was involved on campus as well, as she championed for writing across the curriculum. Prior to his retirement, Capitan established the Dolores Capitan Writing Award in honor of his wife who was a journalist before moving to Americus. This award is given each year to both academic and creative writers who are students at GSW.