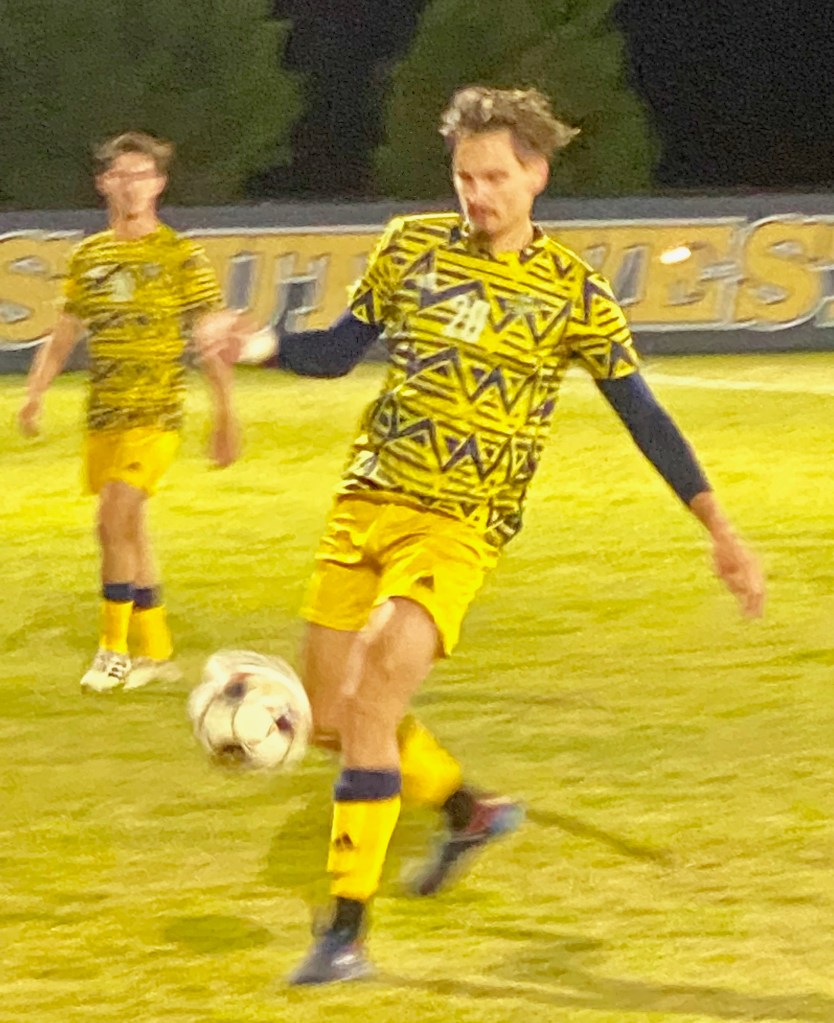 GSW Senior Centerback Vincent Montoya was one of five seniors playing in their final home game against Flagler College on Senior Night. Photo by Ken Gustafson

AMERICUS – The Georgia Southwestern Men’s Soccer Team (GSW) came into Wednesday night’s final regular season game against Flagler College (FC) hoping to send its five seniors out with a victory over the Saints in their final game at Hurricane Field. However, the Hurricanes were not able to produce any goals and thanks to FC goals from Paul Hansen in the 36th minute and Max Lambertz in the 49th minute, the Saints handed GSW a 2-0 defeat in the final regular season game for GSW seniors Cole Davison, Vincent Montoya, Chris Salamatou, Mohammed Amine Mahrous and Will Carter.

With the loss, the Hurricanes finish the regular season at 5-7-4 overall and they will finish in fifth place in the Peach Belt Conference (PBC) standings at 2-6-4. However, the season is not over for GSW as the Hurricanes will be the #5 seed in the first round of the PBC Tournament to be played next week.

“We came into the match looking for effort and we got that tonight,” GSW Head Coach Eric Crawford said. “I’m not happy with the result obviously, but we’ve played three games in five days and we’ve had guys that have gone 90 minutes in all three games and the effort that they gave tonight is something to be proud of.” 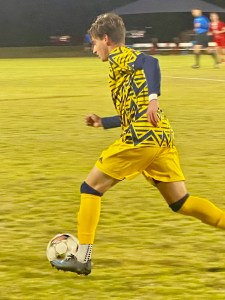 GSW Junior Midfielder Eli Fenton pushes the ball down the field for the Hurricanes.
Photo by Ken Gustafson

The Saints got their first goal of the match in the 36th minute when Jesse Van Krimpen sent a pass to Paul Hansen, who promptly sent a shot into the upper part of the net. FC continued to create more chances and shots, but the Hurricanes were able to hold them off for the remainder of the first half and went into halftime trailing 1-0.

In the opening seconds of the second half, the Hurricanes nearly tied the game when Donnell Clements took a shot on goal, but FC Goalkeeper Tirso Trueba was able to come up with the save.

Then in the 49th minute of the match, the Saints got their insurance goal when Max Lambertz scored off an assist from George Winser. In the 57th minute, the Saints created an opportunity to increase their lead to 3-0 when Lambertz took a shot towards the bottom left part of the goal, but GSW Goalkeeper Mauricio Uribe came up with the save to keep the score at 2-0 in favor of FC.

In the 85th minute, GSW had an opportunity to get its first goal of the match, but Chris Salamatou’s shot on goal was saved by Trueba at the bottom right corner of the net. About a minute later, the Hurricanes had another opportunity to score off a corner kick, but the shot by Ian Rodriguez was once again saved by Trueba and GSW would go on to lose to FC 2-0.

Throughout the match, the Saints were able to create more chances and took a total of six shots on goal, with two of them finding the back of the net. The Hurricanes, on the other hand, were only able to get off three shots on goal.

Uribe had a total of four saves for the Hurricanes, while Trueba came up with a total of three for the Saints.

Now that the regular season is over, GSW will turn its focus to next week’s PBC Tournament. The Hurricanes will be the #5 seed in the tournament and will play their first round match on the road. “We’re looking forward to it. It’s a new season starting next week,” Crawford said. “Records don’t matter once you get into the playoff games and hopefully, we will get some guys back healthy and have a good week of training and be ready to go.”