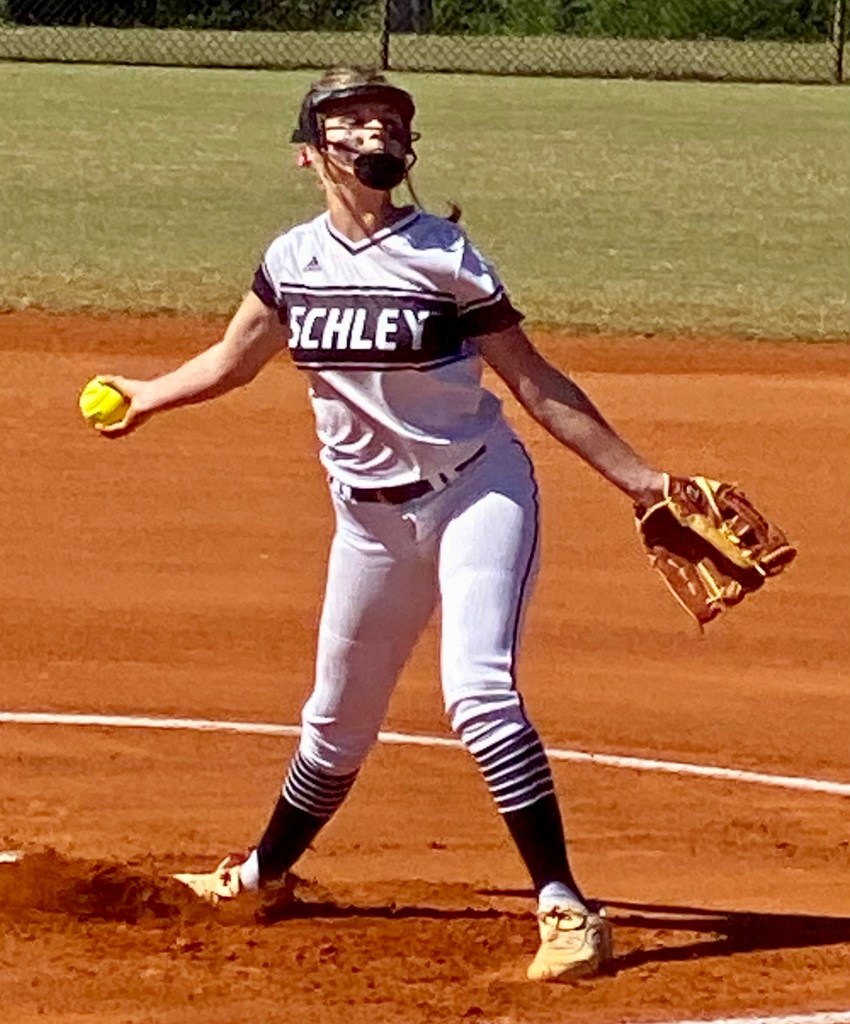 Schley County starting pitcher Alyssa Harry gave up one run and struck out seven batters in the Wildcats’ 17-1 victory over Wilkinson County in the first game of the state playoffs. Photo by Ken Gustafson

ELLAVILLE – The Schley County Wildcats Softball Team (SCHS) had no problem winning their first two games of the Georgia High School Association (GHSA) Class A-Public State Playoffs. They routed Wilkinson County 17-1 in Game 1 and throttled the Lincoln County Red Devils 14-0 on Thursday, October 20 at Wildcat Park to move to within one win of advancing to the state quarterfinals in Columbus.

This is a new format in the softball state playoffs that the GHSA is trying this year. It is the same format that college baseball and softball uses for its national tournaments. There are eight regional hosts in each of the classifications in GHSA Softball. The Wildcats are hosting one of those eight regionals in the Class A-Public State Tournament and the winners of those eight regionals will advance to the state quarterfinals in Columbus.
As for the Wildcats’ performance, SCHS Head Coach Jody Sellers was extremely pleased with how his club hit the ball in these games.

“We’ve been swinging the bat pretty well lately,” Sellers said. “We’ve had a couple of weeks off. I didn’t schedule any games the last week of the season. I told them that the best ball we were playing was in the summer when we were practicing a lot and then showing up and playing some summer games, so I wanted to give us a little break at the end of the season and we worked a lot on hitting. We had an inter-squad scrimmage and we’ve been swinging the bats really well lately and carried it to a game. It’s nice to see offense win you a game. We hit a lot of balls well, taking good swings on good pitching and we put a lot of pressure on them. That’s kind of our MO. If we can put the ball in play and put pressure on folks, we usually pitch well and play defense. It was a really exciting first day. We put ourselves in the driver’s seat to go to Columbus. We’ve got to show up and do it again tomorrow.” 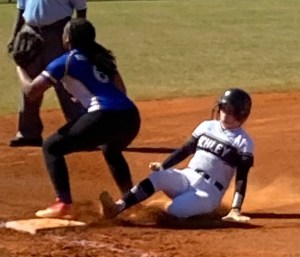 Schley County third baseman Lily Walker went a combined 2 for 3 with three RBIs and two runs scored in the Wildcats’ two wins in the Ellaville Regional of the state playoffs.
Photo by Ken Gustafson

Being that they are undefeated in this double-elimination format, the Wildcats will face the winner of the losers bracket game between Lincoln County and Mount Zion. The Red Devils defeated MZHS 16-13 Thursday morning before losing 14-0 to the Wildcats. Wilkinson County (WCH) was eliminated from the competition on Thursday, as they lost to the Wildcats 17-1 and were later defeated by the MZHS Eagles.

In their first game against the WCH Warriors, the Wildcats (18-9) jumped on them early by scoring 15 runs in the bottom of the first inning. They were able to take advantage of numerous errors, walks and wild pitches, but also belted out seven hits. Three of those hits were RBI triples by Lily Walker and Zoe Molina and an RBI double by Lizzie Barineau. 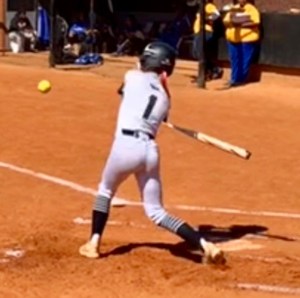 Then in the bottom of the second, the Wildcats scored two more runs on two hits and they continued to take advantage of two hit batsman, an error and a fielder’s choice RBI.

The Warriors scored their only run of the game in the top of the third, but the Wildcats were able to end the run-ruled game when starting pitcher Alyssa Harry struck out Ajaydah Glover for the third out.

Makena Wurtz led the SCHS offense by going 2 for 2 at the plate and Abbie Sellers went 1 for 2 with two RBIs and a run scored.

Alyssa Harry was the Wildcats’ starting pitcher and she gave up only one run and struck out seven in three innings of work.

In Game 2 against Lincoln County (LCH), the Wildcats once again jumped out to a big, early lead. They scored eight runs on six hits in the first inning, with three of those hits being for extra bases. Lily Walker drove in a run on an RBI double, Lizzie Barienau belted a triple into right field and Destiny LeCroy drove in a run on another RBI double.

Both Wurtz and Brenna Jacobs also drove in runs on RBI singles in the inning.

In the bottom of the second, SCHS continued to put the pressure on by scoring six more runs on four hits. Kalli Bishop led off the frame with a double and Emma Walker would later drive in a run on a sacrifice fly. Barineau drove in a run on an RBI single and LeCroy drove in two more runs on a double to left field.

That 14-run explosion by the Wildcats effectively ended the game, though the game was extended to the top of the fourth inning. In the top of the fourth, The Red Devils got a runner on base with no outs when SCHS starting pitcher Makena Wurtz walked the leadoff batter Autumn Crook, but Wurtz got Cayden Glaze to fly out to left field for the first out. However, with Crook on first and one out, Sadie Danner hit a line drive right at Wurtz, who caught the ball and threw to Barineau at first to double off Crook to end the inning and the game. 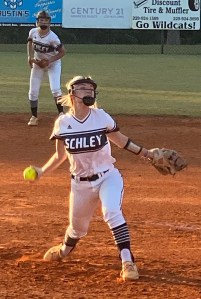 Schley County pitcher Makena Wurtz pitched a four-inning no-hitter with a walk and three strikeouts in the Wildcats’ 14-0 win over Lincoln County.
Photo by Ken Gustafson

Makena Wurtz started in the circle for the Wildcats. She pitched a four-inning, scoreless no-hitter with one walk and three strikeouts.

Lincoln County will play Mount Zion in the losers bracket game on Friday morning, October 21 at 10 a.m. The loser of that game will be eliminated, but the winner will face the Wildcats at approximately 12:30 p.m. Friday afternoon. Should the Wildcats win that game, they will automatically advance to the state quarterfinals in Columbus.