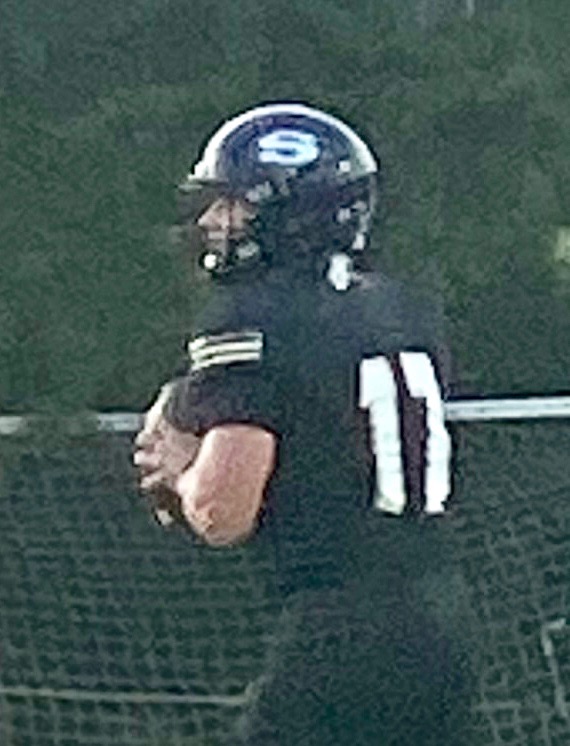 Southland Academy Senior Quarterback Chase Ledger completed 12 of 16 passes for 209 yards with one passing touchdown and another on a quarterback keeper in the Raiders’ 29-23 overtime loss to Valwood. ATR Archive

AMERICUS – The Southland Academy Raiders (SAR) came into their GIAA Region 3-AAA matchup with Valwood (VS) Friday night determined to try an end a three-game losing streak. Throughout the game, the Raiders battled valiantly with Valiants and the outcome couldn’t be decided at the end of regulation. However, with the score tied at 23-23 in the overtime session, the Valiants had the ball and orchestrated a four-play, 25-yard drive that resulted in a rushing touchdown by VS Quarterback Brooks Best to give the Valiants a 29-23 overtime victory over the Raiders at Harvey Simpson Stadium.

The Valiants opened the scoring with 11:02 to go in the first quarter when Best hooked up with Eli Pay for a 25-yard touchdown pass to complete a 13-play, 92-yard drive. The extra point was good and the Raiders trailed early 7-0.

However, SAR fought back when quarterback Chase Ledger threw a 51-yard touchdown pass to Henry Johnson. The Raiders decided to go for two and succeeded to take an 8-7 lead at halftime.
At halftime, the 2022 Southland Homecoming Court was presented and for Senior Holliday Miles, her dream was realized as she was crowned the 2022 Southland Academy Homecoming Queen.

With 3:48 to go in the third quarter, the Valiants regained the lead when running back Triston White broke through the SAR defense and scampered 68 yards for a touchdown. VS decided to go for two and succeeded, taking a 15-8 lead.

However, the Raiders had another response. In the fourth quarter, Ledger led the SAR offense on a nine-play, 78-yard drive that resulted in the senior quarterback scoring a touchdown on a quarterback keeper. Johnson’s extra point try was good and the score was tied at 15-15.

However, the Valiants responded with a seven-play, 65-yard scoring drive that was capped off by a 41-yard rushing touchdown by White, his second of the game. The Valiants succeeded in scoring the two-point try and they led 23-15 with 6:53 left in regulation.

But once again, the Raiders showed their heart as Ledger led the offense on a seven-play, 74-yard scoring drive. It was capped off by an 11-yard touchdown pass from Ledger to Trey Sellers. The two-point attempt was good and the score was tied at 23-23, but it would take overtime to decide a winner.
However, the Valiants ended up having the final day as Best scored the game-winning touchdown on a QB keeper from 11 yards out to win the game for VS.

The Raiders will try to end their four-game losing streak when they travel down to Chula, GA to take on Tiftarea Academy next Friday, October 28. Kickoff is scheduled for 7:30 p.m.