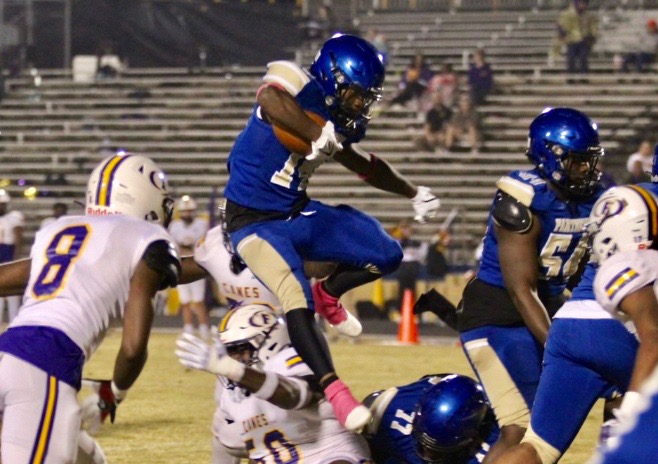 AMERICUS – In spite of several players being out due to injury and sickness, the Sumter County High School Football Team (SCHS) gave a valiant effort against the Fitzgerald Purple Hurricanes (FHS), the #1 ranked team in the state in GHSA Class AA. However, the Panthers struggled with penalties and could not stop the FHS offense for most of the night. As a result, they suffered a 33-13 defeat at the hands of the top-ranked Purple Hurricanes on Friday, October 21 at Alton Shell Stadium.

The Purple Hurricanes scored first on a rushing touchdown from running back Cam Jackson and added the extra point, making it 7-0 FHS with 6:31 to go in the first quarter. FHS shortly thereafter added to its lead when Jackson scored the second of his two rushing touchdowns from four yards out. The extra point was botched due to a bad snap, but the Panthers trailed FHS 13-0. 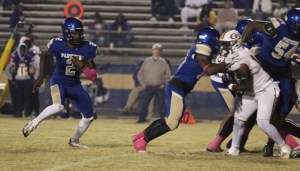 However, SCHS finally responded with a positive drive on offense. They were able to move the ball down the field and cashed in when running back Ja”Kory Wise scored a rushing touchdown. The extra point was no good due to a bad snap, but the Panthers had life, trailing 19-6.

However, just as the Panthers were waking up and getting themselves back into the game, the Purple Hurricanes took away that positive momentum when Demetrius Brown ran the ensuing kickoff all the way back for an FHS touchdown. The Purple Hurricanes tried a two-point conversion and succeeded, increasing their lead to 27-6 by halftime.

The Panthers got the ball to start the second half and got a promising start to the third quarter when Wise ran the ball all the way down inside the FHS 10-yard line. However, SCHS failed to put the ball in the end zone on four straight attempts and turned the ball over on downs.

The Purple Hurricanes took advantage and responded with a drive that went the length of the field and resulted with a touchdown by Christian Solomon. The extra point was no good, but the Panthers, having been so close to a touchdown, found themselves trailing even further by the score of 33-6.

On the next SCHS possession, the Panthers hurt themselves with holding and illegal procedure penalties. This forced a third down and 20 situation from the SCHS 25-yard line as the third quarter ended. But on third and 20 at the start of the fourth quarter, quarterback Cameron Evans’ pass was incomplete and the Panthers were forced to punt. However, the punt was partially blocked and the Purple Hurricanes had excellent field position at the SCHS 34. 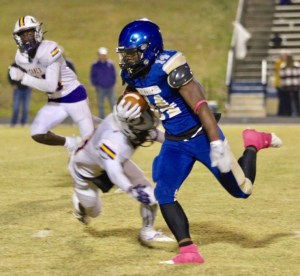 SCHS Running Back Ja”Kory Wise runs through a tackle against Fitzgerald.
Photo by Carla Whitley

FHS was able to move the ball into SCHS territory and the problem was compounded by a personal foul penalty against the Panthers, which moved the ball further into SCHS territory. The Purple Hurricanes were flagged for an illegal shift, but were still able to move the ball inside the Panthers’ 20. However, on the next play from scrimmage, the Panthers forced a fumble and recovered the football at the SCHS 13. This gave the SCHS offense another opportunity to mount a scoring drive and Evans was able to run for 12 yards on the first play from scrimmage. Then on second and seven, Wise ran the ball down to the SCHS 45 for first down yardage. The Panthers had another promising drive going and were close to FHS territory.

A couple of plays later, Wise got three yards on third and eight and would later gain first down yardage by running the ball into FHS territory. Then on third and 13 from the FHS 43, Evans broke through the Hurricanes’ defense and rumbled 43 yards for an SCHS touchdown. The extra point was good and the Panthers had a positive scoring drive, even though they would go on to lose the game by the score of 33-13.

SCHS will try once again to put a halt to its six-game losing streak when the Panthers travel down to Sylvester to take on the Worth County Rams in another GHSA Region 2-AA contest on Friday, October 28. Kickoff is scheduled for 7:30 p.m.