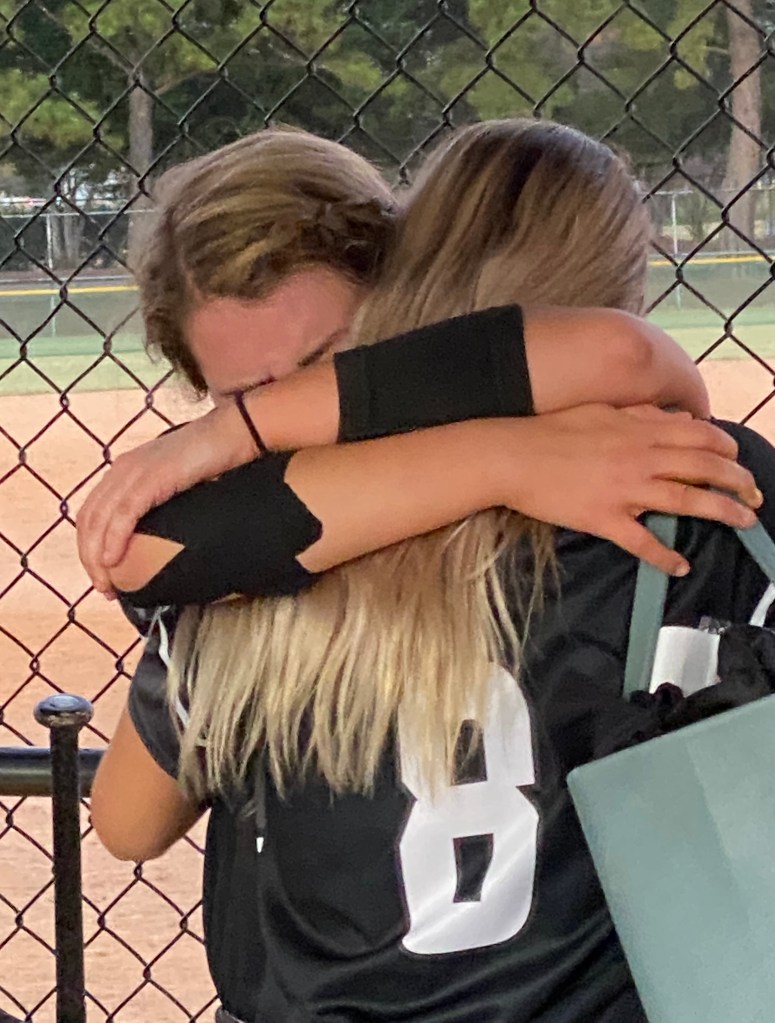 Schley County senior Jaelyn Wynn (#8) and junior Destiny LeCroy embrace each other after the Wildcats lost to Wilcox County 13-4 in the GHSA State Softball Quarterfinals. Photo by Ken Gustafson

COLUMBUS – Throughout the summer of 2022, members of the Schley County High School Softball Team (SCHS) trained in the hot sun, both as a team in practice scrimmages and individually. By the start of the season, the Wildcats were ready to transfer that summer work ethic on to the diamond and it paid off with a region championship. They were then able to win their regional tournament and advance to the GHSA Class A Division 2 State Quarterfinals in Columbus. In their first game of the “Elite Eight” they lost a hard-fought battle to Lanier County by the score of 5-3. This put SCHS on the brink of elimination, as the Wildcats would face the Wilcox County Patriots (WCH), who lost their first game of the season to Georgia Military in their first state quarterfinal game. SCHS came into Thursday’s survive and advance game against the 26-1 Patriots ready to pull off a win and advance to Friday’s action, but they fell behind early by the score of 5-0 and could not catch up. As a result, the Wildcats (19-11) saw their season come to an end with a 13-4 loss to WCH at the South Commons Softball Complex in Columbus.

In spite of the season-ending loss, SCHS Head Coach Jody Sellars could not have been more proud of his team for how they performed throughout the season and expressed his joy of being their coach.
“It has been a joy. I just got threw telling them that seven years ago, I made the decision to coach softball and it’s one of the best decisions I’ve ever made,” Sellars said. “I truly enjoy coaching the girls. These girls have been with me for a while and I’m really proud of them. They could have rolled over early and just given up. They stayed up. They tried their best to battle. That’s all you can ask for.” 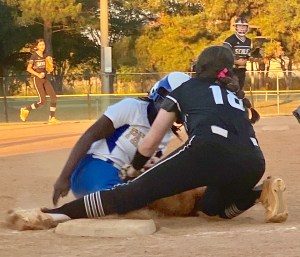 Sellars went on to say that he told his team during its post-game meeting that the game of softball can teach so much about life lessons, such as dealing with adversity and the ebbs and flows. “I hope that I taught them something and they learned something from it so that my seniors can take it with them in life,” Sellars said. “I stressed to the ones coming back the importance of working hard in the off-season. Overall, it was a really good body of work by these girls…a region championship and an Elite Eight appearance. I’m really proud of them.”
For four seniors: Jaelyn Wynn, Mackenzie Pugh, Mackena Wurtz and Zoe Molina, it was their final game of their softball careers in an SCHS uniform.

The Patriots stuck for two runs in the top of the first when Zeriyah Martin drove in a run on a single and Mayghan Hanner drove in another run on an RBI double. Then in the top of the second inning, the Patriots added three more runs on three hits, including a solo home run over the left field fence by Hanner. By this time, the Wildcats trailed WCH 5-0.

The Patriots made it even more difficult for SCHS in the top of the fourth when they scored three more runs on three hits. However, the Wildcats finally got rid of the goose egg on the scoreboard in the bottom of the fourth. With runners at first and second and one out, Lily Walker singled to load the bases and Abbie Cheek drove in the first SCHS run of the game by drawing a walk from WCH starting pitcher Mary Kathryn McDuffie. Emma Walker then drove in another run on a fielder’s choice and the Wildcats trailed 8-2. 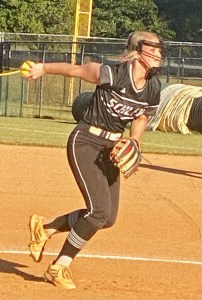 Schley County junior starting pitcher Lizzie Barineau gave up five runs on six hits, walked two batters and struck out one in the Wildcats’ 13-4 loss to Wilcox County in the state quarterfinals.
Photo by Ken Gustafson

The Patriots added a run in the top of the fifth, but the Wildcats came right back with a run in the bottom half of the inning on an RBI single by Kallie Bishop, making the score 9-3 in favor of WCH.

However, the Patriots struck again for another big inning in the top of the sixth. They scored four runs on five hits to take a 13-3 lead, but the Wildcats would not quit and responded with a run in the bottom of the sixth on a sacrifice fly by Zoe Molina.

Unfortunately for SCHS, that was as close as the Wildcats could get and they went on to lose to the Patriots 13-4 to end their season. 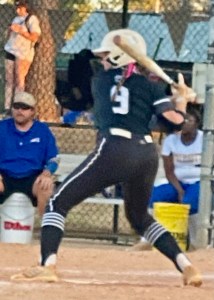 Lizzie Barineau got the start in the circle for the Wildcats, but only lasted two innings. She gave up five runs on six hits, walked two batters and struck out one. 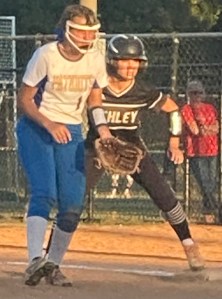 Schley County sophomore Dixie Justice serves as a pinch runner for the Wildcats against Wilcox County.
Photo by Ken Gustafson

Makena Wurtz came on in relief of Barineau. She gave up eight runs on 13 hits, walked two batters and struck out one through four innings of work. 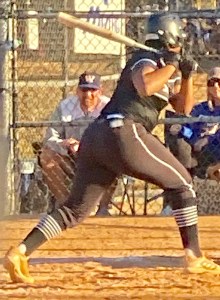 Schley County sophomore right fielder Kalli Bishop went 1 for 1 at the plate with a single, an RBI, three walks and scored a run against Wilcox.
Photo by Ken Gustafson

WCH (27-1) will advance to the Final Four of the GHSA Class A Division 2 State Tournament and will face Hawkinsville on Friday, October 28 at 11 a.m.

Many of the Wildcats will go on to compete in other sports throughout the year, such as basketball and track. While four Wildcats will be graduating next spring, the rest of the team should be back in the fall of 2023 for another exciting season of Schley County Wildcats Softball.