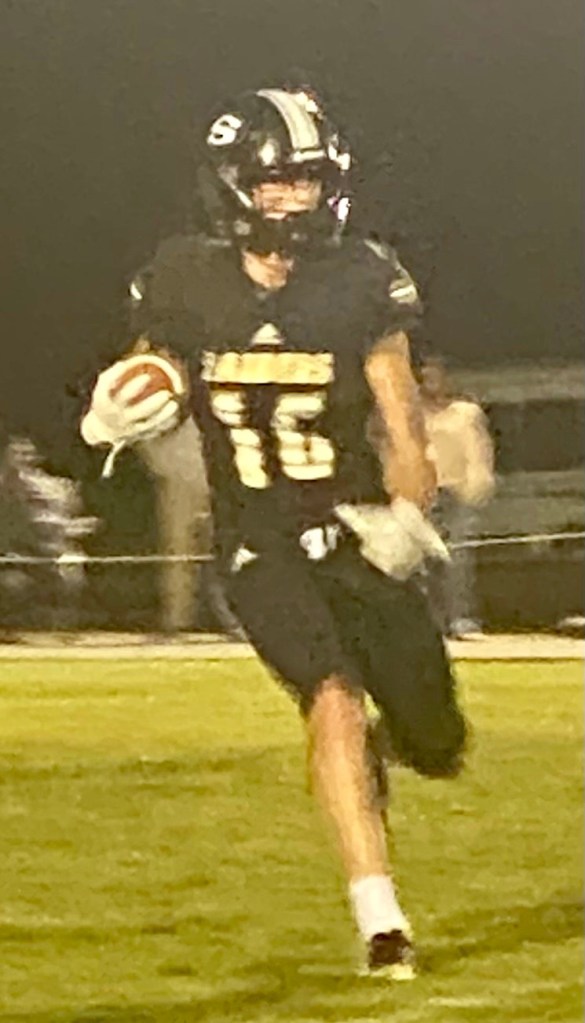 Southland Academy junior running back Trey Sellers (#16) rushed for 176 yards on 23 carries and scored two rushing touchdowns to help lead the Raiders to a 35-26 win over Tiftarea Academy and an end to their four-game losing streak. ATR Archive

CHULA, GA – There we’re some tense moments late for the Southland Academy Raiders (SAR) in their game against the Panthers of Tiftarea Academy Friday night. However, the Raiders were able to hang on and snap their four-game losing streak with a 35-26 win over the Panthers at Tiftaeea Academy in Chula, GA.

The win puts SAR at 4-5 overall on the season and they claimed their first GIAA Region 3-AAA victory. As for TA, they fall to 1-8 on the season, but are also 1-3 in region play. However, at the moment, the Raiders own the tiebreaker, having beaten the Panthers head to head.

The Raiders’ ground game was in high gear in this contest as they amassed a total of 304 yards on 49 carries between six different running backs. Trey Sellers got the bulk of the workload as he rushed for 176 yards on 23 carries and scored two rushing touchdowns. Will Rhodes also had a productive ground game as he toted the rock for 122 yards on four carries and scored two touchdowns.
SAR quarterback Chase Ledger only completed three of nine passes for 71 yards, but rushed for 56 yards on 10 carries and scored a rushing touchdown.
The Raiders drew first blood with 7:41 to go in the first quarter by completing a five-play, 56-yard scoring drive with a three-yard rushing touchdown from Sellers. The extra point by Henry Johnson was good and the Raiders had a 7-0 lead.
However, the Panthers responded when quarterback J.R. Walker led TA on a scoring drive that resulted in a 35-yard touchdown pass to John Jackson. The Panthers decided to go for two and succeeded, taking an 8-7 lead with 5:45 to go in the first quarter.
The Raiders countered when Ledger led them on a nine-play, 59-yard scoring drive and capped it off with a three-yard rushing touchdown. Johnson’s extra point was good and SAR had a 14-8 lead with 59 seconds left before halftime.
However, the Panthers quickly struck back as Walker led the TA offense on a scoring drive that resulted in his second touchdown pass to Jackson. The Raiders blocked the extra point attempt, but the score was tied at 14-14 at halftime.
SAR regained the lead with a little over seven minutes left in the third quarter when Ledger led the Raiders on a nine-play, 70-yard scoring drive that was capped off by a 31-yard rushing touchdown by Will Rhodes. SAR went for two and failed, but they had a 20-14 lead.
About two minutes later, SAR doubled its lead when Sellers broke through the TA defense and ran 61 yards for a touchdown. This time, the two-point conversion succeeded and the Raiders had a 28-14 lead.
The Panthers wouldn’t go away though, as Walker threw a 96-yard touchdown pass to John Michael White. The two-point conversion attempt failed, but the Panthers were within one score, trailing 28-20 with 4:26 to go in the game.
However, the Raiders got the insurance touchdown they needed when Rhodes scored his second touchdown of the night on a 74-yard run from scrimmage. Johnson’s extra point was good and the Raiders led 35-20.
TA would make last ditch effort to get back in the game and they did so by forcing a turnover on a fumble recovery and getting a one-yard rushing touchdown from Walker with 31 seconds to go. Fortunately for the Raiders, the Panthers’ two-point try failed and SAR held on for the 35-26 victory.
The Raiders will close out the regular season when they host Deerfield-Windsor on Friday, November 4 at 7:30 p.m.