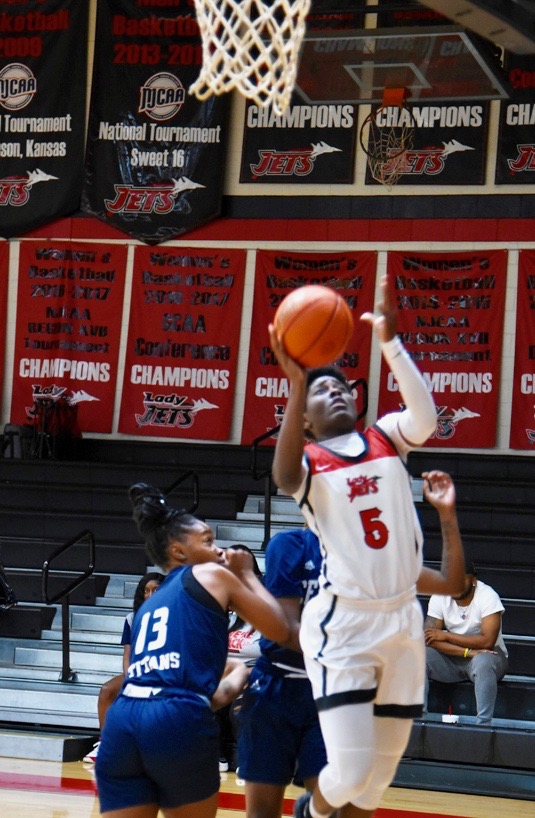 Alexia Dizeko (#5) is shown going up for a layup. She led the Lady Jets with 17 points against Central Georgia Tech. Photo by SGTC Athletics

“It is always good to get a conference win,” said South Georgia Technical College Athletic Director and Lady Jets head coach James Frey.  “We didn’t play as well as I had hoped but I did see some good things and some things that we need to work on.  We are improving every time we take the court.”

South Georgia Tech jumped out to a 17 – 0 lead against Central Georgia Tech and the Lady Titans finally got on the scoreboard with a field goal with 1:40 minutes left in the first quarter. The Lady Jets were up 20 – 4 after 10 minutes of play and expanded that lead to 39 – 14 at the end of the first half.

South Georgia Tech dominated from the first buzzer to the final buzzer and was actually up by 51 points before finally capturing the 80 – 30 conference decision.

Sophomore guard Alexia Dizeko from Sion, Switzerland, led the Lady Jets in scoring with 17 points.  She was six of 10 from the field, had one three-point attempt and hit four of five foul shots.  She also had three rebounds, and one assist.

Freshman guard Veronika Palfi from Pecs, Hungary, was the only other Lady Jet in double-digits.  She came off the bench to score 15 points.  Sophomore guard Luana Leite accounted for nine points and five rebounds and then sophomore forward Susana Yepes, freshman guard Vera Gunaydin, and sophomore center Fanta Gassama followed up with eight points each.  Gassama pulled down 16 rebounds and Yepes had eight rebounds and five assists.

The Lady Jets will go after their second GCAA victory when they host Andrew College on Saturday, November 12th at 1 p.m.   Andrew’s Lady Tigers are 1 – 1 on the season and this is their first conference match-up.

The Jets will also be playing at home this weekend in the Jets Classic.  The 25th nationally ranked Jets will host 20th seeded Eastern Florida at 7 p.m. Friday, November 11th. Chattahoochee Valley and East Georgia will match-up at 5:30 p.m. on Friday.

The Jets Classic games will begin on Saturday after the Lady Jets – Andrew College match-up.  Eastern Florida will take on East Georgia at 3:30 p.m. on Saturday, November 12th and then the Jets will face Chattahoochee Valley at 5:30 p.m.