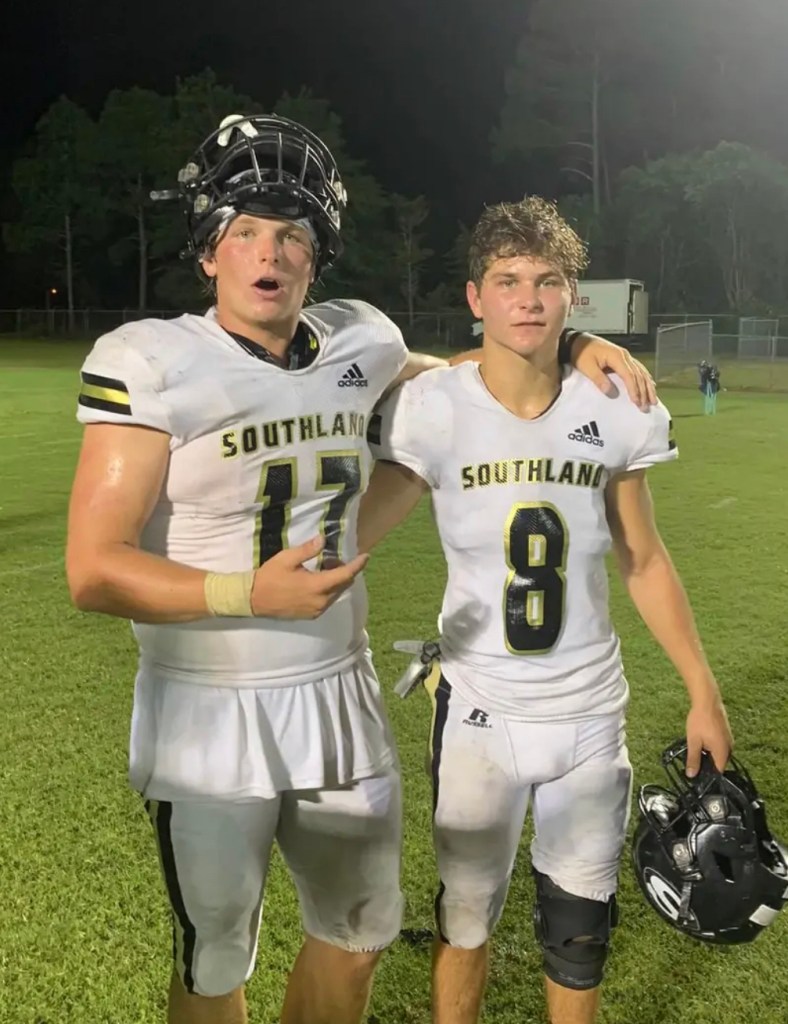 Southland Academy senior quarterback Chase Ledger (left) and senior running back Keaton Griffin (right) pose for a picture after a game earlier this season. Ledger completed six of 11 passes and scored one rushing touchdown in the Raiders’ 44-14 loss to Pinewood Christian School in the first round of the GIAA Class AAA State Playoffs. ATR Archive

BELLVILLE, GA – Having qualified for the GIAA Class AAA State Playoffs by virtue of winning a tiebreaker in spite of a 25-16 loss to Deerfield-Windsor in the regular season finale, the Southland Academy Football Team (SAR) made the 200-mile journey east to Bellville, GA on Friday to take on the Patriots of Pinewood Christian School (PCS) in the first round of the state playoffs. SAR was hoping to pull off an upset over one of the top teams in the GIAA Class AAA division, but the Raiders were unable to stop the PCS offense and ended up losing to the Patriots 44-14 on Friday, November 11 at the PCS football stadium.

This was a game in which the Raiders fell behind early in the first half and could not catch up the rest of the way. This was also a game in which SAR not only struggled to stop the PCS offense, but also made it even more difficult for themselves by committing a total of 10 penalties for 70 yards. In contrast, the Patriots were able to play a penalty free game.

On offense, the Raiders had a strong ground game as they rushed for a total of 202 yards on 37 carries. Running back Trey Sellars led the way with 86 yards on 11 carries and both quarterback Chase Ledger and running back Will Rhodes each scored a rushing touchdown.

Ledger completed six of 11 passes for 44 yards, but his PCS counterpart, quarterback Banks Booth, completed 18 of 23 passes for 375 yards and six touchdowns.

In total, PCS amassed 455 yards on offense, while the Raiders amassed 246 yards, with most of it being on the ground.

The Patriots scored their first touchdown with 11:09 to go in the first quarter when Booth connected with Walker Todd for a 28-yard touchdown pass. PCS decided to go for two and succeeded to take an 8-0 lead.

Then with 6:28 to go in the first quarter, Booth struck again by completing a 54-yard touchdown pass to Todd. Once again, the Patriots went for two and succeeded, taking a 16-0 lead by the end of the quarter.

PCS added to its lead with 4:50 to go before halftime when Booth connected with Todd for the third time of the night on a nine-yard touchdown pass. The PAT was no good, but the Raiders found themselves trailing 22-0.

The Raiders were able to respond, however. On their next offensive possession, Will Rhodes broke through the PCS defense and scampered 25 yards for a touchdown with 3:01 to go before halftime. The two-point conversion attempt failed, but SAR was on the board trailing 22-6 at the half.

Unfortunately for the Raiders, the halftime break could not stop the momentum of the Patriots. With 6:45 to go in the third quarter, Booth was able to find Kaedan Arnold for a 31-yard touchdown pass. The two-point conversion attempt was good and the Raiders found themselves trailing 30-6. Then with 36 seconds left in the third quarter, PCS increased its lead when Booth connected with Ben Swindell for his fifth touchdown pass of the night. The extra point attempt was no good, but the Patriots were firmly in command with a 36-6 lead.

Then with 52 seconds to go in the game, the Patriots scored their final touchdown of the night when Booth found Jake Rogers for his sixth touchdown pass of the night. The two-point attempt was good and the Patriots led 44-6, as the game was about to end.

However, as difficult as the situation was for the Raiders on this night, they quite literally played to the final whistle and it paid off. With less than a minute to play, SAR mounted a scoring drive that was capped off with a two-yard rushing touchdown by Ledger as time ran off the clock. The Raiders decided to go for two and succeeded, making the final score 44-14 in favor of PCS.