Raynor pours in 23 to lead Hurricanes past Life University 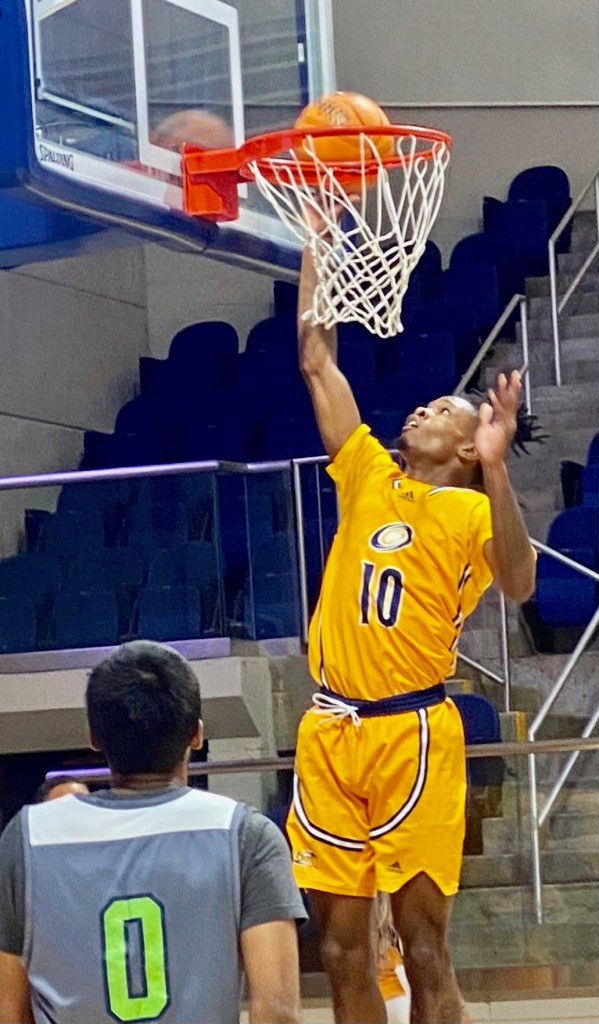 GSW sophomore forward Reggie Raynor scored 23 points on 11 of 15 shooting to help lead the Hurricanes to a 72-58 victory over Life University. Photo by Ken Gustafson

AMERICUS – GSW sophomore forward Reggie Raynor is one of 12 new faces on this year’s Georgia Southwestern men’s basketball team. In the Hurricanes’ home opener against Life University (LU) at the Storm Dome Monday night, the UNC Greensboro transfer introduced himself to the crowd, his teammates and coaches and to the LU Running Eagles by pouring in 23 points to lead GSW to a 72-58 victory.

“We are 12 new guys and we are learning,” GSW Head Coach Aaron Coombs said. “It’s going to be an up and down, sweet and painful process at the same time. I’ve said all along that this could be the best defensive team that I’ve had.” 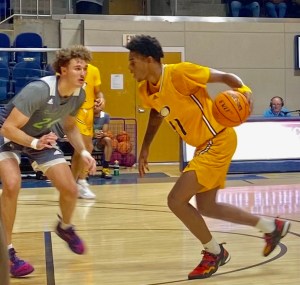 Based on how the Hurricanes performed defensively in this game, Coombs’ assessment of his club’s defensive potential could be realized this year, as the Hurricanes forced the Running Eagles into committing 27 turnovers.

The Hurricanes jumped 0ut to a 13-2 lead early in the first half by using their high-pressure defense to force turnovers and turning those turnovers into points. Over the next few minutes, GSW continued to dominate and expanded its lead to 21-4 before the Running Eagles made a short 5-1 run to cut the Hurricanes’ lead to 22-9.

However, over the next several minutes of the first half, LU went on a 10-2 run before Higgs scored to put GSW up 26-19 with a little less than six minutes to play before halftime.

Over the remaining five and a half minutes, both teams traded baskets, but the Running Eagles pulled to within three at the half when Tylan Green scored on a layup wa few seconds before time expired to end the first half. 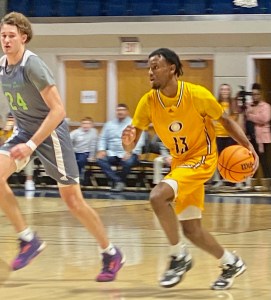 Raynor led the Hurricanes in the first half with 11 points and Higgs chipped in nine first half points for GSW.

Over the first three minutes of the second half, the Hurricanes went on a 7-2 run that was capped off with a free throw from Clark. However, the Running Eagles had an answer, as they went on a run of their own to cut the GSW lead to 41-37 before timeout was called with 15:27 left to play.

Out of the timeout, the Hurricanes got a boost of energy when Lars Nilsen got a steal and a basket on a fast break layup, but LU struck back when Ben Underwood drilled a three-pointer to put the Running Eagles within three at 43-40.

Over the next minute or so, both teams traded baskets, but the Hurricanes were struggling with turnovers and it prompted Coombs to call a timeout with 11:53 left. At this point, GSW only had a 45-44 lead. 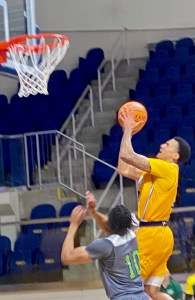 Out of the timeout, Clark was able to beat the LU press and took the ball coast to coast for a layup, but the Running Eagles tied the game at 47-47 on another three-pointer by Underwood. Having led the entire way until this point, the Hurricanes were in a battle to earn their first win of the season.

Shortly thereafter, LU took its first lead of the game when Joshua Ward was fouled in the act of shooting and made both free throws, but the Hurricanes would later regain a 53-51 lead on a basket by Raynor around the nine minute mark.

Over the next couple of minutes, the Hurricanes were able to extend their lead to 57-52 on a fast break dunk by Raynor, but after the media timeout at the 7:01 mark, the Running Eagles kept themselves in it as Jacob Rose got a steal and a basket on a reverse layup. With a little less than six minutes to play, the Hurricanes had a 57-54 lead. 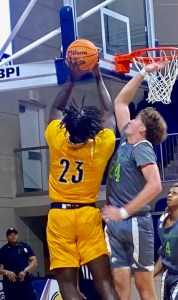 Over the next minute, the Hurricanes would expand their lead to 61-54. Then with 4:13 left, GSW pushed its lead to nine points when Raynor came up with a steal and another fast break dunk, prompting a timeout by the Running Eagles with a little over four minutes remaining.

However, from that point on, GSW would regain control and would close out the game on an 11-4 run to take a 72-58 victory. Both Tylan Green and Nathan Presnell each led the Running Eagles with 10 points in the losing cause.