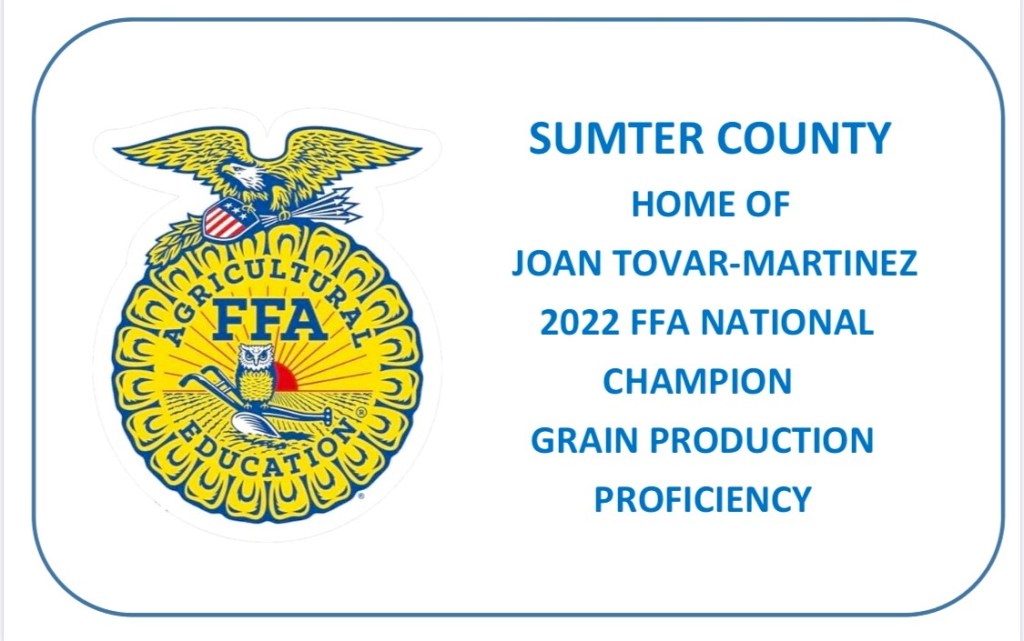 This is an example of a sign to honor Sumter County High School and College and Career Academy student Joan Tovar-Martinez for winning a national championship at the Future Farmers of America (FFA) national competition in Indianapolis, IN a few weeks ago. This sign was shown to the BOC at its regular meeting on Tuesday by Department of Public Works Director Jim Littlefield. There is a proposal to make an official proclamation and to place these signs at right-of-ways along state highways here in Sumter County honoring Tovar-Martinez for winning the national championship. Photo courtesy of Jim Littlefield

AMERICUS – At its November regular meeting on Tuesday evening, November 15, the Sumter County Board of Commissioners (BOC) got to see an example of an official proclamation sign to honor Joan Tovar-Martinez, the Sumter County High School and College and Career Academy student who recently won a national championship, earning the Grain Production Proficiency Award (GPPA) at a Future Farmers of America (FFA) national competition in Indianapolis.

All of the commissioners were present in the room except for Board Chairman Mark Waddell, who participated in the meeting via Zoom conference call.

Sumter County Department of Public Works Director Jim Littlefield showed the BOC an example of what the official proclamation road sign might look like and mentioned that multiple signs would be placed along the state highways that go through town. Littlefield added that being that the county has no control over the right-of-ways along state highways, he reached out to the Georgia Department of Transportation (GDOT) concerning the matter and got a favorable response. Littlefield also told the BOC that the GDOT responded to him in an email that it could make the signs and would need to know which state routes the county would want the signs to be placed and that they would send a crew down to install the posts and the signs, making them 18 inches by 24 inches. The example of the sign shown to the BOC was 11×17, but Littlefield stated that the actual signs to be placed along the state highways at the right-of-ways would be bigger than that.

Littlefield also added that he reached out to a gentleman at a company called Industry Visuals and was told that for 10 aluminum signs that would go on a post, they would charge approximately $298.00 total for all 10 signs. Littlefield also told the BOC that at all highways coming into the city of Americus, with the exception of two of them, there are two signs on a pole honoring the 2016 and 2020 Sumter County High School girls’ state championship basketball teams. “It could be mounted on those poles, but I was surprised that they are not at where you come into the county,” Littlefield told the BOC. “All of the signs they put up are basically at the city limit boundary.”

Littlefield went on to say that he would forward all of the information about the signs, the sign layout and what the GDOT has offered to do in regards to installing the signs to the Sumter County School Board.

In other news from the BOC’s regular meeting, Sumter County Parks and Recreation Director Tim Estes told the BOC that his department was recently awarded the Georgia Recreation and Parks Association (GRPA) District 3 Agency of the Year at a banquet in Columbus. “We’re proud of that. That’s the second time in four years that we’ve been named the District Agency of the Year,” Estes stated.

He went on to say that the SCPRD’s basketball goal project at The Columns at Boone Park is complete and works well, even though it was completed five months later than he thought it would be. “We had $80,000.00 allocated to this project,” Estes told the BOC. “Because we use that Gordian system, which is called EZIQC, where when we develop a scope of work, we give that scope of work to Gordian, which is basically a software company. They plug it in and it reads out the state contract for every single piece of that project. At that point, they bid it out for us so we don’t have to write specs.” Estes went on to say that he and his staff thought the project would cost $80,000.00, but it ended up costing them $54,000.00. “We were able to use some local contractors on that,” Estes said. “Naturally, we had to purchase the equipment from somewhere in Atlanta, but we had a local electrician. They got the electrical part of that job here and a construction guy that did some rental stuff with us.”

Estes went on to say that the company that provided those basketball goals is the same company that provided the plastic, retractable bleachers in the gymnasium at Boone Park. “Over the last 10 years, we had had, I guess, seven or eight of those plastic seats break,” Estes told the BOC. “We would replace them, but naturally, we don’t install them as well as the certified installer does.” Estes went on to say that because he and his staff had to wait so long, they were given seven new seats and they were installed for free. He also added that the SCPRD got three wall pads out of the deal and estimates that as a result, the SCPRD got about $2,000.00 worth of free stuff.

Estes continued his report by telling the BOC that he is finishing up the Grant on Improving Neighborhoods in Disproportioned Areas. He stated that he thought he was a lot closer to being finished with his report, but added that according to the River Valley Regional Commission, he is not as close to finishing all of the requirements like he thought he was, but stated that he plans to finish it on Thursday, seeing that it is due on Friday, November 18. “ We will be asking for approximately $1.3 million dollars that will be earmarked specifically for playgrounds, but would also include a few things like an upgraded camera system at Boone Park, some resurfacing and some new surfacing of a walking track there and some removal of trees,” Estes told the BOC.

The BOC also voted unanimously to move forward with a Request For Proposal (RFP) from Sumter County Fire and Rescue to approve a roof replacement for its new fire station. According to Sumter County Fire Chief Jerry Harmon, his department is requesting to have a new roof put on the complex. Commissioner Jesse Smith made a motion for approval and Commissioner Clay Jones seconded the motion. The BOC voted and the motion to approve the RFP passed unanimously. 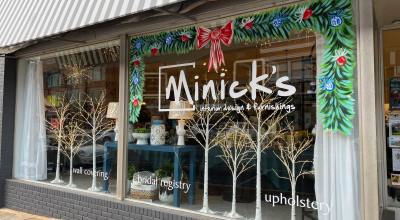