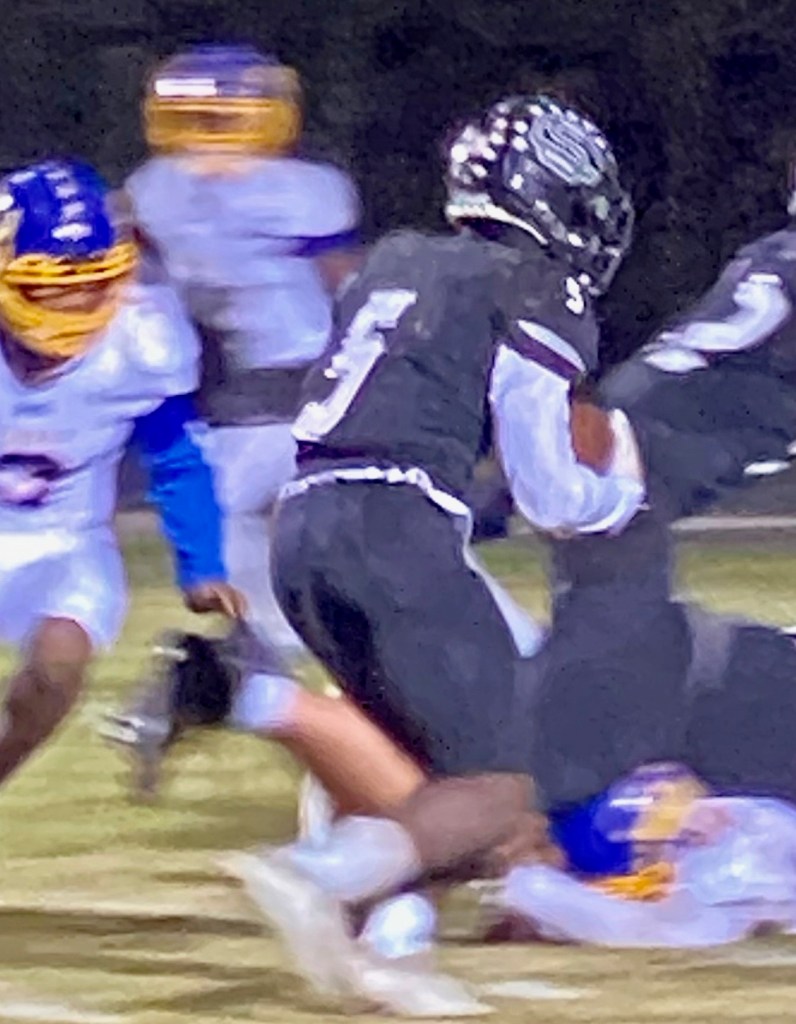 Schley County senior running back Malachi Banks is seen here scoring one of his two rushing touchdowns in Wildcats 58-14 win over Washington-Wilkes in the second round of the state playoffs. Photo by Ken Gustafson

ELLAVILLE, GA – On Friday night, November 18, the fifth-ranked Schley County Wildcats (10-2) once again showed why they are among the top teams in the state in GHSA Class A Division 2. As they did the week before in their win over Georgia Military College, the Wildcats used their talent, speed and athleticism to overwhelm the Washington-Wilkes Tigers (WW) on both sides of the ball. The SCHS defense scored on two pick sixes and forced two fumbles on the night, while the offense scored on almost every possession. As a result, the Wildcats advanced to the state quarterfinals of the GHSA Class A Division 2 State Playoffs with a 58-14 drubbing of WW at Wildcat Stadium.

As a result of their victory, the Wildcats have now reached territory they haven’t been in since the 2018 season when the 9-3 Wildcats reached the Elite 8 before losing to their region archrivals Marion County 34-27 the day after Thanksgiving.

“I thought we played a complete game. We executed our game plan,” SCHS Head Coach Darren Alford said. “Coaches did a great job on Sunday putting our game plan together and we came out. We practiced it and it worked this week. It was one of those weeks where the things that you try to do happen. I’m just excited about the way our kids are playing and how our coaches are coaching. Our community is excited about what’s going on. It’s a blessing right now to be here.” 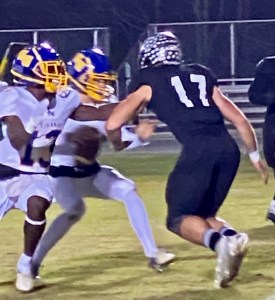 Schley County senior outside linebacker Luke Forehand (#17) forced one fumble and recovered another one in the Wildcats’ playoff win over the Tigers.
Photo by Ken Gustafson

The Tigers won the toss and elected to receive, but as it did throughout the night and throughout the season, the Wildcat defense stifled the WW offense on its first possession and gave the SCHS offense a chance to go to work right away, which it did.

On second down and 15 from the SCHS 42-yard line, quarterback Jay Kanazawa threw a 58-yard touchdown pass to Kendall Sims. The extra point by Miguel Yanez-Rueda was good and SCHS had a 7-0 lead with 8:09 to go in the first quarter.

The Tigers were able to move the ball down inside the SCHS 20 on their next possession, but on third down, SCHS linebacker Luke Forehand forced a fumble that was nearly recovered by the Wildcats. This forced WW to attempt a 35-yard field goal, but Emiliano Aburto’s attempt fell short and the score remained 7-0 in favor of SCHS.

The Wildcats would shortly thereafter mount another drive that went down inside the WW 10-yard line, but the drive bogged down in part due to a false start penalty. Nevertheless, SCHS came away with points when Yanez-Rueda’s 26-yard field goal attempt was good and the Wildcats had a 10-0 lead with 45.3 seconds left in the first quarter. 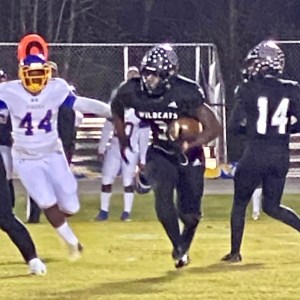 Schley County sophomore running back Zayden Walker scored one rushing touchdown and scored another on a pick six in the Wildcats’ 58-14 rout of Washington-Wilkes.
Photo by Ken Gustafson

In the second quarter, the SCHS defense once again came up with a big play by forcing a fumble that was recovered by Jack Clark. Clark then ran the ball down to the WW five-yard line and highly-touted running back Zayden Walker ran behind the blocking of the SCHS offensive line and scored a three-yard rushing touchdown on the Wildcats’ first play from scrimmage. Yanez-Rueda’s extra point attempt was no good, but SCHS was firmly in command with a 16-0 lead.

The SCHS defense once again stopped WW on offense and got the ball back. Once again, the Wildcats’ offense put points on the board when Kanazawa found four-star wide receiver JaLewis Solomon on a 24-yard touchdown pass. The extra point by Yanez-Rueda was good and SCHS led 23-0 with 8:27 to go before halftime.

Not long thereafter, the Wildcats were able to add to their lead when the defense made another big play. The Tigers were trying to mount a scoring drive on their next possession, but quarterback Andrew Meech’s pass was picked off by Walker and taken 62 yards to the house for his second touchdown of the night. Yanez-Rueda’s extra point was good and SCHS led 30-0 with time still to play in the fist half. 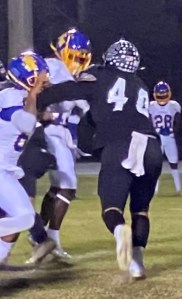 Shortly before halftime, the Wildcats would get the ball back on offense and they would once again score as they moved the ball down inside the WW five-yard line and got a rushing touchdown from running back Malachi Banks. The PAT by Yanez-Rueda was good and SCHS led 37-0.

However, with just 10 seconds left before halftime, the Tigers were able to get on the scoreboard when quarterback Andrew Meech threw a six-yard touchdown pass to Desmond Cofer. The extra point by Aburto was good and the Wildcats went into halftime with a 37-7 lead.

The onslaught continued in the second half as Kanazawa completed a short pass to Carson Westbrook, who ran the ball down the sidelines for another SCHS touchdown. The extra point by Yanez-Rueda was good and the Wildcats increased their lead to 44-7.

On their next possession, the Tigers were able to move the ball down inside the SCHS 10-yard line, but they fumbled the ball and Luke Forehand recovered it for the Wildcats at the SCHS 10. 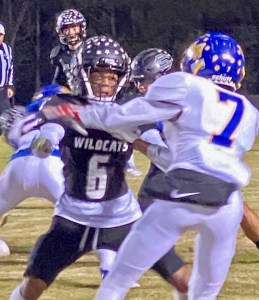 The SCHS offense immediately took advantage of the turnover and ran the ball all the way to the opposite end zone. SCHS used the potent running attack of Walker and Banks during the entire drive and finished it with a two-yard rushing touchdown from Banks, his second of the night. The extra point by Yanez-Rueda was good and SCHS had a 51-7 lead.

However, the Wildcats still weren’t done. The Tigers had the ball on second and 10 near their own 30-yard line when Meech was picked off again; this time by Jack Clark. Clark took the ball 34 yards for another SCHS pick six and after Yanez-Rueda’s extra point, the Wildcats were up 58-7 with about four minutes still to play in the third quarter.

WW was able to mount a scoring drive in the fourth quarter that resulted in a three-yard rushing touchdown by Calvin Blackburn. However, the outcome of the game had long been decided before then and the Wildcats would move on to the state quarterfinals with a 58-14 victory. 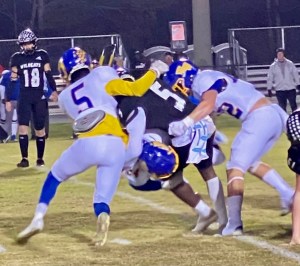 Schley County senior running back Malachi Banks carries WW tacklers as he fights for yardage on the ground.
Photo by Ken Gustafson

As was the case a week ago against Georgia Military College, the big lead afforded SCHS the luxury of giving its younger players some valuable playing time. On the defensive side of the ball, inside linebacker Hank Arrington came up with a tackle, while wide receiver Jordan Hudson caught a pass for the SCHS offense. Jonathan Leggett was also in on a couple of tackles for the Wildcats.

In the waning seconds of the game, the Tigers had the ball near the SCHS 10-yard line, but the Wildcat defense stopped WW on all four downs to end the game. Washington-Wilkes finishes its season with a record of 8-4. 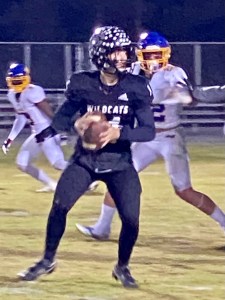