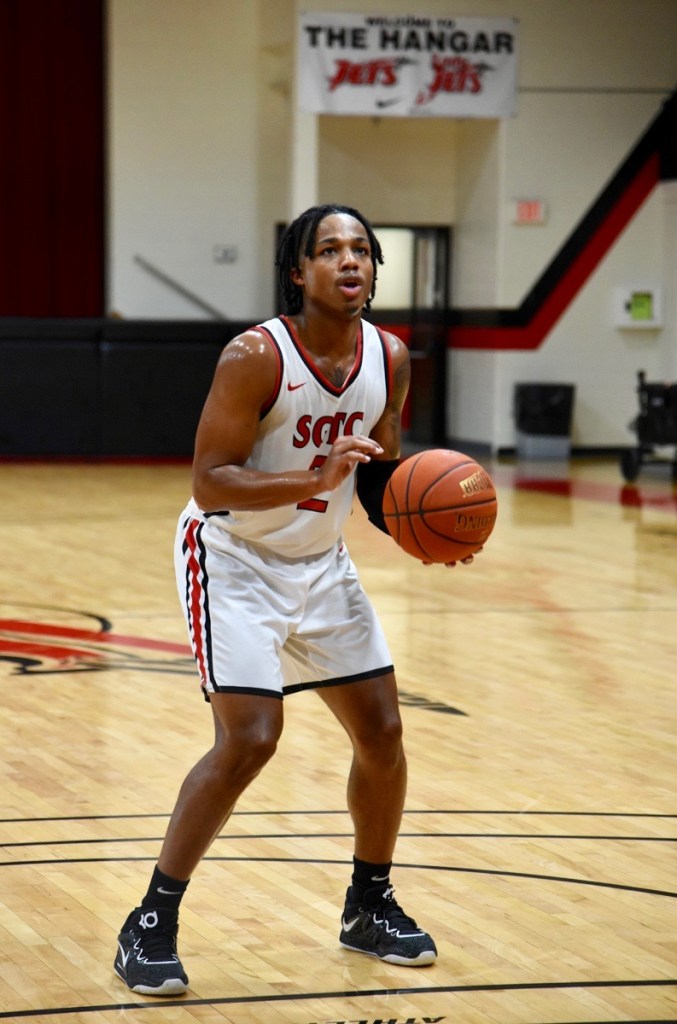 Semaj Henderson (#2) led the Jets in scoring against the 4th ranked Chipola College group. He had 19 points. Photo by SGTC Athletics

LAKELAND, FL – The South Georgia Technical College Jets managed to pull to 3 – 3 on the season with an 89 – 79 victory over Florida Gateway College in Lakeland, Florida recently.  That win came after the Jets dropped an 85 – 57 decision to Chipola College in Marianna, FL earlier in the week.

Chipola is currently ranked 4th in the National Junior College Athletic Association Division I men’s basketball poll and former SGTC assistant coach Jaren Harris is now a member of their coaching staff.  Chipola used a balance scoring attack to jump out to a 41 – 27 lead at the end of the first half.  They continued to stretch that lead in the second half by outscoring the Jets 44 – 30 to capture the 85 – 57 victory.

Sophomore Guard Semaj Henderson led the Jets in scoring with 19 points, six rebounds, five assists, and two steals.  Nathan Wilson was the only other Jet to break into double-digits in that game with 11 points, eight rebounds, one assist, and two blocked shots.

Chipola had five players in double-digits in that game with Deyton Albury leading the way with 15 points.  JC Curry came off the bench to add 12 pints, Derrick Butler had 11 and then Jamil Safieddine and Jerald Colonel scored 10 each.

Sophomore Bryce Turner did toss in nine points for the Jets and then Aaron Pitts walked away with eight points.  The remainder of the scoring for the Jets came from Kallin Fonesca with five, Deonte Williams, 3, and Ryan Djoussa, 2.

The Jets will have the opportunity to match-up against Chipola College again at home on November 29th at 7:30 p.m. in the Hangar.   SGTC is hosting “Light Up Your Future” from 6 p.m. – 8 p.m. on November 29th with the basketball game following that event.