Defense gets it done in Lady Raiders’ win over Lakeside Academy 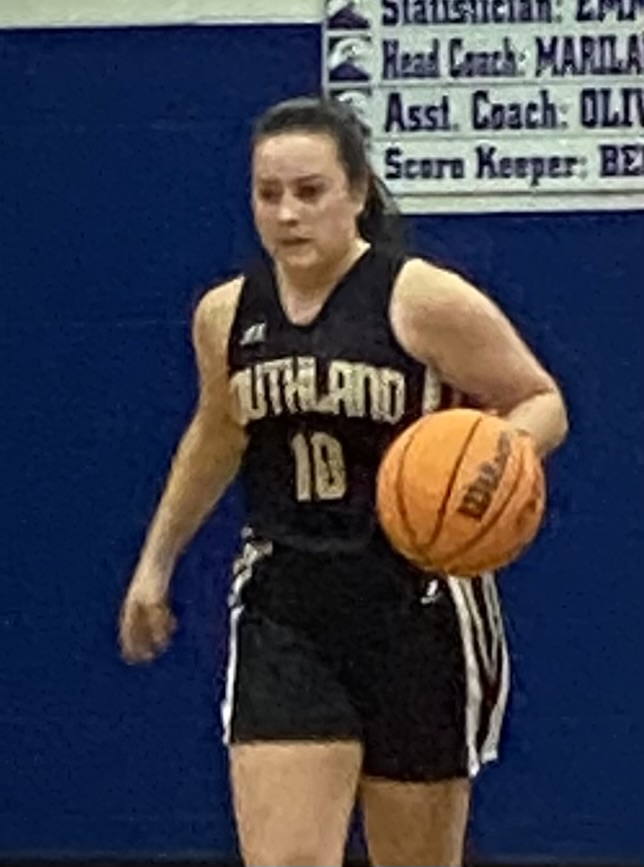 Southland Academy senior point guard Morgan Weaver led the Lady all scorers with 14 points and knocked down four three-pointers in the Lady Raiders’ 49-32 victory over Lakeside Academy (AL) in their second game of the Terrell Tip-Off Tournament at Terrell Academy. Photo by Ken Gustafson

DAWSON, GA – After drubbing SOWEGA STEM by the score of 66-5 on Monday, the Southland Academy Lady Raiders (SAR) came back on Tuesday, November 22 to face the Lady Chiefs of Lakeside Academy (LKS) from Eufala, AL in their second game of the Terrell Tip-Off Tournament at Terrell Academy. Though the Lady Chiefs were a stronger opponent than the team SAR faced the day before, the Lady Raiders, particularly in the second half, were able to use their tenacious defense to limit the LKS offense. On the offensive end, SAR went on a 15-4 run in the third quarter and continued to dominate the rest of the way. As a result, the Lady Raiders tasted their second victory of the season: a 49-32 win over LKS.

“As always, it starts with our defense,” SAR Head Coach Eric Israel said. “Our defense was really, really good for most of the game tonight. It kept us in the game. It kept us in the game and then we started hitting some shots there in the second half and we kind of blew it open a little bit. I’m just super proud of the girls. It was just an unbelievable effort by our girls tonight.” 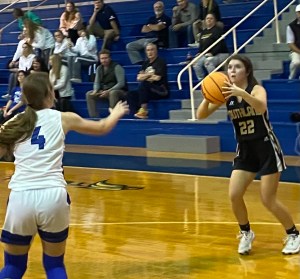 In addition to their strong defensive effort, the Lady Raiders also got it done offensively, particularly from the outside. Senior point guard Morgan Weaver led all scorers with 14 points and hit four three-pointers on the day. Senior guard J.C. Bailey also had a good shooting night as she scored 10 points and drained two shots from beyond the arc. Senior guard Riley Mitchell contributed nine points, including a three-pointer and junior forward Mary Beth Easterlin chipped in eight points, including two three-pointers. As a team, the Lady Raiders drained a total of nine three-pointers on the day.

After a tightly contested, low-scoring first half, the Lady Raiders had a 20-18 lead at halftime. After scoring 18 points in the first quarter, mostly on the strength of four three-pointers, SAR struggled offensively in the second quarter and only scored two points on a basket from Riley Mitchell.

However, the Lady Raiders jumped out to a 25-18 lead early in the third quarter on a jumper from J.C. Bailey and a three-pointer from Weaver, her second of the game. This jump-started the SAR offense and they were able to extend their lead to 30-18 by the 1:18 mark of the third quarter.

During the remaining minute of the quarter, LKS implemented a full-court press, but the Lady Raiders were able to break it and got a layup from Anslee Rooks. Then as the seconds were winding down to end the third quarter, Weaver drained her third three-pointer of the game at the horn to give SAR a 35-22 lead with one more quarter to play. 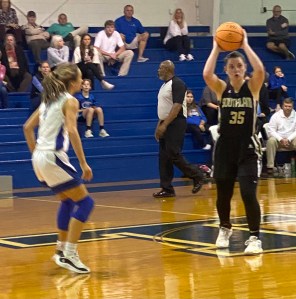 Over the final eight minutes, the Lady Raiders continued to play solid half court defense and continued to limit the Lady Chiefs’ ability to score. Then with a little over five minutes remaining, Weaver drained her fourth three-pointer of the game to put SAR up 40-24. From that point until the end of the game, SAR continued to execute at both ends of the floor and would go on to defeat the Lady Chiefs 49–32 for their second win of the season.