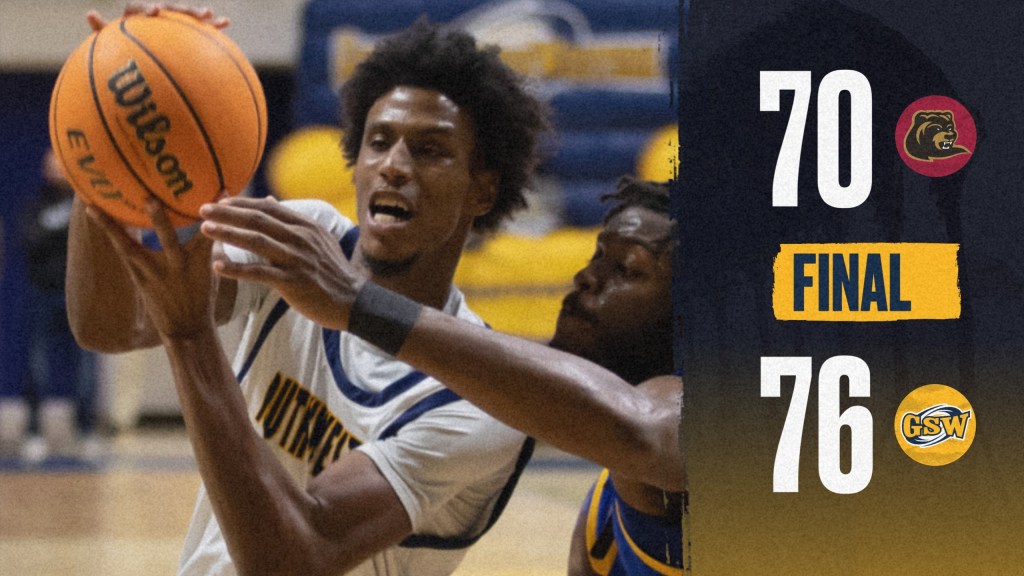 AMERICUS – The Georgia Southwestern State University men’s basketball team (GSW) earned a two-game sweep during the Thanksgiving week by edging out Clinton College 76-70 at the Storm Dome on Monday and earning a decisive 78-57 victory over their fellow Peach Belt Conference opponents, the Golden Rams of Albany State on Tuesday to earn their forth straight victory and a 4-1 overall record.

On Monday, November 21, the Hurricanes took on Clinton College, a non-NCAA school from Rock Hill, SC and a member of the National Christian College Athletic Association (NCCAA). Though they aren’t an NCAA member team, the Golden Bears gave the Hurricanes everything they could handle. Nevertheless, thanks to high scoring sophomores Jarrett Adderton (20 points) and Reggie Raynor (15 points), along with a GSW record setting seven blocks by junior forward Jerroda Briscoe, the Hurricanes were able to edge out the Golden Bears 76-70 to win their third straight game of the season. 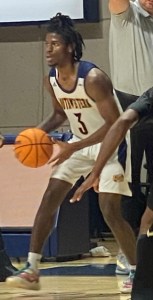 GSW sophomore guard Jarrett Adderton scored 20 points to lead the Hurricanes to a 76-70 victory over Clinton College and scored 28 points on 11-14 shooting in GSW’s victory over Albany State.
Photo by Ken Gustafson

After a tightly contested first half between both teams, the Hurricanes went into halftime with a 39-36 lead, but for much of the second half, the Golden Bears stayed within striking distance and took a 60-59 lead on a slam dunk by Cameron Shannon with 8:40 to go.

Over the next few minutes, the game was still a back-and-forth affair, with GSW only leading by as much as four points. However, with 3:56 to go in the contest, Adderton knocked down a jump shot to give GSW a 69-65 lead. From that point on, GSW was able to hold off the Golden Bears and went on to earn a 76-70 victory. 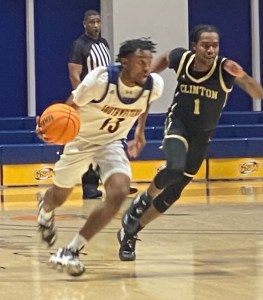 The next day, the Hurricanes made the journey down U.S. Highway 19 to take on the winless Golden Rams of Albany State (ASU). GSW got off to a strong start in the first half due to hot shooting from the field and a strong defensive effort. This continued for much of the second half and it resulted in a 78-57 victory for the Hurricanes.

Adderton blistered the net in this game, scoring 28 points on 11-14 shooting and draining five three-pointers. Higgs was also in double figures with 18 points and senior guard Brian Tolefree scored 11. 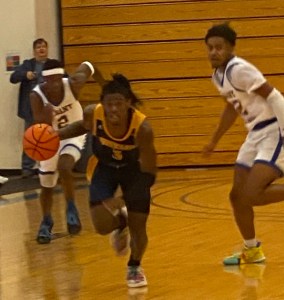 After his 20-point game against Clinton College the night before, GSW sophomore guard Jarrett Adderton peppered the Golden Rams with 28 points on 11-14 shooting and knocked down five three-pointers in the Hurricanes’ 78-57 victory over Albany State.
Photo by Ken Gustafson

During the first three minutes of the second half, GSW’s high-pressure defense disrupted the ASU offense and the Hurricanes were able to capitalize with points at the other end. They went on a 7-0 run that was capped off by a three-pointer from Adderton. This prompted ASU to call a timeout with 17 minutes remaining in the game. 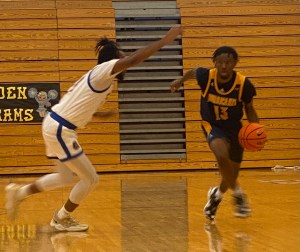 After his 11-point performance against Clinton College the night before, GSW junior guard Jordan Clark scored just three points on a three-pointer and dished out three assists in the Hurricanes’ win over Albany State.
Photo by Ken Gustafson

However, that timeout didn’t stop the Hurricanes. They continued their hot shooting from the field and had a 54-30 lead by the 15:21 mark. For the next few minutes, GSW continued to execute on offense and they continued to limit the Golden Rams’ ability to score with their solid defensive play. This resulted in an 8-4 run by GSW that put them up 62-34 with 11:29 left to play.

Once again, the media timeout at the 11:29 mark didn’t stop the Hurricane Express, as Adderton would hit his fifth three-pointer of the game to give GSW a 65-34 lead. 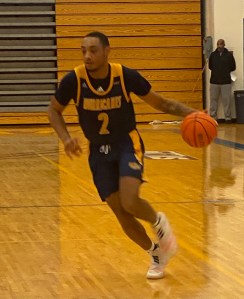 Over the remaining nine minutes of the contest, the Golden Rams outscored the Hurricanes 23-13, but were never able to mount a serious comeback. As a result, the Hurricanes left Albany with their fourth straight win: a 78-57 victory over ASU. 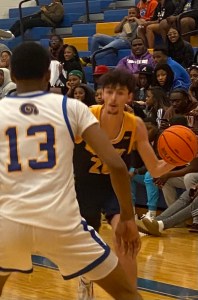 The Hurricanes (4-1) will try for their fifth straight victory when they hit Randolph Barksdale Court at the Storm Dome on Wednesday, November 30 to take on the Saints of Limestone University. Tip-off is scheduled for 7:30 p.m.