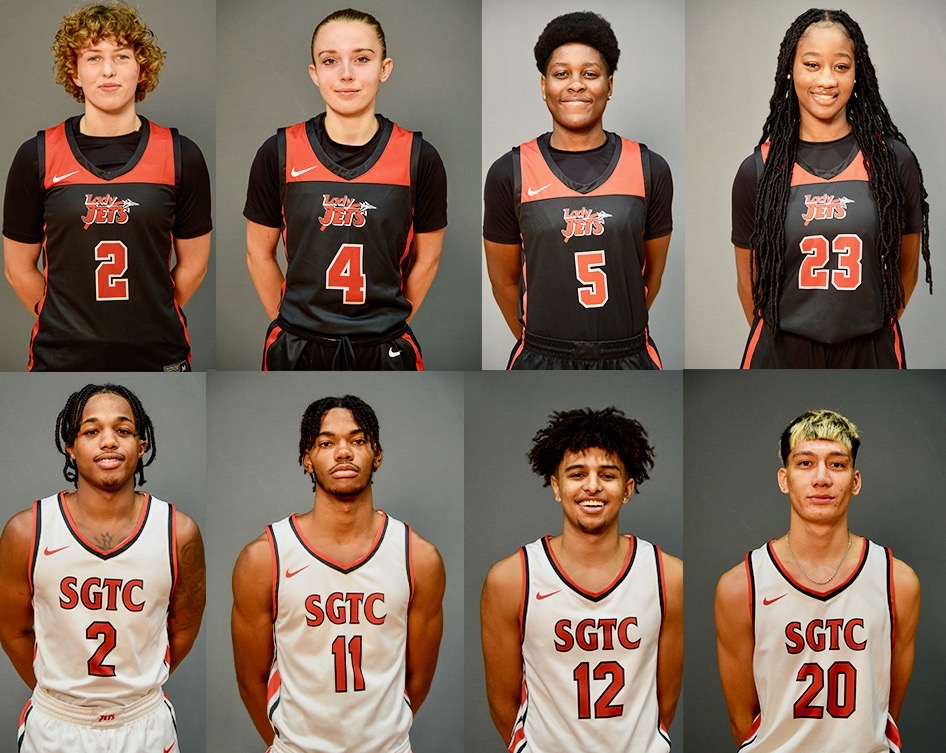 Shown above are the eight Lady Jets and Jets players that are listed nationally for their individual accomplishments this season. Shown on the top row are: Lady Jets Loes Rozing, 2, Veronika Palfi, 4, Alexia Dizeko, 5, and Fanta Gassama, 23. Shown on the bottom row are: Semaj Henderson, 2, Bryce Turner, 11, Deonte Williams, 12, and Nathan Wilson, 20. Photo by SGTC Athletics

AMERICUS – The South Georgia Technical College Lady Jets climbed two spots in the National Junior College Athletic Association’s (NJCAA) Division I women’s basketball poll released earlier this week.  The Lady Jets opened the season at 5th in the nation but a loss to the nationally ranked Gulf Coast Lady Commodores dropped them to 12th.  They moved up to 11th last week and came in at 9th in the nation this week after posting seven consecutive wins.

Trinity Valley is currently ranked first in the nation with a perfect 7 – 0 record.  Northwest Florida State, Blinn, Chipola and New Mexico follow them.  Gulf Coast State is ranked sixth, Jones and Southern Idaho are seventh and eighth.  South Georgia Tech moved to ninth and Moberly Area rounded out the top 10.  South Georgia Tech is the only Georgia college listed in the top 25 teams in the nation.

In addition to moving up in the top 25 national poll, the SGTC Lady Jets also had four players to be recognized for their individual efforts on the court.  The SGTC Jets have dropped out of the national rankings after falling to 3 – 3 on the season, but four of their players are also currently ranked nationally for their skills on the court.

Lady Jets sophomore guard Alexia Dizeko, 5’ 11” from Sion, Switzerland, is currently ranked 31st in the nation in field goal percentage shooting.  She is making 62.7% of her attempted shots and is averaging 14.3 points per game.

The Jets who earned individual honors included sophomore transfer guard from Chicago, IL, Semaj Henderson.  He is currently listed as 18th in the nation in assists per game averaging 5.8.  His teammate, 6’ 8” forward from Auckland, New Zealand, Nathan Wilson is ranked 27th nationally in offensive rebounds per game.  He is averaging 2.8 over five games.  Freshman guard Deonte Williams, 6’ 8” from Sydney, Australia, broke into the national poll in field goal percentage shooting hitting 70% of his attempts.  He is currently 31st in the nation.

Sophomore forward Bryce Turner, 6’ 7” from Jacksonville, FL, also made the national poll.  He is 41st in the nation in rebounds per game with a 9.2 average after five games.  The Jets are 3 – 3 on the season and will take a break until Tuesday, November 29th when they host the 4th seeded Chipola State College Indians at 7:30 p.m. in the Hangar.

Albany Tech will open play at 1 p.m. on Saturday, November 26th against Denmark Tech and then the 9th ranked Lady Jets will take on the 25th nationally ranked Indian River Pioneers at 3 p.m.  The Lady Jets will travel to Chattahoochee Velley Community College on December 5th and then host East Georgia State College on Friday, December 9th at 5:30 p.m. and Albany Tech on Saturday at 1 p.m. on December 10th.