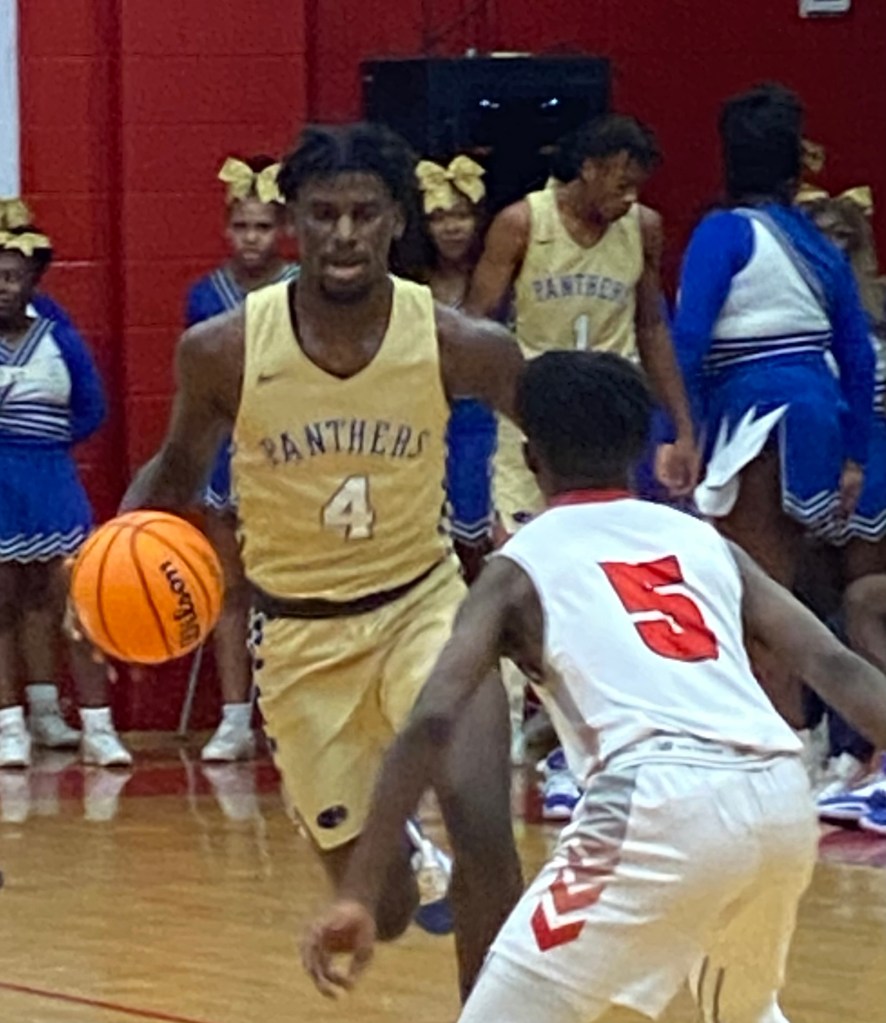 Sumter County senior guard Cameron Evans led the Panthers in scoring with 16 points in their loss at Lee County. Photo by Ken Gustafson

LEESBURG, GA – The Sumter County High School boys basketball team (SCHS) made the 28-mile trip down U.S. Highway 19 to Leesburg expecting to come away with a victory over the Lee County Trojans (LC) in the first of a two-game series between these two regional rivals. However, the solid defense and hot shooting of the Trojans, coupled with turnovers and cold shooting from the field by the Panthers, led to SCHS suffering a 71-53 defeat at the hands of LC on Friday, December 9 at Lee County High School.

With the loss, the Panthers are now 3-2 on the season.

It was a back-and-forth affair between both teams in the first quarter with numerous lead changes, but by the end of the quarter, the score was tied at 15-15. 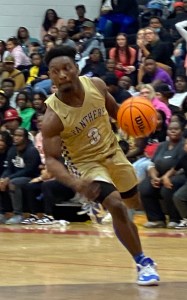 However, the Trojans jumped out to a 19-15 lead early in the second quarter on the strength of a three pointer from Josiah Parker. This prompted SCHS Head Coach Johnny Genwright to call a timeout to get his team to regroup.
However, that timeout did not stop LC, as the Trojans scored four straight points to take a 23-15 lead. SCHS junior shooting guard Anthony Tyson hit a short jumper to bring the Panthers to within six, but the Trojans struck back with a three-pointer from Christian Brown in the corner, pushing the LC lead back up to 26-17.

A few minutes later, a technical foul was called against the Trojans’ Caden King and Jackson, who was fouled on the play by King, made one of his free throws. Tyson was chosen to shoot the technical foul shots, but could only hit one of the free throws and the Panthers still trailed 26-20.

However, LC jumped out to a 29-20 lead on a three-pointer by Harrison Skinner and that was the beginning of a 13-5 run by the Trojans to close out the first half. By halftime, the Panthers trailed 39-25. 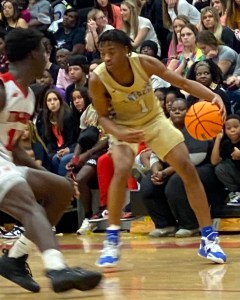 Over the first five minutes of the second half, the Panthers continued to struggle offensively, while the Trojans went on a 6-0 run to take a 45-25 lead. Then with 4:39 left in the third quarter, the Panthers were accessed a technical foul and Braylon Chaney sank both technical foul shots for the Trojans. Making matters worse, LC got the ball out of bounds and they found D.J. Taylor all alone for a wide-open layup. Just like that, the Panthers found themselves trailing 48-25.

During the remainder of the game, SCHS tried to mount a comeback and cut their deficit to 53-35 when Pope got a steal and a basket, electrifying the SCHS supporters who made the trip down U.S. Highway 19. However, the Trojans continued to be disciplined in their man-to-man defense, which made it difficult for the Panthers to cut into LC’s double-digit lead. Though SCHS did try to create turnovers with a full-court press in the fourth quarter, they were not able to make a serious threat to get back in the game and went on to lose to the Trojans by the score of 71-53.

Taylor led the Trojans (4-1) in scoring with 16 points and sophomore Ousmane Kromah scored 11 points for LC in the winning cause.

The Panthers will try to get themselves back into the win column when they travel down to Tifton on Friday, December 16 to take on the Tift County Blue Devils. Tip off is scheduled for 7:30 p.m.