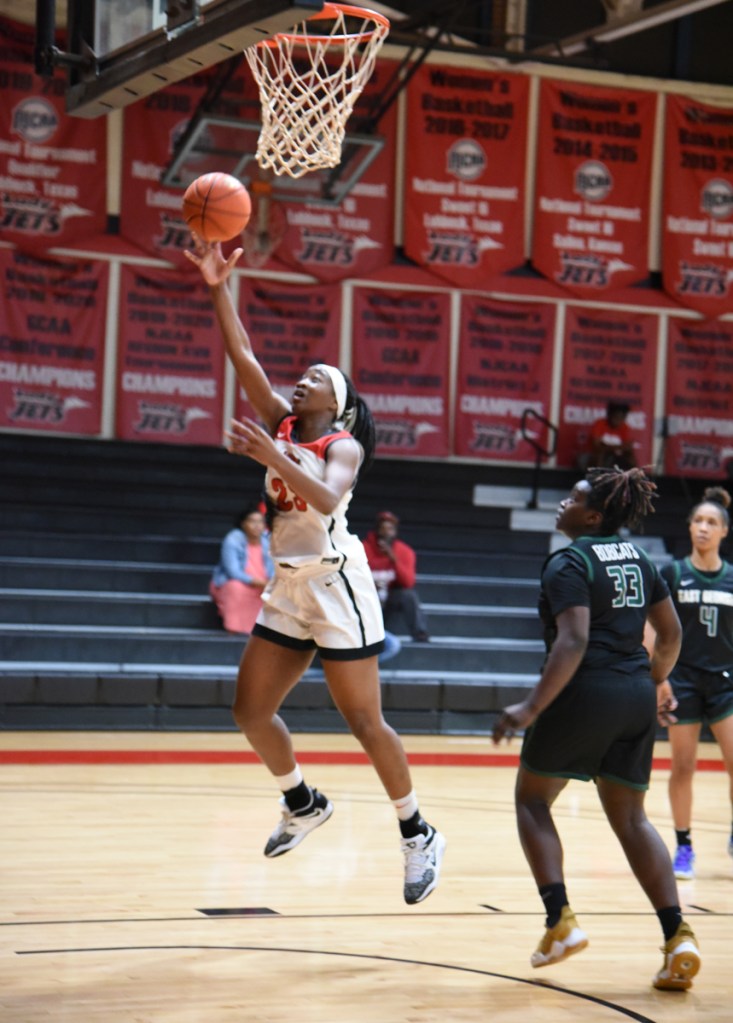 Fanta Gassama, 23, is shown going up for a layup against East Georgia. She had 29 points against the Bobcats. Photo by SGTC Athletics

AMERICUS – The nationally ranked South Georgia Technical College Lady Jets moved to 12 – 1 overall and 5 – 0 in the Georgia Collegiate Athletic Association (GCAA) after securing an 86 – 74 victory over East Georgia State College on Friday and then took a 69 – 38 win over Albany Technical College on Saturday.

Both East Georgia and Albany Tech were undefeated in the conference coming into the match-up against South Georgia Technical College.  East Georgia pulled with-in four points of SGTC midway in the fourth quarter but the Lady Jets were able to pull out the 86 – 74 victory.

Sophomore Center Fanta Gassama had a total of 29 points and 12 rebounds against the East Georgia Lady Bobcats.  She also had three assists, a blocked shot and two steals. Sophomore Luanna Leite, sophomore forward Alexia Dizeko and sophomore Loes Rozing all scored in double digits as well. 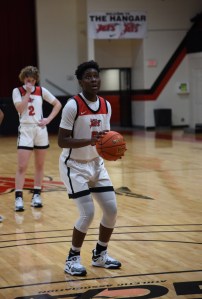 Alexia Dizeko, 5, scored 16 points against Albany Tech and had 17 against East Georgia.
Photo by SGTC Athletics

Laurie Calixte scored five points for the Lady Jets and then Susana Yepes, Mame Thiaw, and Camryn James tossed in two points each.

In the match-up against Albany Tech, the SGTC Lady Jets were up 33 – 19 at the end of the first half and then continued to widen the lead until they had captured the 69 – 38 victory.  Sophomore forward Alexia Dizeko was the top scorer for the Lady Jets with 16 points and Susana Yepes was next with 11 points.

The remainder of the scoring was spread out.  Camryn James and Vera Gunaydin both came away with eight points, Luana Leite and Veronika Palfi had seven points each.  Laurie Calixte tossed in four points and then Da’Nae Williams, Vera Gunaydin, Maeve Fotsa Fofou and Fanta Gassama closed out the scoring with two points each. 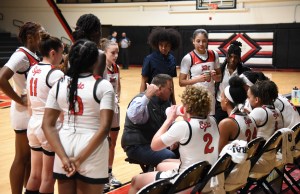 SGTC Head Coach James Frey talks to his team during a timeout.
Photo by SGTC Athletics

The Lady Jets will travel to Macon on Wednesday, December 14th to play Central Georgia Tech, who is 1 – 4 in the conference and 5 – 6 overall.  That game is at 5:30 p.m.  The Lady Jets will hit the road again on December 20th.  They will go to Tallahassee, FL, to face Tallahassee Community College at 1 p.m.

The Lady Jets will host Georgia Highlands College at 1 p.m. on January 7th and the Jets will match-up with East Georgia State College at 3 p.m. that day in a double-header.