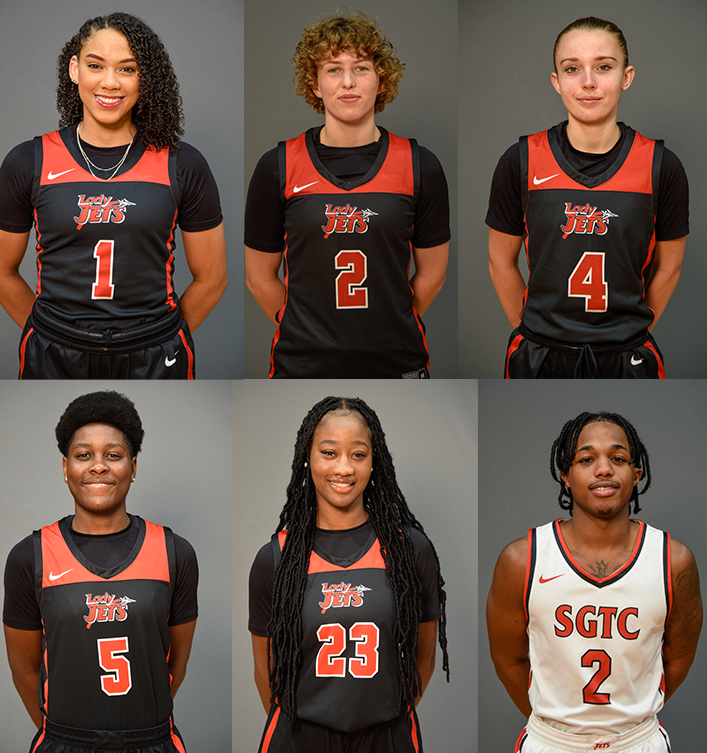 Shown above are the six Lady Jets and Jets players that are listed nationally for their individual accomplishments this season. Shown on the top row are: Lady Jets Luanna Leite, 1, Loes Rozing, 2, Veronika Palfi, 4, On the bottom row are Alexia Dizeko, 5, Fanta Gassama, 23, and Samaj Henderson, 2. Photo by SGTC Athletics

AMERICUS – The South Georgia Technical College Lady Jets moved up three spots into 4th place in the National Junior College Athletic Association’s (NJCAA) Division I women’s basketball poll released this week.  The Lady Jets moved up from 7th place after securing three back to back wins and moving to 12 – 1 on the season. The Lady Jets only loss this season was to the second ranked Gulf Coast State College Lady Commodores in the season opener.

Eastern Florida State moved into first place in the national rankings with a 13 – 0 record.  Gulf Coast is currently in second place with an impressive 11 – 0 performance.  Southern Idaho is third and South Georgia Technical College is fourth with identical 12 – 1 records.  Blinn closed out the top five spots with an 11 – 1 season.

Trinity Valley, Northwest Florida State, McLennan, Collin County, and Casper closed out the remaining top 10 positions in descending order.  SGTC is still the only Georgia college listed in the top 25 teams in the nation.

In addition to its 4th place ranking in the national poll, the SGTC Lady Jets also had five players to be recognized for their individual efforts on the court.  The SGTC Jets, who are struggling with a 3 – 7 start to the season, had one player also currently ranked nationally for his skills on the court.

Lady Jets sophomore guard Alexia Dizeko, 5’ 11” from Sion, Switzerland, is currently tied for 28th in total points scored this season with 203.  She is also ranked 42nd in the nation in field goal percentage shooting making 56% of her shots and averaging 15.6 points per game.

Freshman guard Veronika Palfi, 5’ 6” from Pecs, Hungary and sophomore guard Luana Leite were both ranked nationally for their three-point percentage shooting.  Palfi is 25th in the nation.  She has hit 45.7 percent of her three-point attempts.  Leite is in the 29th spot.  She makes 43.6 of her three-point shots.

The fifth Lady Jet featured was sophomore point guard Loes Rozing, 5’ 10”.  She is ranked 20th in the nation in assists averaging 5.0 per game over 13 games.

Sophomore transfer guard from Chicago, Il, Semaj Henderson was the only Jet listed in the national rankings this week.   He is currently listed as 15th in the nation in assists per game averaging 5.18.  He is also tied for 23rd best in steals per game with a 2.5 average after 10 games.

The Jets will finish the 2022 part of the season on the road.  They travel to Panama City, FL to face Gulf Coast State College on December 14th at 7 p.m. CST.  They will participate in the Florida Southwest Classic on December 29th and 30th.  They open with State College of Florida in the Ft. Myers game and then end the year with a match against Florida Southwest College.

In the Lady Jets Holiday Classic, three of the top four teams in the NJCAA Division 1 rankings will be playing on the SGTC campus but they will not play each other.  On Friday, December 30th the second ranked Gulf Coast team will play Chattahoochee Valley Community College at 1 p.m., Central Georgia Tech will play St. Pete at 3 p.m., Snow College will face the number one Eastern Florida team at 5 p.m. and Shelton State will match up with Tallahassee at 7 p.m.

On New Year’s Eve, Gulf Coast will open up with St. Pete at 11 a.m., CVCC will face Eastern Florida at 1 p.m., Central Georgia Tech and Shelton State play at 3 p.m. followed by Snow and Georgia Highlands at 5 p.m.  The Lady Jets face Tallahassee at 7 p.m.

New Year’s Day will begin at 11 a.m. with Tallahassee and St. Pete playing at 11 a.m. followed by Shelton State and Eastern Florida at 1 p.m.  Gulf Coast and Georgia Highlands play at 3 p.m. and the Lady Jets take on Chattahoochee Valley Community College at 5 p.m. to end the tournament.