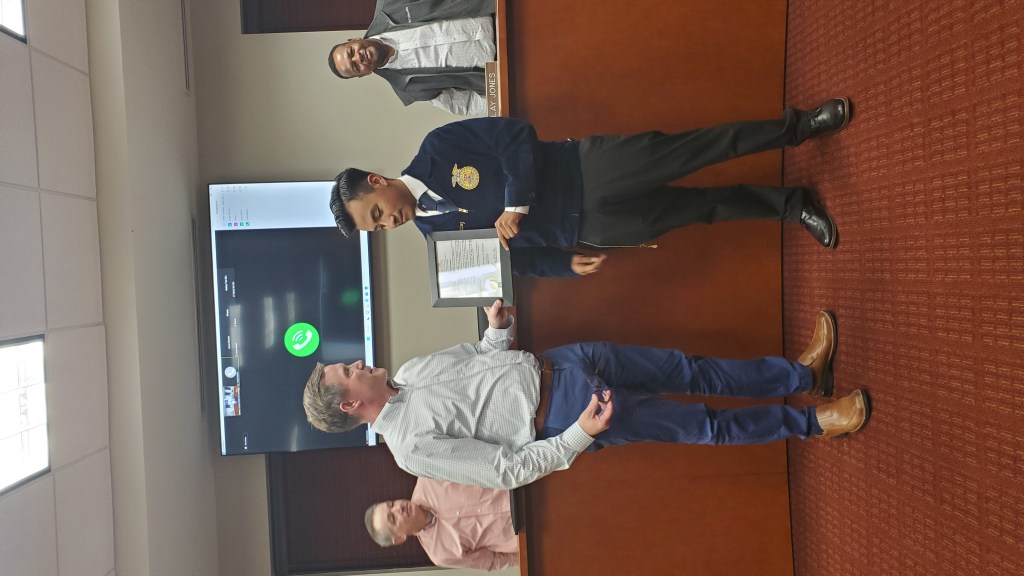 The Sumter County Board of Commissioners (BOC) met for their agenda setting meeting on December 13, 2022. All commissioners were present except for Jim Reid, who was excused. After citizen comments regarding zoning, Chairman Mark Waddell gave out two proclamations from the county. First up was Ignite CCA student, Joan Tovar-Martinez, who won a national competition through the FFA in grain proficiency. Joan also is the Georgia CCA Student of the Year. Having achieved national recognition in the agricultural field, Joan not only received a proclamation, but there will also be signage placed in the county proudly proclaiming we have a national champion living in Sumter County. Additionally, Waddell honored “retiring” Commissioner, Scott Roberson, who has served the county for four years, some of this time as vice chairman. Roberson did not seek re-election and David Baldwin will be representing the people of District Four for 2023.  All other commissioners will remain the same, Jessie Smith, Mark Wadell, Clay Jones and Jim Reid.

For the business of the night, the BOC heard three presentations. They approved Nigel Poole’s request to apply for Hazardous Mitigation Preparedness Grant, which is renewed every five years. This helps prepare for potential hazards. This is required by the state and is approved by FEMA. The municipalities in the county will also need to vote on this item. The item passed unanimously.

Sheriff Eric Brayant and Chief Jerry Harmon together discussed building a tower needed for ongoing more efficient radio coverage. The tower is located in Schley County at the E-911 center, from which our 911 calls are dispatched to first responders.  Although in Schley County, Sumter County has ownership of the tower. Harmon added the tower will need to be up by 1.24.23 due to an ISO inspection which the fire department is involved. They feel the completion will be done by this date.

A new roof for buildings at Sumter County Fire and Rescue Headquarters was discussed. The lowest bid out of five belongs to S&S roofing at approximately $119, 000. An additional warranty increases the cost to about $123, 000, however, S&S remained the low bid, the vote went to the regular meeting. The commissioners ratified an application for civic memorial policy and the Smarr Smith Foundation requested the portrait of Jody Smith and Nick Smarr which used to hang in the Americus Municipal Building to be hung in the courthouse. The BOC had already been in consensus over the policy and for the Smarr Smith Foundation to hang the portrait. This vote was ratified. The BOC considered ongoing contract for the Public Defenders for Superior Court. This passed unanimously. Jimbo Littlefield asked for replacing 72-inch corrugated metal pipes on Bear Branch Road. Littlefield was given a unanimous vote to post an RFP to have the job move forward. The BOC unanimously approved the county administrator to look into grant funding for the ongoing needs of solid waste infrastructure and recycling.

The county will take a look at zoning ordinances. The updates have not been made in over 20 years. Attorney Hayden Hooks requested an additional law firm to ensure the ordinances are correct and defensible. The estimate on the use of the attorneys is $10, 000. This item will go to the regular meeting. Lastly, the BOC approved the renewal of 16 Alcoholic Beverage Licenses and one appointment to an advisory board was made.

Under reports, Chief Harmon reported, together with the Sheriff’s Office, they have rescued two missing persons within a week. Both were successfully recovered. Tim Estes reported on recreation. There is record enrollment in the basketball program. Additionally, the Atlanta Hawks Grant has increased to cover some incidental items. Deatrice Harris reported on Human Resources and some of the activities which the employees will be taking place. Safety plans are being enhanced as well. Jimbo Littlefield gave an update on Public Works. There is a grant available to procure some technical assistance to help in winning grants which can further the work on the projects. The county administrator reported to the BOC there would need to be some consideration into recruiting and retention of employees. One of the issues brought forth was identifying minimum rates on positions.

Under comments, Smith asked for better lighting around an intersection on Sunset Drive. There was consideration to the issue. Volley reports the only lights the county pays for are on property the county owns.

The BOC held an executive session at the end of the meeting.

The next meeting of the BOC is December 21, 2022, at 6pm. The meetings are located in the courthouse and are open to the public.