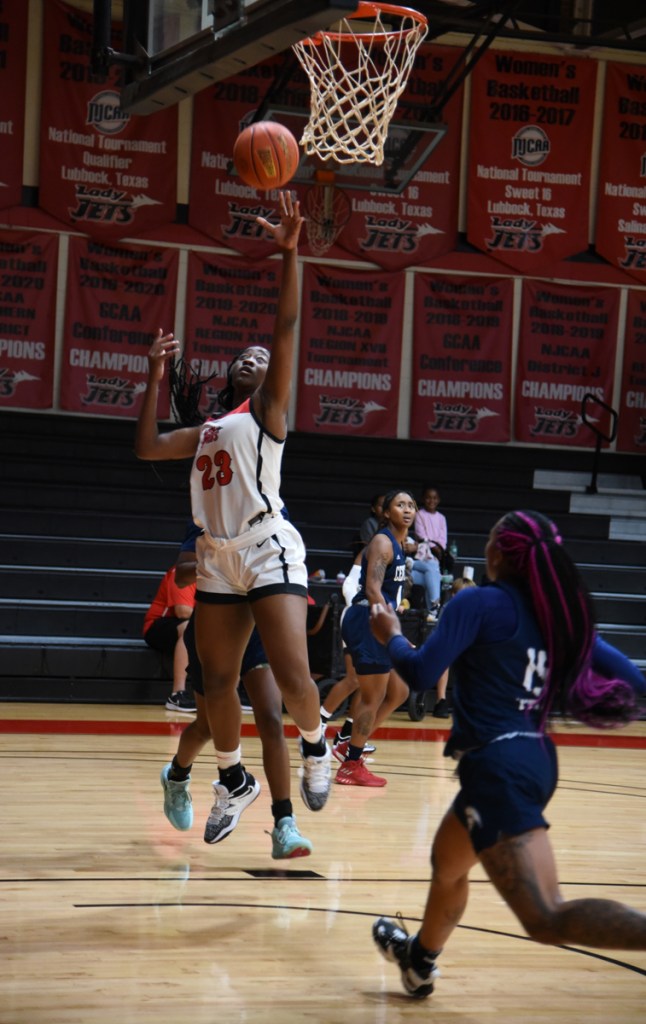 SGTC’s Fanta Gassama (#23) had a double-double night against Central Georgia Tech with 19 points and 19 rebounds. Photo by SGTC Athletics

“We did not play well at all in the first half,” said South Georgia Technical College Athletic Director and Lady Jets head coach James Frey after his team was up 12 – 11 at the end of the first quarter and was still only up by five with the score 26 – 21 at the half.

A strong third quarter by SGTC allowed the Lady Jets to breathe easier after they posted 23 points to Central Georgia Tech’s 12 to pull ahead 49 – 33.  Central Georgia Tech rallied in the fourth quarter and outscored SGTC 13 – 10 to make the final score 59 – 46.

SGTC’s starters did the majority of the scoring for the Lady Jets.  Sophomore center Fanta Gassama led the team in scoring with 19 points and also led the team in rebounding with 19.  She also had three assists, one steal and two blocked shots on the night.

Sophomore Camryn James also had a double-double night contributing 17 points and 10 rebounds in addition to two assists, two steals and three blocked shots.  Sophomore guard Luana Leite was the only other Lady Jet in double figures.  She had a total of 12 points, two rebounds, three assists and two steals. Sophomore forward Alexia Dizeko closed out the scoring for the starting five with seven points, eight rebounds, one steal, and one blocked shot.

The starting five played almost three quarters of the game against Central Georgia Tech and accounted for 55 of the teams 59 points.   Laurie Calixte came off the bench and tossed in two points and then Da’Nae Williams and Vera Gunaydin had one point each.

The Lady Jets will travel to Tallahassee, FL on December 20th for a 1 p.m. matchup with Tallahassee Community College.  They will return home on December 29th for a 6 p.m. game against Snow College and then host the Lady Jets Holiday Classic, Friday, Saturday, and Sunday, December 30th, 31st, and January 1st.

Three of the top four teams in the nation will be participating in the Lady Jets Holiday Classic.  Eastern Florida, Gulf Coast, and South Georgia Tech are ranked first, second, and fourth in the nation.    SGTC will not play on Friday.

On Saturday, December 31st, the games begin at 11 a.m. with Gulf Coast vs. St. Petersburg College followed by Chattahoochee Valley and Eastern Florida at 1 p.m.  Central Georgia Tech and Shelton State will play at 5 p.m. and then the Lady Jets will take on Tallahassee at 7 p.m.

The final day of the tournament will be on Sunday, January 1st.  Tallahassee will open against St. Petersburg at 11 a.m.  Shelton State plays Eastern Florida at 1 p.m. and Gulf Coast and Georgia Highlands meet at 3 p.m.  The Lady Jets close out the tournament at 5 p.m. against Chattahoochee Valley.