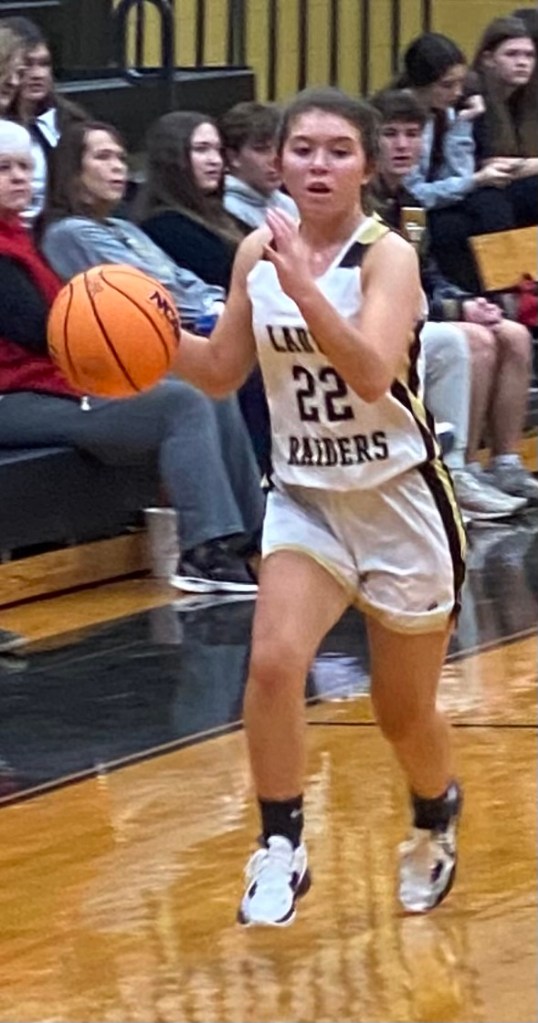 Southland Academy senior shooting guard Julia Caroline Bailey scored 23 points and drained five three-pointers in the Lady Raiders’ 64-40 victory over Lee-Scott Academy. Bailey hit two of her three-pointers early in the second half and it sparked a 10-0 run by SAR, which effectively propelled SAR to victory. Photo by Ken Gustafson

AMERICUS – The Southland Academy Varsity Girls’ Basketball Team (SAR) is now 8-0 on the season after a 64-40 victory over the Lady Warriors of Lee-Scott Academy (LSA) from Auburn, AL. The Lady Raiders had a nine-point lead at halftime, but SAR senior shooting guard Julia Caroline Bailey drained back-to-back three-pointers early in the third quarter and it sparked a 10-0 run by the Lady Raiders. From that point on, SAR was in total control of the contest and went on to secure its victory and improve to 8-0 on the season.

This was a game in which LSA tried top press the Lady Raiders full court for just about the entire game, but SAR was able to break that press time and time again and scored several fast break baskets as a result. In addition to Bailey’s hot shooting early in the second half that sparked that 10-0 run, the Lady Raiders also turned up their defensive pressure in the second half and pretty much shut down the Lady Warriors’ offense.

“We have a veteran group. They didn’t panic under pressure,” SAR Head Coach Eric Israel said. “They got it to the right spots and we were able to get some layups out of the press. We did shoot the ball really well. In the second half, we had an unbelievable defensive effort. We held them to 13 points in the second half and that’s how were able to blow the game open.” 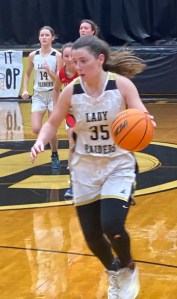 Bailey led all scorers with 23 points and drilled five three-pointers in the contest. Junior small forward Mary Beth Easterlin was also in double figures with 18 points and senior point guard Morgan Weaver poured in 16 points in the winning cause.

After a competitive first quarter, the Lady Raiders had a 16-13 lead. However, LSA outscored SAR 10-4 over the first three and a half minutes of the second quarter.

The Lady Raiders responded with two straight baskets to take a 24-23 lead, with the second basket coming on a fast break layup by Bailey with 3:26 to go before halftime. Then with 2:20 to go, Bailey drilled a three pointer to give SAR a 27-23 lead. Over the next minute or so, both teams traded baskets in a fast-paced, up-and-down affair until timeout was called with 1:07 to go with the Lady Raiders leading 32-27. 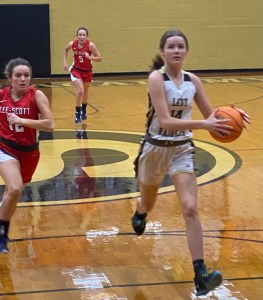 Out of the timeout, SAR had to deal with the full-court press of LSA, which the Lady Warriors had been doing the entire first half. However, the Lady Raiders had no problem breaking through that press and were able to score two more baskets to take a 36-27 lead into the locker room at halftime.

Easterlin led the Lady Raiders in first half scoring with 13 points and Bailey scored 10 of her game high 23 in the first half.

SAR took off in the early minutes of the second half. With a little over six minutes to go in the third quarter, Bailey hit back-to-back three-pointers to give the Lady Raiders a 42-27 lead. Bailey’s two three pointers to start the second half ended up being the beginning of a 10-0 run by SAR and it prompted LSA to call a timeout with 4:32 to go in the third quarter. During this run, the defense of the Lady Raiders was solid and the Lady Warriors were struggling from the field.

LSA continued to implement its full-court press, but to no avail, as the Lady Raiders continued to break it and were able to score some fast break baskets. By the end of the third quarter, SAR had a 48-33 lead. 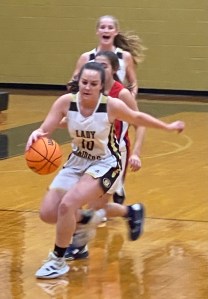 Throughout the final quarter, the Lady Raiders continued to dominate on both ends of the floor. They created turnovers on defense and they continued to break the LSA press and score points at the other end. They also continued to hit shots from beyond the arc, as both Easterlin and Bailey knocked down three-pointers near the end of the game to help the Lady Raiders earn their 64-40 win.

Mary Kathryn Harris led LSA in scoring with 12 points and Kate Dickerson scored 10 for the Lady Warriors in the losing cause.

SAR will hit the Melvin Kinslow Gymnasium hardwood once again on Tuesday, December 20 against the Lady Chiefs of the Lakeside School from Eufala, AL in the first game between these two teams in Eufala on Monday, December 12, the Lady Raiders defeated Lakeside 57-42. Tip off for Tuesday’s game is scheduled for 3 p.m.