On Saturday, December 17, hundreds gathered at Andersonville National Cemetery to pay tribute and honor to these fallen heroes buried here by placing wreaths on each and every one of the cemetery’s 20,300 tombstones as part of the annual nationwide Wreaths Across America event. Photo by Ken Gustafson

ANDERSONVILLE, GA – On Saturday, December 17, hundreds of people from Sumter County, nearby counties, other parts of Georgia and from other parts of the country gathered at Andersonville National Cemetery to take a couple of hours out of their busy schedules to pay tribute and to honor the 20,300 service members buried at the cemetery by placing wreaths on each and every one of the tombstones at the annual Wreaths Across America event.

Many of these people have relatives who are buried at Andersonville, while others just want to take time out of their busy schedules to honor these service members. 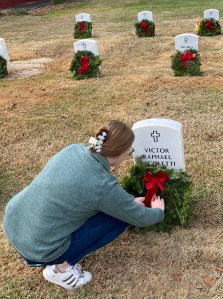 Hollie Burgess lays a wreath on the grave of Victor Raphael Nicoletti during the Wreaths Across America event at Andersonville National Cemetery.
Photo by Ken Gustafson

This annual event, which is done on the Saturday before Christmas, is done at more than 3,500 national cemeteries throughout the nation, at sea and abroad. The main objective of the event can be summed up in three words: remember, honor and teach.

“It’s to honor the people who are interred here,” said Susie Sernacker, Chief of Interpretation for the Andersonville National Historic Site. “The greater Wreaths Across America started sometime in the mid 1990s. The past few years, we’ve had a number of wreaths so this is going to be the second year that we’ve had enough wreaths to cover all of the burial sites.” According to Sernacker, last year was the first year that there were enough wreaths to cover all of the tombstones at Andersonville National Cemetery and the event has grown in the past two years.

“It’s just, in general, a big community event,” Sernacker said. “I had a man come out yesterday (Friday) to help us prep for the event. He said he was from one of the local electric companies and that he came on out to help us with that and he’s back again today to do the wreath laying,” Sernacker continued. 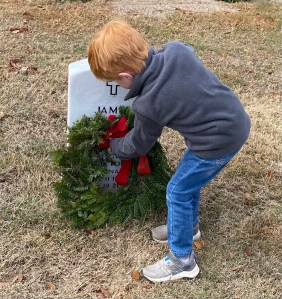 Walker Burgess, the son of Scott and Hollie Burgess, places a wreath on one of the tombstones at Andersonville National Cemetery at the Wreaths Across America event.
Photo by Ken Gustafson

According to information on its website: www.bennettig.com, the Bennett Family of Companies, headquartered in McDonough, GA, and the Taylor Foundation have raised enough money to haul over 65,000 wreaths to Andersonville National Cemetery so that all 20,300 graves will have a wreath placed on them.

According to Sernacker, at least 700 volunteers showed up at last year’s event to volunteer to lay wreaths and she estimated that 700 or more would be at this year’s event. 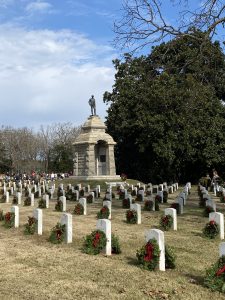 Volunteers continue to lay wreaths on each of the tombstones at Andersonville National Cemetery as part of the annual Wreaths Across America event.
Photo by Ken Gustafson

At 12 p.m., a ceremony took place at the main pavilion in the center of the cemetery at which wreaths were placed at the front of the pavilion to symbolically honor each branch of the U.S Armed Forces, as well as Prisoners of War (POWs) and those Missing in Action (MIA). Also, three veterans who passed away this year and who are buried at Andersonville National Cemetery were honored during the ceremony. Boatswain’s Mate Second Class Carl Israel, who served for eight years in the U.S. Coast Guard, Chief Master Sergeant Vernon L. Phillips, who served for 30 years in the U.S. Air Force (1961-1991) and was a Vietnam Veteran, and U.S. Army Staff Sargent Grover Wade Rogers, who served from 1968 to 1972 and was also Vietnam Veteran. After the ceremony, the crowd dispersed throughout the cemetery to lay wreaths on all of the 20,300 graves. 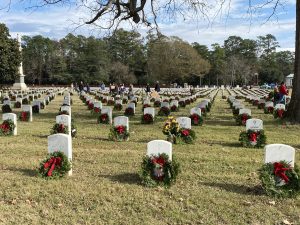 Volunteers are seen here placing wreaths on all of the tombstones at Andersonville National Cemetery during the annual Wreaths Across America event that was held on Saturday, December 17.
Photo by Ken Gustafson

Lee Gentry, Executive Vice President of the Bennett Family of Companies, stated that Bennett and the Taylor Foundation started in 2017 with bringing down half a load of wreaths. “Next year (2018), we got more involved as a company for Wreaths Across America,” Gentry said. “The whole thing behind Wreaths Across America is to remember, honor and teach. Remember those who have served, honor those who are serving today and teach our young people about freedom and that’s what Wreaths Across America (WAA) is all about,” Gentry continued. He went on to say that there are 3,500 national cemeteries nationwide and that a total of 2.75 million wreathes will be placed on the graves of those who have paid the ultimate sacrifice. “We work with ambassadors who are representatives to help raise money to lay these wreaths. They’re $15 a piece,” Gentry said. “We have to help purchase them to be able to lay them today. And today, we are honored to lay 20,300 wreaths at every tombstone here today,” Gentry continued. 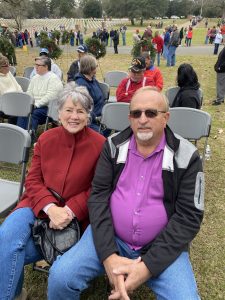 Garland Davis and his wife Kathy drove down from Atlanta to participate in the Wreaths Across America event. Kathy’s first husband, Thomas Clinton Jones, served in the U.S. Navy and is buried at Andersonville National Cemetery.
Photo by Ken Gustafson

According to information on its website: www.thetaylorfoundation.org, the Taylor Family Foundation helps to fund noble and honorable causes such as Wreaths Across America. The goal of the Taylor Foundation is to take a percentage of profits from their family business, which is Bennett International Group, LLC, to help fund honorable stewardships that affect communities nationwide. “We take 10 percent of our earnings and put it into the Taylor Foundation to help do like we’re doing today. We help provide money to help buy wreaths as well and different things behind the scenes,” Gentry said.

This is a picture of Marine Corporal Mark Forehand, who passed away from cancer a year ago. Corporal Forehand is buried at Andersonville National Cemetery and his brother, Mike Forehand, along with his mother, Betty Forehand and his sister, Lisa Adkins, were at the Wreaths Across America event on Saturday to place a wreath on Corporal Forehand’s grave and on many other graves throughout the cemetery.
Photo courtesy of Mike Forehand

Another family who was at the event to lay a wreath at their relative’s grave was the Forehands. Mike Forehand, along with his mother, Betty Forehand and his sister, Lisa Adkins, came a year ago to lay a wreath at the grave of Mike’s brother, Marine Corporal Mark Forehand, who died of cancer a year ago. “That was an experience,” Betty Forehand said. “It is amazing the amount of people that turn out…the volunteers and what they do,” Mike Forehand said. “We were just talking a while ago. They can put 20,000 wreaths up in probably an hour. It’s amazing. It’s just going to be a special place for us from now on.” 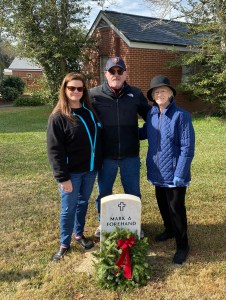 The WAA event will take place every year at this time at Andersonville National Cemetery and at 3,500 other national cemeteries nationwide, as well as some at sea and abroad. Each and every year at this time, it will be a time to remember those who have served, honor those who are serving today and to teach the nation’s children and young people about what freedom is really all about and that it is worth fighting for.