Circling up for Sarah: Double transplant patient perseveres to finish degree with the support of family, friends and the GSW community 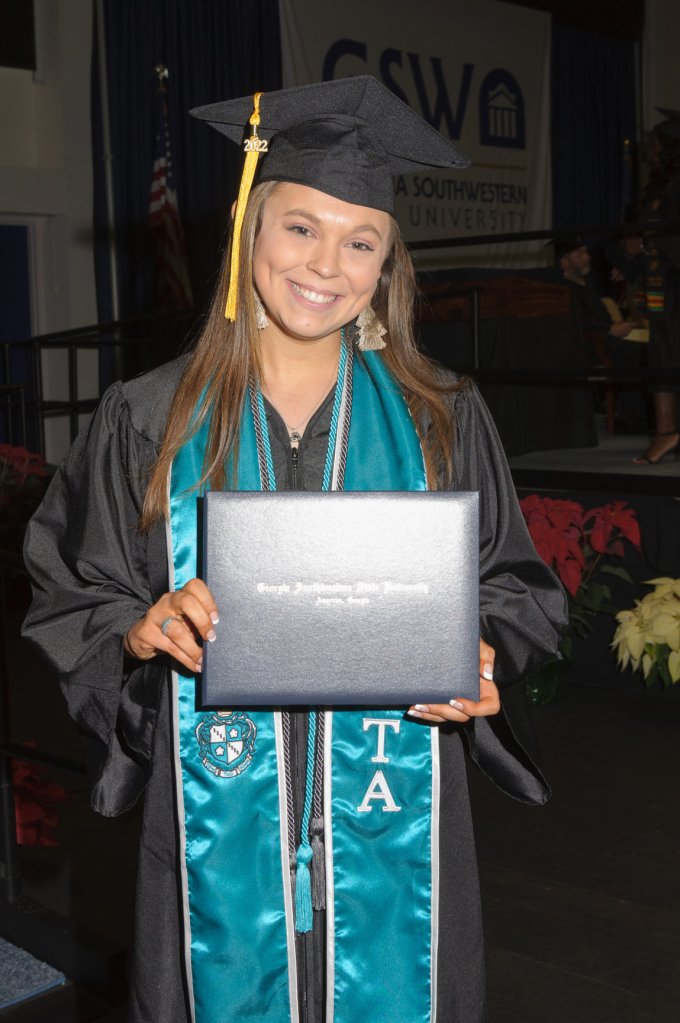 Sarah Mathis, a native of Statesboro, GA and a double transplant patient, was able to overcome numerous obstacles to earn her degree from Georgia Southwestern State University. Submitted Photo

AMERICUS – Every college graduate has a story to tell, a journey of facing obstacles through the course of their studies and pushing forward to make it across that stage on graduation day.

Considering the world has faced an unprecedented health crisis in the past two years with COVID-19, many recent graduates have dramatic stories to tell, whether the virus impacted their health, their schooling, their jobs, or all of the above.

And then there are some graduation stories that stand out; they leave a mark on us, lift us up, inspire us, and enlarge our faith in the human spirit—like the story of Sarah Mathis.

Sarah was born with biliary atresia—a rare, congenital liver disease that can only be cured by a liver transplant. With a combination of procedures and medications, doctors were able to control her condition for 18 years, until, as a senior in high school, Sarah underwent her first liver transplant in the fall of 2017. “I was strong and healthy at the time, but my medications weren’t as effective anymore,” says Sarah. “We knew at some point I would need a new liver…I was determined after my surgery to get back to school and finish my senior year.”

Sarah had grown up surrounded by a loving family in Statesboro, Ga.; her parents, Bill and Michelle, and younger sister, Emma, stood by Sarah’s side through all of her health challenges.

Reflecting on that first major surgery, Michelle says, “Once I received the call from Atlanta saying they had a liver, I had to go to school to get Sarah. I was a mixture of nerves and relief that it was finally happening. I was worried about her physical health, of course, but her mental health as well…but she was so determined to meet whatever goals the doctors and nurses set for her. I saw how hard she worked every day at the hospital and at my sister’s house in Atlanta where we stayed after her surgery. She was able to recover enough to play tennis in the spring, go to prom, dance in her last recital and walk at her high school graduation. She made me a very proud mom.”

Sarah was ready to branch out after her recovery, even defying her doctor’s orders to stay close to home for college. She chose Georgia Southwestern State University (GSW) because she observed the same close-knit community she valued in Statesboro. Despite Sarah’s confidence in her decision, she admits it was quite intimidating being on campus for the first time. “I didn’t know a soul,” recalls Sarah, who describes herself back then as extremely shy and introverted. “I met my roommate on Storm Day, and she encouraged me to rush, which I’m so glad I did, because I met some of my very best friends during recruitment for Zeta Tau Alpha.”

Sarah raves about the mentoring she experienced while at GSW, how it allowed her to come out of her shell, teaching her to be a leader. She increasingly took on leadership roles in the Student Government Association Executive Board, the Zephyr program and the GSW Marshals. “My favorite experience was the opportunity I had with the Marshals to attend the Christmas party at the Weavers’ home, greeting GSW donors, sponsors, faculty and staff and building relationships with them.”

By all accounts, Sarah was thriving as she entered her senior year of college, with one exception: she was experiencing more frequent spikes in blood tests that measured the health of her liver. These abnormal levels would send her to the hospital for 2-3 days at a time to receive IV steroids.

Sarah’s health began a rapid decline during the fall semester of 2021 with an increase in food intolerances, nausea and vomiting—all signs of a waning immune system.

By October 2021, Sarah had to spend a week in the hospital. While there, she received the crushing news, when doctors told her they would have to start the testing and paperwork to put her back on the transplant list. “I was so frustrated,” says Sarah. “It didn’t seem fair…all my friends were 21, living their college life, having so much fun, and I missed being with them…the same thing had happened to me in high school, and it was happening again.”

With the constant threat of COVID and Sarah’s weakened condition, she and her family decided it was best that she move back home and work on her studies remotely.

In December 2021, on the Friday before Christmas, Sarah decided to meet up with a small group of friends in Americus, some of whom were graduating and a few who had graduated the previous spring, to celebrate their accomplishments. Sarah attended the graduation ceremony, and they all went out to dinner and enjoyed the weekend catching up.

By Monday morning, Sarah became so ill that her parents drove from Statesboro to pick her up.

“By the day after Christmas, I couldn’t keep anything down…my dad took me to get a COVID test, and I tested positive, but I ended up in the ER because I was as yellow as a highlighter, and I was hallucinating.”

Sarah was experiencing the symptoms of rapid liver failure, and she was life-flighted to Emory University Hospital that same night.

“Only one person could be with her in the hospital [in Statesboro], which was Michelle,” says Sarah’s dad, Bill, recalling the intensity of that day. “I sat in the parking lot all day in my truck getting text updates; finally it was arranged for her to be transferred by what we thought would be an ambulance to Emory. The sun had gone down, and I was sitting in my truck watching ambulances pull up, wondering which ambulance was going to take my daughter to Atlanta. I noticed the landing lights come on for the air evac helicopter to land, and I wondered who they were bringing to the hospital. About that same time I got a text from Michelle that the helicopter was coming for Sarah. We watched them load her up and take off, and at the same time I found out we could not be there. That messed me up. As a daddy, I am the protector. I am the fixer. I couldn’t do anything but pray…so we prayed!”

Because of Emory’s strict COVID protocols, Sarah’s family was not allowed to visit her in the hospital until fourteen days later. Even worse, she could not be placed on the transplant list until that same time, when she would be considered COVID-negative. Bill took a seven-hour round trip to deliver some of Sarah’s personal items to her in Atlanta the day after she was admitted. “I got to the hospital and took her things to the front desk, hoping I could go to the nurses’ station,” says Bill. “They informed me I couldn’t go any further. I dropped her stuff and walked back to my truck…I sat there for at least an hour trying to compose myself to drive home…I didn’t want to leave.”

Sarah spent two grueling weeks battling alone in the hospital, enduring frequent trips to the ICU when her oxygen and blood pressure would drop suddenly in the middle of the night.

On January 6, 2022, Sarah was reunited with her family and was placed on the transplant list. On January 11, (“the night the Georgia Bulldogs won the championship,” Sarah is sure to point out) she was taken back for her second liver transplant.

The day after surgery, Sarah woke up unable to speak because of the ventilator, drowsy from the anesthesia but being forced to stay awake by the medical staff. Complications from the previous transplant and long hours spent under sedation had prevented doctors from closing her wound, and two days later they took her back into surgery, which meant several more days on a ventilator.

Once the second transplant was done, it was time for the hard work of recovery to begin. “I had been there a month,” recalls Sarah. “I missed my family, and I had been lying in bed for a month…I had no muscle left.” Sarah had to undergo painful physical therapy to walk, bend, change her clothes, brush her teeth and eventually walk up stairs, none of which had been a problem after her first transplant.

Through the entire ordeal, Sarah was upheld by her friends, family, and the compassionate community at GSW.

“I had friends from college constantly sending me packages, texting and calling me. They still call me regularly…they are the kind of friends who only come once in a lifetime.”

Sarah was able to return to her remote classwork in March, and with the help of her GSW professors, was able to graduate with honors and a Bachelor of Science in Psychology on December 9 of this year. “I know I wouldn’t have graduated if Dr. [Gary] Fisk, Dr. [Ellen] Cotter, and Dr. [Laura] Boren hadn’t put in so many extra hours to help me get the work done. They didn’t have to care, but they pushed me to do my best. I could tell they wanted to see me succeed like I was their own.”

Sarah expresses immense gratitude for the community at GSW and her hometown of Statesboro who “circled up to support me and my family through everything.”

As for post-graduation plans, she recently accepted a position with Union Mission as an emergency services case manager, which allows her to assist low-income families struggling financially due to medical crises. “I can’t tell you how much joy I have in this new job,” says Sarah, who feels a sense of purpose in helping other families navigate the difficulties of health crises.

Sarah lives in Statesboro with her sister, Emma, and their two dogs, Alfie and Bailey. On her sister’s journey, Emma says, “Sarah has inspired me to always keep my head up no matter the circumstances. She’s taught me to love with all of my heart and to always be brave.”