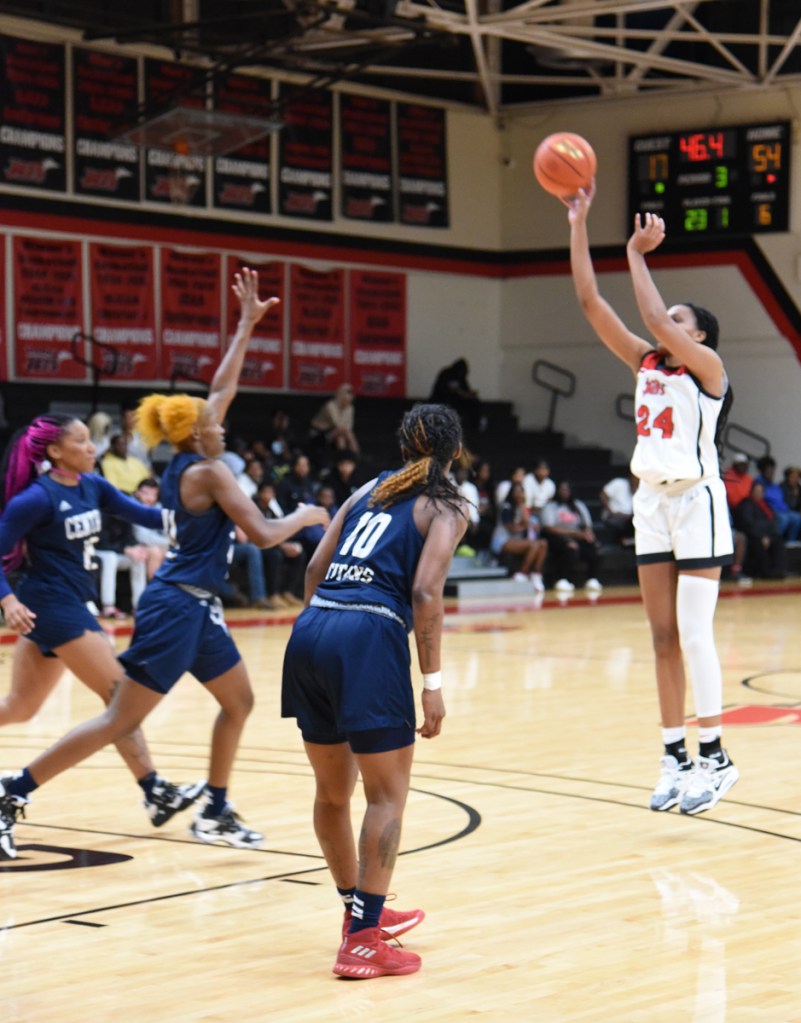 SGTC’s Camryn James (#24) scored 35 points for the Lady Jets in wins over Central Georgia Tech and Tallahassee Community College on the road over the Holiday break. Photo by SGTC Athletics

Sophomore center Fanta Gassama was the top scorer for the Lady Jets with a double-double night.  She had 19 points and 19 rebounds along with three assists, one steal, and two blocked shots.  She was joined in double-figures by sophomores Camryn James and Luana Leite.

James had a good night with a double-double as well.  She walked away with 17 points, 10 rebounds, two assists, two steals and three blocks.  Luana Leite closed out the double digit scoring with 12 points, two rebounds, three assists and two steals.

Following that conference win, the Lady Jets traveled to Tallahassee and took their 14th consecutive win of the season, 75 – 56 over Tallahassee Community College which fell to 2 – 11 overall.

The game was never in doubt but Tallahassee did put together a strong second quarter to outscore the Lady Jets 18 – 17 and make it 35 – 30 at the end of the first half.  The Lady Jets outscored Tallahassee 40 – 26 in the second half to walk away with the 75 – 56 win.

Four Lady Jets scored in double digits in that game.  Camryn James led the team in scoring with 18 points and she was followed by Fanta Gassama and Alexia Dizeko who added 17 points each.  Luana Leite accounted for 11 points in that match-up.  Loes Rozing scored seven points to round out the starting five scoring.  Laurie Calixte came off the bench to score four points and then Veronika Palfi had one point.

The Lady Jets will attempt to stretch their win streak to 15 points tonight when they host 12th ranked Pensacola State at 6 p.m. in the Hangar on the Americus campus as a precursor to the SGTC Lady Jets Holiday Classic Tournament, December 30th – January 1st.