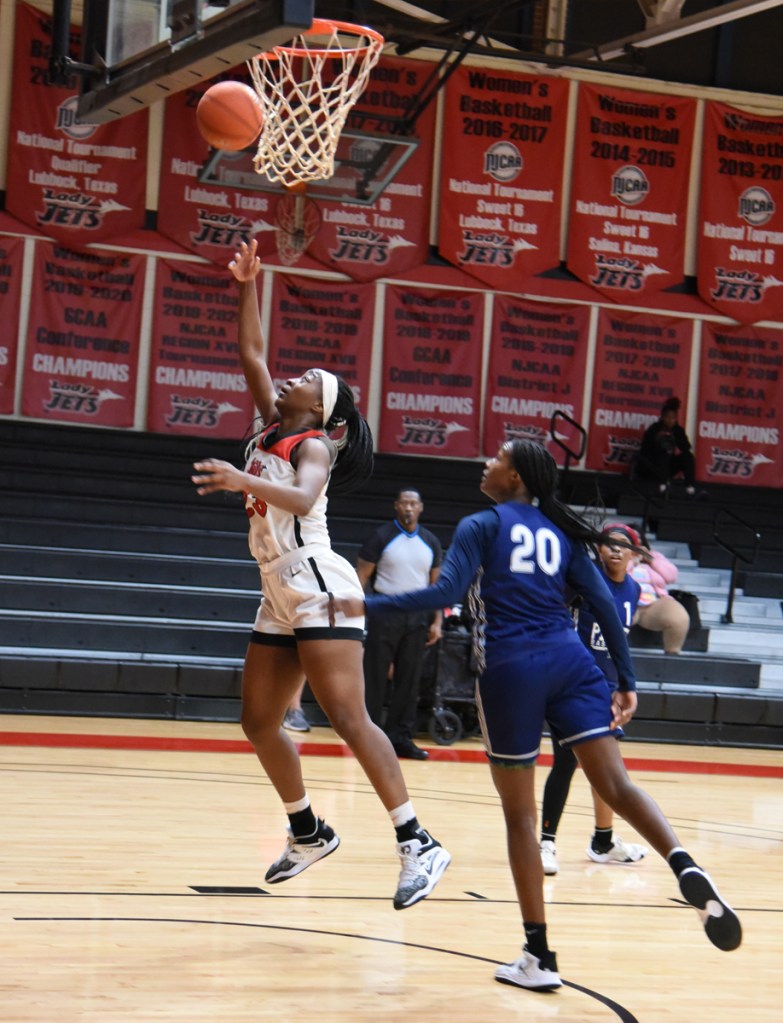 “I thought we played good, but we still had way too many turnovers,” said South Georgia Technical College Athletic Director and Lady Jets head coach James Frey.  “I was very proud of the intensity that we brought to the game, but we still have lots of room for improvement.”

The win over Pensacola allowed the Lady Jets to improve their win streak to 15 straight games and improve their overall record to 15 – 1 and remain 6 – 0 in the Georgia Collegiate Athletic Association (GCAA).  The Lady Jets only loss this season was in the opening game against Gulf Coast, which is currently ranked two spots ahead of them in the NJCAA National Rankings.

Three Lady Jets managed to score in double digits to lead South Georgia Tech to the 11-point victory over Pensacola.  Sophomore center Fanta Gassama fouled out in the fourth quarter but still managed to be the leading scorer with 13 points and also tie as the leading rebounder with nine.  She also had three assists, one blocked shot and one steal.

Sophomore forward Alexia Dizeko was the second leading scorer for the Lady Jets with 12 points and nine rebounds.  She had three assists, a blocked shot and a steal.  Luana Leite, sophomore guard from Brazil, was the other Lady Jet in double digits and she tossed in 11 points, had three rebounds, three assists and two steals.

Gabriela Bendeck-Giron and Brianna Lopez were the only Pensacola players to break into double digits and they both led the Lady Pirates in scoring with 11 points each.

The Lady Jets scored first in the contest and was up 17 – 16 at the end of the first quarter.  They stretched that lead to five points 30 – 25 at the half.  There were two lead changes and three ties in the first half.  South Georgia Tech came out in the second half and stretched their lead to 14 points before taking the final 68 – 57 victory.

On Saturday, December 31st, Gulf Coast will open again against St. Petersburg College with an 11 a.m. game.  Chattahoochee Valley and Eastern Florida will matchup at 1 p.m. and Central Georgia Tech will take on Shelton State at 3 p.m.  The SGTC Lady Jets will take on Tallahassee Community College at 5 p.m. on New Year’s Eve.

The tournament will wrap-up on New Year’s Day, Sunday, January 1st with Tallahassee Community College and St. Petersburg College taking the court at 11 a.m.  Shelton State will face the top-ranked Eastern Florida team at 1 p.m. followed by Gulf Coast and Georgia Highlands at 3 p.m.  South Georgia Tech and Chattahoochee Valley Community College will have the last game of the tournament at 5 p.m.