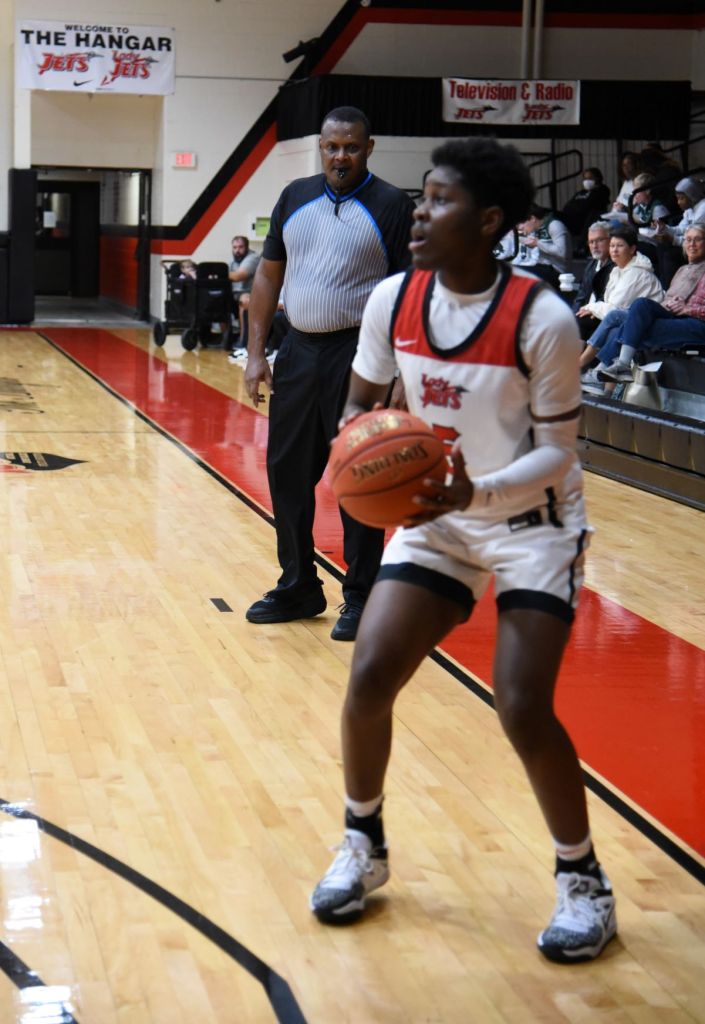 South Georgia Technical College sophomore Alexia Dizeko (#5) was the top scorer for the Lady Jets in their Holiday Classic games with 19 points against Chattahoochee Valley and 16 points against Tallahassee Community College. Photo by SGTC Athletics

“It was a great tournament,” said South Georgia Technical College Athletic Director and Lady Jets head coach James Frey.  “It is rare that you have four of the top 12 ranked teams in the country competing in the same holiday classic, especially in Americus, Georgia. In addition to great basketball, it provided an economic boost for our community to have nine teams from three states staying in hotels and eating in local restaurants over the Holiday break. There were also a lot of four-year coaches and scouts in the gymnasium looking at this junior college talent.” 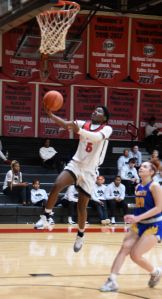 Alexia Dizeko scores on a layup in the Lady Jets Holiday Classic.
Photo by SGTC Athletics

The Lady Jets, which are ranked 4th in the nation, came away with three wins.  SGTC defeated 12th ranked Pensacola State College on Thursday in the precursor to the tournament 68 – 57.  Then they came back and handed Tallahassee Community College a 76 – 55 defeat and overpowered Chattahoochee Valley Community College 82 – 54.

The Lady Jets are now 17 – 1 and are riding a 17-game win streak.  Their only loss this season was a 76 – 61 loss to Gulf Coast State College in the opening game of the season.  Gulf Coast is currently ranked second in the nation and should move up this week after Eastern Florida’s loss to Shelton State.

Shelton State, from Birmingham, AL, had a great tournament. The Bucs went 3 – 0, including the upset 60 – 44 win over Eastern Florida. Shelton State is now 11 – 3 on the season, but their three losses came early in the season against nationally ranked Jones College, Walters State Community College and Florida Southwestern State College.  Jones was ranked 10th, Florida Southwestern was 17th and Walters State was 22nd in the nation. 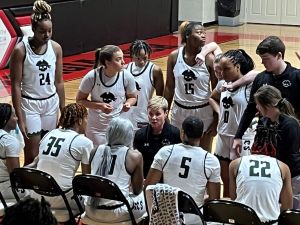 Shelton State Community College head coach Madonna Thompson is shown above talking with the Lady Bucs during a timeout in the upset over Eastern Florida.
Photo by SGTC Athletics

Shelton State’s other two wins in the Lady Jets Holiday Classic featured a 76 – 45 victory over Tallahassee Community College and an 88 – 45 decision against Central Georgia Technical College from Macon, GA.

Gulf Coast, the NJCAA’s second ranked team in the nation, also walked away with three victories in the Holiday Classic.  They opened the tournament with a 75 – 64 win over Chattahoochee Valley Community College from Phoenix City, AL. They then rolled to a 75 -66 decision against St. Petersburg College and posted an 80 – 65 victory over Georgia Highlands.

The top-ranked Eastern Florida Titans were 2 – 1 on the weekend.  They opened up with a 70 – 47 win over Pensacola State College on Friday and then followed up with a 78 – 54 decision against Chattahoochee Valley before losing to Shelton State on Sunday.

Twelfth ranked Pensacola ended up with two losses, including the one to the SGTC Lady Jets on Thursday and the 70 – 47 loss to Eastern Florida.

St. Petersburg was able to come away 2 – 1 on the weekend.  They earned a 70 – 44 victory over Central Georgia Tech on Friday before falling to Gulf Coast 75 – 66 on Saturday. They bounced back to defeat Tallahassee Community College 88 – 77 on Sunday.

In South Georgia Tech’s two wins in the actual tournament, sophomore Alexia Dizeko was the top scorer for the Lady Jets in their 76 – 55 win over Tallahassee with 16 points and then she scored 19 points in the 82 – 54 match-up against Chattahoochee Valley.

Four Lady Jets were in double figures in the Tallahassee victory.  Dizeko led the way with 16, followed by Fanta Gassama with 14 points and 15 rebounds and both Camryn James and Luana Leite who had 10 points each.

Laura Calixte tossed in seven points for the Lady Jets in that game and then Loes Rozing and Da’Nae Williams accounted for four points each.  Mame Thiaw had three points and Susana Yepes, Vera Gunaydin, and Maeve Fotsa Fofou closed out the scoring with two points each.

In the victory over Chattahoochee Valley Alexia Dizeko led the scoring with 19 points followed by Fanta Gassama who had 17 points and 19 rebounds.  Camryn James and Luana Leite both scored 11 points to close out the double-digit scoring.

The Lady Jets will play at home on Saturday, January 7th in a conference game against Georgia Highlands in a double-header with the Jets.  The Jets will face East Georgia in their first conference match-up of the season at 3 p.m.  The Jets are currently 3 – 8 on the season.  They travel to Florida Southwestern College today for a 7 p.m. game and then face the State College of Florida, Manatee-Sarasota on Tuesday, at 2 p.m. at Florida Southwestern before returning home to face East Georgia.