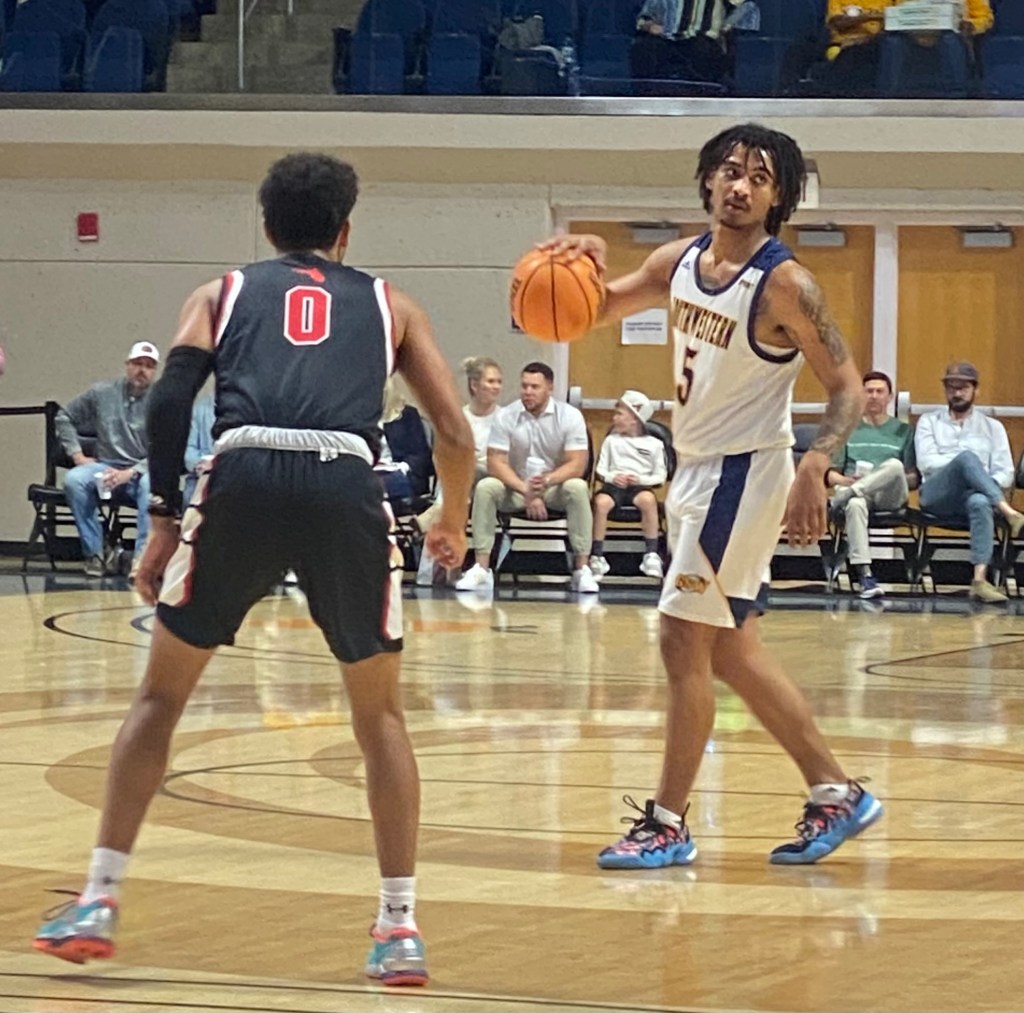 GSW junior guard Phillip Burwell led the Hurricanes in scoring with 18 points and dished out seven assists in their loss to Flagler College. Photo by Ken Gustafson

AMERICUS – Georgia Southwestern State University (GSW) men’s head basketball coach Aaron Coombs knew that if his club could neutralize the three-point shooting ability of Flagler College (FC), the Hurricanes would have a great chance for a victory. However, the very thing that Coombs told his team to do, guard the three-point line, the Hurricanes could not do. As a result, the Saints drained 15-31 three-point attempts (48.4 percent) and ended up handing the Hurricanes an 83-72 defeat at the Storm Dome on Wednesday night, January 11.

After the game was over, a perplexed Coombs stated that he knew that Flagler was a great three-point shooting team and that he stressed to his guys the importance of not letting the Saints get off any three-pointers, but it was to no avail. Over half of FC’s scoring output, 45 points, came from beyond the arc and it indeed played a key role in GSW’s loss to the Saints.

With the loss, the Hurricanes fall to 7-6 overall on the season and they are now 1-4 in the Peach Belt Conference (PBC). 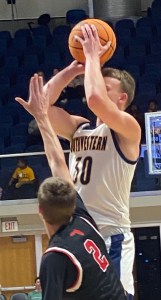 Three Hurricanes scored in double figures. Phillip Burwell led GSW in scoring with 18 points, Brian Tolefree poured in 15 and Devon Higgs posted a double double with 10 points and 12 rebounds for GSW in the losing cause. As for FC, three players scored 20 points or more. Kyle Young led all scorers with 23 points and drained four three-pointers. Jaylen Lemons poured in 21 points with 15 of those points coming on five made three-pointers and Malik Bryant scored 20 points with nine of them coming on three made shots from beyond the arc.

Another factor in the Hurricanes’ loss was bench work, as Flagler’s bench outscored the Hurricanes’ bench 31-15. In addition to the Saints’ bench outperforming that of GSW, another major factor that contributed to the outcome was poor free throw shooting on the part of the Hurricanes. GSW only converted 8-17 foul shots (47.1 percent). As for the Saints, they made 18-27 free throws (66.7 percent). 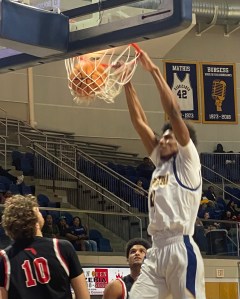 Over the first six minutes of the first half, it was a tightly contested affair with the Saints leading 9-8. Both teams continued to match each other over the next few minutes, but Jaylen Lemons gave the Saints a 14-11 lead on a three-pointer from the top of the key before timeout was called with 10:20 left in the first half.

Out of the timeout, the Hurricanes outscored FC 6-3 over the next two minutes and tied the game at 17-17. Both teams continued to trade baskets over the next few minutes, but Lemons struck again from beyond the ark to give the Saints a 25-21 lead with 6:37 to go before halftime.

However, the Hurricanes wouldn’t go away. They went on a 4-0 run to tie the game at 25-25 and would later take a 27-26 lead on a basket from Jamari Dean. Then over the final three minutes, GSW went on a 6-4 run that included two fast break slam dunks from Jerroda Briscoe and Devon Higgs. As a result, the Hurricanes had a 33-30 lead at the half. 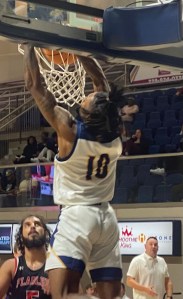 However, things changed over the first seven minutes of the second half, as the Saints went on a 20-7 run and capped it off with a three-pointer from Malik Bryant.

Nevertheless, the Hurricanes fought back and cut their deficit to 52-46 on a basket from Lars Nilsen at the 11:59 mark. Having been fouled on the play, Nilsen made the foul shot to complete the three-point play and GSW was within five of FC at 52-47.

However, just as GSW was making a run to get back in the game, the Saints went on another 5-0 run of their own to take a 57-47 lead, capping it off with another three-pointer from Lemons. Over the next minute or two, GSW struggled offensively and the Saints took advantage by going on a 6-3 run to take a 63-50 lead, prompting Coombs to call a timeout with 7:55 left. 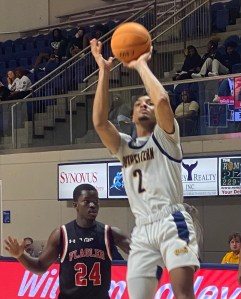 Out of the timeout, Burwell gave the Hurricanes and their fans some hope when he drained a three-pointer, but that hope was short lived, as the Saints continued to drain shots from beyond the arc. With 4:50 to go in the game, the Hurricanes were trailing 73-58.

With 4:19 remaining, Burwell struck again with a jumper to bring GSW within 13 at 73-60 before timeout was called. However, there would be no dramatic come-from-behind victory for GSW on this night, as the Saints would go on to defeat the Hurricanes 83-72.

GSW will try to rebound from this setback when they travel to Aiken, SC on Saturday, January 14 to take on the Pacers of the University of South Carolina-Aiken. Tip off is scheduled for 3:30 p.m.