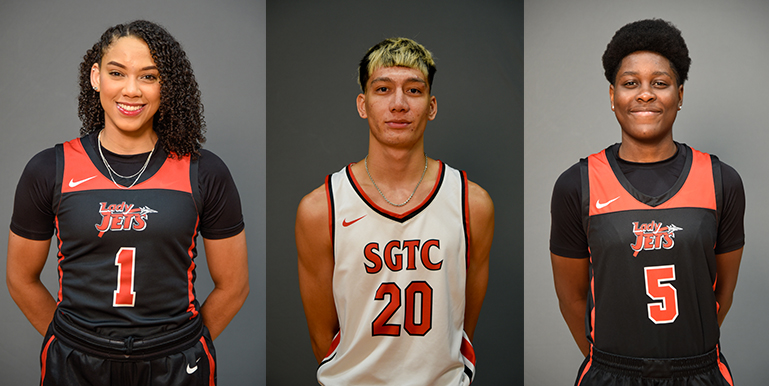 Shown above are the SGTC GCAA Players of the Week: Luana Leite (#1), Nathan Wilson (#20) and Alexia Dizeko (#5) Photo by SGTC Athletics

AMERICUS – Three of the South Georgia Technical College Lady Jets and Jets basketball players have earned Player of the Week honors from the Georgia Collegiate Athletic Association (GCAA) for their conference play over the past two weeks.  The top-ranked National Junior College Athletic Association Lady Jets are now 20 – 1 overall and 8 – 0 in the conference and the Jets are 2 – 2 and 5 – 12 overall.

Luana Leite, sophomore guard from Sao Paola, Brazil, was selected as the GCAA Women’s Division 1 Player of the Week for her performance on the court in the January 16th announcement.  She scored 21 points, four rebounds, three assists and four steals in one win for the Lady Jets.

Sophomore forward Alexia Dizeko and sophomore forward Nathan Wilson were selected as the GCAA Players of the Week on January 9th.   This is the eighth time in nine weeks that the Player of the Week award has been given to a Lady Jet player and the second time this season that it has gone to a Jet.

Dizeko, 5’ 11” from Sion, Switzerland, scored 20 points, six rebounds, and five assists for the Lady Jets during the first week of January and Wilson, 6’ 8” from Auckland, New Zealand, was recognized after he averaged 12 points, 11.5 rebounds, and 1.5 blocks in two games for the Jets that same week.

Leite and Dizeko have now claimed the GCAA Player of the Week award twice this season along with sophomore center Fanta Gassama.  The other Lady Jets receiving this honor included: Camryn James and Veronika Palfi.

The Jets Aaron Pitts was selected as the Men’s Player of the Week in the November 7th standings.  He scored 18 points, two rebounds, one assist and three steals in a win over Gulf Coast in the opening game of the season.  Nathan Wilson is now the second Jet to be recognized.

The Jets defeated Albany Tech in Albany Thursday, 61 – 57.  They will play at home in the Hangar on Saturday, January 21st at 3 p.m. against Central Georgia Technical College.  They will have a make-up game at home on Monday, January 23rd at 7 p.m. against East Georgia State College.  Central Georgia Tech and East Georgia are both 1 – 2 in the conference at tied for 6th place.

South Georgia Tech will travel to Rome to face Georgia Highlands on January 28th at 3 p.m. The Jets and Lady Jets will both play at home on Wednesday, February 1st in a double-header.  The Lady Jets open at 5:30 against Central Georgia Tech and the Jets will follow at 7 p.m. against Andrew College.

The South Georgia Tech Jets are currently tied for fourth place in the GCAA with Gordon.  South Georgia State and Georgia Highlands are ranked one and two with 4 – 0 and 2 – 0 records and Andrew is third with a 2 – 1 record.

The Lady Jets are ranked first in the nation and first in the conference with a 20 – 1 and 8 -0 season.  They are followed by East Georgia State, 6 – 1 and 11 – 2 and Albany Tech at 3 – 2 and 9 – 7.  Georgia Highlands, Central Georgia Tech and Andrew College close out the rankings in fourth, fifth, and sixth place.