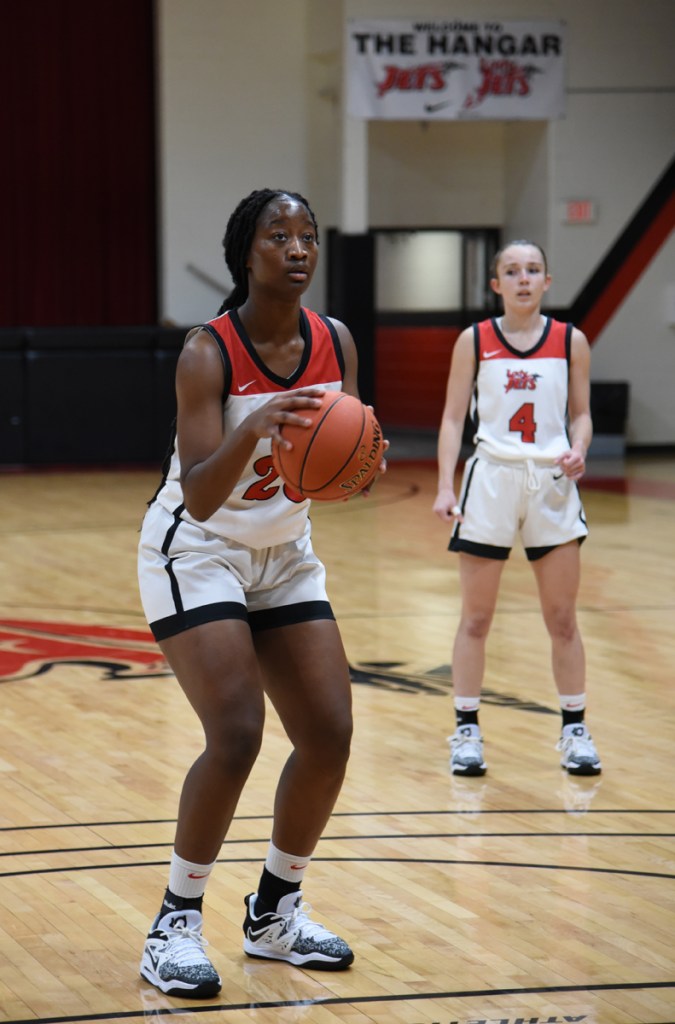 Fanta Gassama (23) led the Lady Jets in scoring against Albany Tech with 13 points and 16 rebounds. Photo by SGTC Athletics

AMERICUS – The top-ranked National Junior College Athletic Association (NJCAA) South Georgia Technical College Lady Jets (SGTC) rolled to an 83 – 42 Georgia Collegiate Athletic Association (GCAA) win over Andrew College and a 63 – 51 victory over Albany Tech on the road this past week to move to 21 – 1 and 9 – 0 in the conference.

The Lady Jets are currently the only undefeated GCAA Division I women’s team and they strengthen their hold on the top spot after defeating the 0 – 7 Andrew College Tigers and the 4 – 4 Albany Tech Titans.

SGTC Athletic Director and Lady Jets head coach James Frey did not play any of his regular starters in the 83 – 42 win over Andrew College but then utilized the entire team to secure the 63 – 51 victory over Albany Tech in Albany Saturday.

Freshman Veronika Palfi was the scorer for the Lady Jets in the 41-point win over Andrew with 17 points. She was three of four from the three-point line and seven of 10 from the field. She also had four rebounds, two assists and one steal. Da’Nae Williams and Mame Thiaw were close behind with 14 points each and then Maeve Fotsa Fofou closed out the double digit scoring with 13 points. Susana Yepes and Vera Gunaydin added nine and eight points respectively. Laurie Calixte and Isabel De Souza Bueno tossed in six and two points for the Lady Jets. 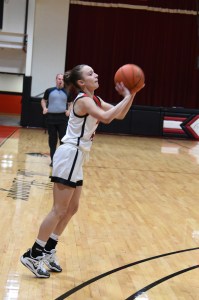 Veronika Palfi (4) was the leading scorer for the Lady Jets with 17 points against Andrew College. She was three of four from the three-point line.
Photo by SGTC Athletics

Despite the lopsided victory, Andrew was only down three points at the end of the first quarter (15 – 12). The Lady Jets stretched that lead to 36 – 25 at the end of the first half but opened things up in the third quarter outscoring Andrew 21 – 2. They continued to stretch the lead in the fourth quarter (26 – 15) to wind up with the 83 – 42 victory.

The Lady Jets traveled to Albany Tech on Saturday and struggled in the second half but still came away with the 63 – 51 decision. Fanta Gassama, Alexia Dizeko, and Luana Leite were the top scorers with 13, 12, and 11 points respectively. Susana Yepes came off the bench to added seven points and starter Camryn James walked away with six points.

Da’Nael Williams and Mame Thiaw both tossed in four points, Laurie Calixte had three, Loes Rozing, two and then Maeve Fotsa Fofou closed out the scoring with one point. Gassama had 16 rebounds and James came up with 10 on the night.